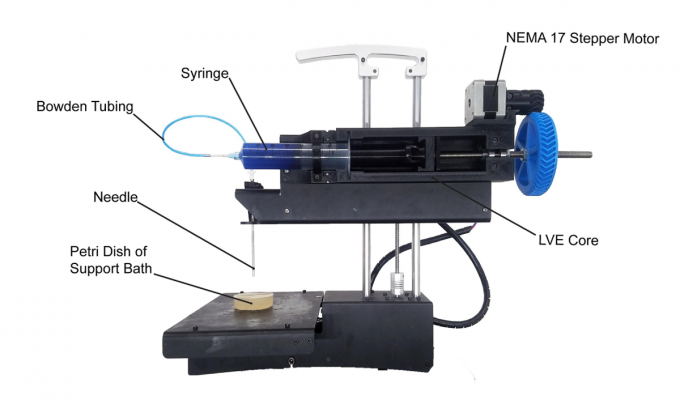 3-D printing… with living tissue? No, this isn’t Westworld, this is the real world. It’s a growing research trend called bioprinting and a team of Carnegie Mellon University engineers may have just made it much easier to print using biomaterials and fluids.

Printing with biomaterials is tricky, since they are more flexible and runny than your typical plastic or metal 3-D printing material. These machines usually comprise a small syringe printhead which dispenses biomaterial (usually within a bath of gel).

Here’s a video of Fienberg from a few years back, explaining how 3-D bioprinting works:

There’s great interest in this technology, which could revolutionize medical practices like drug testing and organ transplants.

The catch is that dedicated bioprinters can cost tens of thousands of dollars. There’s also a trade-off: you can either have a bigger syringe and, therefore, bigger print volumes, or a smaller syringe with better resolution.

WATCH: A bioprinter could also be used to print food–like in this PBS NewsHour web extra.

Feinberg’s team hopes to have opened the door to more affordable and user-friendly bioprinting.

“Most 3-D bioprinters start between $10K and $20K. This is significantly cheaper, and we provide very detailed instructional videos,” Feinberg said in a press release. “It’s really about democratizing technology and trying to get it into more people’s hands.”

Many components of their system, dubbed the large-volume extruder (LVE), can actually be made by the same off-the-shelf 3-D printers to which the system can then be attach. In other words, instead of buying a bioprinter, you can use your regular desktop 3-D printer to create a bioprinting attachment. If you already have the desktop printer, the cost of all the other hardware is a paltry $49.27.

Building cheaper, in this case, doesn’t mean building worse. Feinberg thinks they may have solved the volume/resolution tradeoff: “The large-volume extruder (LVE) 3-D bioprinter allows us to print much larger tissue scaffolds–at the scale of an entire human heart–with high quality,” he said in the press release.

Initial tests have been promising. Below is a compilation of biomaterial objects printed by the LVE.

To make this technology truly open source, the team has released all the files for parts design and included a tutorial video for LVE assembly in the paper. Let us know if you build one–and send us the pics of your biocreations!

WATCH: See how far 3-D printing has come since Miles reported on it for the PBS NewsHour in 2014.