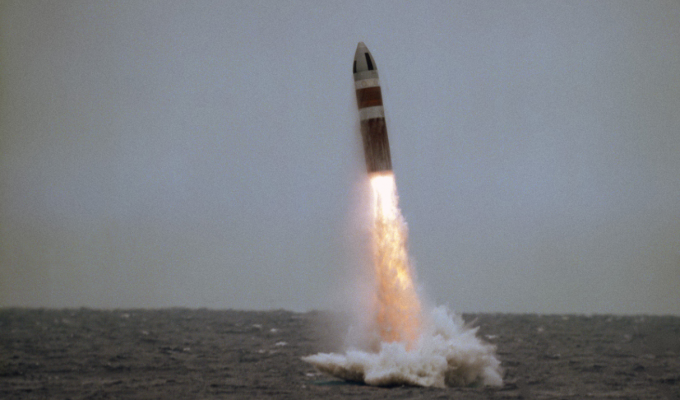 Nuclear warfare is more psychological than anything. Nowadays, there are multiple nuclear-armed states, holding bombs hundreds of times more powerful than those dropped on Hiroshima and Nagasaki. It is widely acknowledged that the next use of these weapons would augur civilization’s end.

That prospect is what has kept the nuclear genie in the bottle during the Cold War. The term of art is “Mutually Assured Destruction,” or “MAD.”

Still, the concept of deterrence has always been invoked to justify holding some amount of nuclear arms. Makes sense–you don’t want to be caught out in the cold of nuclear winter because you had nothing with which to threaten retaliation.

MAD only works if a nation amasses nuclear weapons and talks about it. But you don’t want to reveal too much lest your enemies steal your technological secrets.

North Korean nuclear threats should be viewed with MAD in mind. The hermit regime hasn’t kept it a secret, hoping to spring nuclear war on the world. On the contrary, they have invited and shown aspects of their nuclear program to a handful of westerners, including the former director of the Los Alamos National Lab, Sig Hecker.

And yet the Trump Administration has signaled that it sees more than deterrence in these foreign nuclear threats.

The 2018 Nuclear Posture Review, released early February, rolls out the Administration’s seemingly anachronistic thinking regarding U.S. nuclear policy. Presented by the Department of Defense and signed off on by Secretary of Defense Jim Mattis, it paints a dark picture of a world awash in nuclear weaponry and calls for a revitalization of U.S. capabilities. Here are some key action items requested in the document:

Many analysts see this as a dangerous step backward.

“In a way, this Nuclear Posture Review is the first real attempt to start undoing the Presidential Nuclear Initiative of President [George H. W.] Bush because it tries to revive and proposes new, non-strategic nuclear weapons,” Joshua Pollack, editor of The Nonproliferation Review and Senior Research Associate at the Middlebury Institute of International Studies, told me.

The Nuclear Posture Review evolved from a 1991 speech and subsequent Presidential Nuclear Initiative rolled out by Bush 41, who saw an opportunity to lead by example and de-escalate the nuclear threat, cancelling many nuclear weapons programs and urging the then crumbling Soviet Union to follow suit.

It did, and this example-setting relaxation of nuclear posture by the United States has been followed by every American President since. That is, until the Trump Administration.

“I think the [2018] Nuclear Posture Review comes down to a desire to undo some of the post-Cold War changes in U.S. nuclear posture,” said Pollack.

Or is it hot war?

The way the 2018 Nuclear Posture Review addresses Russia is even more concerning.

“Recent Russian statements […] appear to lower the threshold for Moscow’s first-use of nuclear weapons,” it reads. “Correcting this mistaken Russian perception is a strategic imperative.”

The report paints a picture of a Russia that is set on flexing its geopolitical might, including by threatening nuclear war with smaller payload warheads:

“Russia’s belief that limited nuclear first use, potentially including low-yield weapons, can provide such an advantage is based, in part, on Moscow’s perception that its great number and variety of non-strategic nuclear systems provide a coercive advantage in crises and at lower levels of conflict.”

Pollack, however, disagrees with this assessment.

“What is it they see that the rest of us are not seeing?” said Pollack. “In my experience, the nuclear crowd in and around DoD takes extremely dark views of what other nuclear-armed countries are up to.”

Pollack says that the Department of Defense views Russia as having a “theory of victory” regarding nuclear weaponry–actually thinking about deploying nukes to achieve certain goals.

“Why they think the adversary has a theory of victory when we only have a theory of deterrence is beyond me,” Pollack said.

Russian President Vladimir Putin did recently announce that the country had development a slew of new nuclear weapons, including a nuclear-powered cruise missile with indefinite range. Scary as this sounds, it doesn’t really change the nuclear threat/deterrence equation. Long ago, we acknowledged that Russian missiles can penetrate U.S. defenses. Making these new weapons is more likely a domestic policy ploy to show Putin’s strength and improve his image before the Russian elections.

Much of the academic community agrees that Russian nuclear posturing is still no more than just that: posturing. And, even if it were true, raising our nuclear arsenal still might not be the right response and could trigger a dangerous brinkmanship affair reminiscent of the Cold War.

The 2018 Nuclear Posture Review gives us an inside look at how the Trump Administration’s Department of Defense officials view the nuclear world: growing and hostile. Using North Korea, Russia, and other states as examples, the document asks for a huge upgrade to the U.S. nuclear arsenal.

This appears to be in line with President Trump’s own thinking on the matter–last summer, the President apparently asked for a return to Cold War-era numbers of nuclear warheads after being shown the downward-sloping chart of America’s nuclear armaments over the years.

The Department of Defense seems to have gotten the message and oriented its nuclear agenda accordingly. This is also in line with the White House budget proposal, where nuclear initiatives have some of the highest percent gains of any project.

Will any of the proposed nuclear reinvigoration happen, however? The question will really be answered at the other end of Pennsylvania Avenue.

“You know how kids write letters to Santa Claus?” joked Pollack. “It’s nice, but it’s your parents who are going to decide what appears under the tree. Is Congress actually going to fund any of these extras? That’s up to the appropriators.”

Watch the rest of our North Korea nuclear program reporting below: