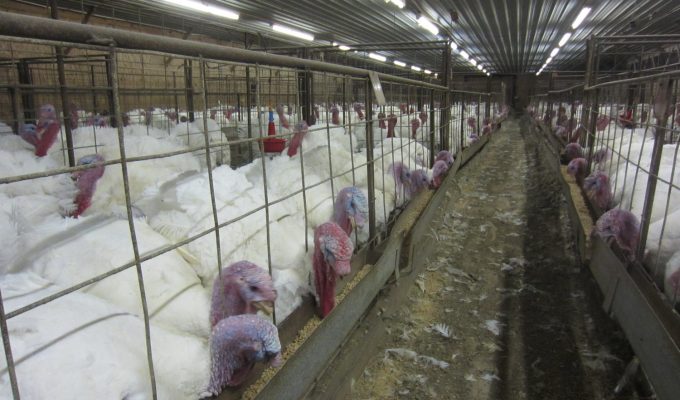 Antibiotic resistance is one of the world’s most pressing public health challenges. As we’ve discussed in a previous post, overuse of antibiotics is the main driver of this resistance.

Yet, even if we cut back the usage of antibiotics in medicine, it would only be a drop in the bucket. That’s because a staggering three quarters of all medically-important antibiotics is used to fatten up livestock.

Considering, for example, that Americans consume about 8 billion chickens a year, it is unsurprising that there is more use of antibiotics for agriculture than for human health. “We have many, many, many more animals than people,” Liz Wagstrom, chief veterinarian for the National Pork Producers Council, told Miles earlier this year. “So, on a per pound basis, we actually use less antibiotic per pound of animal than you would per pound of person.”

The industry also says that their “subtherapeutic” use of antibiotics, with doses too low to battle a full-blown bacterial infection, do serve a preventative function, stopping vulnerable, often young animals from developing infections in the first place.

Yet, still, the fact remains: the largest user of antibiotics is the agricultural industry. And that’s a problem, because overuse of antibiotics on the farm breeds antibiotic-resistant bacteria–aka superbugs–which can then make their way to people. See the devastating health effects of superbugs in Miles’s NewsHour report below.

There is a growing body of research that links antibiotic use on the farm and the spread of superbugs to people.

In several recent studies compiled by the fantastic public health, global health, and food policy author and journalist Maryn McKenna, children of hog farmers in North Carolina were almost three times as likely to get staph infections resistant to three or more classes of antibiotics compared to children with parents of different professions; poultry workers were 32 times more likely to carry gentamicin-resistant than other adults; and “patients at the Iowa City VA Medical Center were 2.76 times more likely to be carrying MRSA if they lived within a mile of a farm that held 2,500 pigs or more.”

So, why are antibiotics used in agriculture in the first place?
Animals get sick from bacteria, just like humans do, and antibiotics are used to treat farm animals. However, agricultural scientists noticed in the 1940s that adding small doses of antibiotics to healthy animals–ostensibly in the hopes of keeping them from getting bacterial infections in the first place–also caused them to grow bigger, thus making a more valuable product.

Scientists noticed this accidentally, when they fed chickens the fermented byproduct of antibiotic production in the hopes of finding “an inexpensive source of Vitamin B12 as a dietary supplement for poultry,” write R.H. Gustafson and R.E. Bowen in an academic review of the subject. “The byproduct was quickly shown to improve the weight gain of chickens.”

Fittingly, antibiotics themselves were famously discovered by accident and quickly revolutionized human medicine, so animal scientists no doubt hoped that their serendipitous discovery would prove just as miraculous. Soon, antibiotics use on the farm for what was dubbed “growth promotion” dwarfed the original, medical usage of the drugs.

Farmers saw instant improvements: “The result of the use of growth promoters is an improvement in daily growth rates between 1 and 10 per cent resulting in meat of a better quality, with less fat and increased protein content,” write Hughes and Heritage in a review.

Why or how this happens, however, is a scientific mystery.

There are no less than 8 different theories on the table right now, ranging from “stimulation of intestinal synthesis of vitamins by bacteria” to a “reduced immune stimulation” that might have nothing to do with the bacteria-killing effects of the antibiotics.

There is a clue that points to one of the hottest fields in biology at the moment: the microbiome, or the collection of bacteria that lives symbiotically on and in an animal. “Although the mechanism underpinning their action is unclear, it is believed that the antibiotics suppress sensitive populations of bacteria in the intestines,” write Hughes and Heritage.

The use of antibiotics for growth promotion might disrupt the microbiotic balance of pigs, cows, chickens, and other farm animals in such a way that more nutrients are absorbed by the animal instead of by the cohabitating bacteria.

In the lab, giving low doses of antibiotics to mice has been shown to make them obese. Interestingly, when the microbiome from the obese mice was then transplanted into normally-sized but germ-free mice, those mice also became obese. These mice put on about 10% of their body weight after the microbiome transplant, similar to the weight gain seen from the use of antibiotics for growth promotion in agriculture.

Still, even if this is the correct theory, the mechanism remains unclear. How changes in the microbiome affect the uptake of nutrients and development of mice, livestock, or humans, for that matter, remains to be discerned. These are complicated systems, likely governed by, as the amazing science journalist Ed Yong puts it, “a tangled web of causality rather than a linear chain.”

How antibiotics promote growth may be unclear, but it is clear that their use has been baked into the status quo of agricultural industry for decades. And there are multiple reasons for this practice to end.

First off, research has shown that the benefits of using antibiotics for growth promotion have been declining.

In hog farming, early (1950-1985) data shows an increase of 16.4% average daily weight gain by using antibiotics, while a current production system study from 2002 showed only a 5% gain, point out Aude Teillant and Ramanan Laxminarayan in a thorough review for Choices Magazine, an agricultural industry publication.

“The growth response to antibiotics is less important when animal nutrition, hygiene, genetics, and health are optimal,” they write. “With changes in the livestock industry over the past 30 years, all of these factors have improved.”

At some point, the cost of administering antibiotics will outweigh the benefit incurred from making marginally fatter animals–something we’ve already seen happening in the chicken industry, as reported below by our colleague Paul Solman.

Secondly, farmers can be equally as successful without using antibiotics.

Closer to home, hog farmer Russ Kremer, who Miles interviewed for the NewsHour segment below, has seen his business expand when he stopped using antibiotics for growth promotion. He says customers are willing to pay a bit more for his healthier, happier pigs.

And finally, most of the antibiotics used are completely wasted anyway: three quarters of all antibiotics given to these animals passes directly through them without being absorbed. No doubt the vast amounts of antibiotics excreted on farms is not helping the growing superbug epidemic.

And that’s really what it comes down to: superbugs. If we want to curb the evolution of antibiotic resistant bacteria, we have to stop using antibiotics for growth promotion in agriculture. We might not know exactly how they work, but we do know we should stop using them.