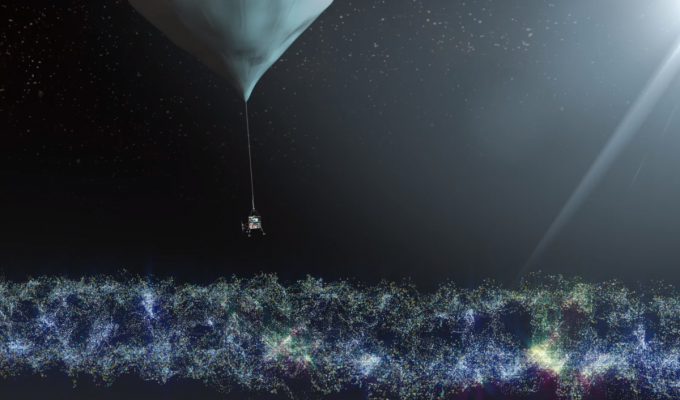 The U.S. government estimates that the consequences of climate change are already costing the country hundreds of billions of dollars. But even if we stopped using fossil fuels immediately, the globe would continue to warm due to an existing buildup of carbon dioxide. PBS NewsHour science correspondent Miles O’Brien reports on how some scientists are now exploring unorthodox means of actually removing the gas from our atmosphere.

As we heard, there’s been some debate on Capitol Hill about how to tackle climate change, but the expectation is that very little legislation is going to pass in the foreseeable future.

And yet climate change’s impact is growing around the world. The federal government’s own assessment found climate change is already costing the U.S. hundreds of billions of dollars and having a major effect in parts of the country.

Some researchers argue the problem is getting so serious that it’s time to start exploring ideas that have long been seen as far out and potentially loaded with other problems and consequences.

But these scientists say the times demand new approaches to lower the Earth’s temperature.

Miles O’Brien is back with this story.

It’s part of our Breakthroughs, reports for our regular series on the Leading Edge of science.

Engineer David Keith has run the numbers on climate change, and for him the bottom line presents a stark reality.

Even if we eliminate emissions, we simply stop the climate problem getting worse. We don’t make it any better.

The planet is already in trouble. There is too much carbon dioxide in the atmosphere, and human civilization is doing precious little about it.

As you can see, these trend lines have a lot of inertia. So even if we stopped using all fossil fuels tomorrow, there’s still so much carbon dioxide in the atmosphere that the problem will persist for decades.

We do need to drive emissions to zero, but we also need to reduce the risk from the CO2 that’s in the air.

So Keith is asking some big questions, like, what if we could suck carbon dioxide out of the air? It may sound like an impractical idea, but he has some proof of concept.

It’s a prototype plant in Canada built by Carbon Engineering, a company Keith founded. It extracts carbon dioxide out of thin air. The pure CO2 is then combined with hydrogen to synthesize fuels, gasoline diesel or aviation kerosene. Choose your grade.

That fuel didn’t come from the ground. All the carbon that you released burning it, you took from the atmosphere when you made it. So, in the net, there’s no carbon emissions. And that’s a way to help decarbonize.

So what if we don’t decarbonize and reduce greenhouse gas emissions fast enough to avoid dire consequences?

David Keith is leading research into a drastic measure to turn down the global thermostat. It’s called solar geoengineering. The idea? Inject large quantities of sulfur dioxide, or maybe another aerosol, into the stratosphere using high-altitude aircraft.

This should lower global temperatures by reflecting sunlight away from our planet. It sounds like an idea hatched by a James Bond villain, and David Keith is keenly aware of that.

Geoengineering seemed like a bit of a crazy idea. But there was a taboo. And I think taboos are unhealthy. And my view is, we should understand it better to see just how crazy it really is.

Indeed, he’s been exploring this idea since 1989, and, over the years, it’s made him a bit of a scientific pariah.

Senior colleagues would tell me this would ruin my career or people would kind of like want to move away from me in the elevator. This topic was just toxic, and the mainstream climate science community just didn’t want to talk about it.

He may not have had scientists on his side, but nature has been running solar geoengineering experiments for millions of years, in the form of volcanic eruptions.

When the really big ones blow, they launch sulfur dioxide into the stratosphere, six to 30 miles above us.

It gradually turns into aerosols. It turns into small droplets, liquid droplets of sulfuric acid, and those droplets reflect away sunlight. And that reflection of sunlight cools the climate, and we see that after big volcanic eruptions.

When Mount Pinatubo blew its top in 1991, global temperatures cooled one degree Fahrenheit over the subsequent 15 months. David Keith thinks humans can do the same.

Maybe that’s why the snicker factor is starting to fade.

We’re not going to limit the risks of climate change to even reasonably safe levels by reducing emissions from burning fossil fuels alone.

Climate scientist Peter Frumhoff is director of science and policy at the Union of Concerned Scientists.

And so, therefore, we’re looking at a whole range of hard choices about how to pull carbon dioxide potentially out of the atmosphere at scale, and maybe, just maybe, to begin to think about mimicking volcanoes by injecting reflecting particles into the stratosphere.

That’s a terrible idea, but people are beginning to give it some attention.

Yes, it’s really changing. Suddenly, many more of the kind of the environmental leadership and sort of science policy thought leadership take this seriously. It really feels very different even from a year ago.

But the devil, as always, lurks in the details. One of the big questions, could it make the climate worse in some places, better in others?

It has all kinds of unclear ramifications. We don’t know what the regional changes in rainfall patterns might look like.

That’s just one of the possible unintended consequences of solar geoengineering. Other questions: How would it affect agriculture? How would any aerosol interact with the gases already present in the stratosphere? And could there be some unwelcome byproducts?

That’s what David Keith and his colleague Frank Keutsch are trying to determine. In the lab, they are testing various aerosols to see how they might behave in the stratosphere. Sulfur dioxide may be a good reflector, but it also reacts with and reduces the ozone layer and causes acid rain.

So they are considering alternatives. The leading contender? Calcium carbonate.

These calcium carbonate particles certainly will not have the same chemistry as these concentrated sulfuric acid particles. What we don’t know is, how do they actually react? Because it could be that they react even worse.

To find out, they are planning an atmospheric experiment called SCoPEx. No launch date is set, but whenever it flies, they hope it will answer some important questions.

This is an artist rendering of the SCoPEx experiment. And next to me, it’s pretty impressive, kind of big. But, of course, relative to the size of the atmosphere, it’s minuscule. Above me is a high-altitude balloon, and right now it’s lifting SCoPEx to the upper reaches of the atmosphere.

It will rise into the stratosphere, about twice the height of where airliners fly. Once SCoPEx is here in the stratosphere, it will release a small amount of calcium carbonate. The onboard propellers mix the experiment into a plume less than a mile in length.

This is a tiny-scale thing. We’re talking about injecting less than a kilogram of aerosols. This in no way alters the climate. It’s simply a scientific experiment to improve our knowledge of how some future aerosol injection scheme might alter the climate and impact the chemistry of the stratosphere.

But just to be sure, an independent panel of scientists will review everything before launch. They will evaluate the potential risks, along with the reward.

The data, as well as the lessons learned, could be huge. Now the particles are interacting with sunlight and the atmosphere. As the experiment plays out, SCoPEx isn’t far away. When the time is right, the gondola is lowered right into the mix. Here, a suite of sensors will determine chemical composition and reflective properties of the plume.

The experiment’s done — there goes the parachute — and this valuable data is on the way home.

SCoPEx is a small-scale experiment designed to test some of the unintended consequences of a really big idea.

But perhaps the greatest unintended consequence of geoengineering might be in the realm of psychology. If we know we can do it, will we use it as an excuse not to reduce our fossil emissions?