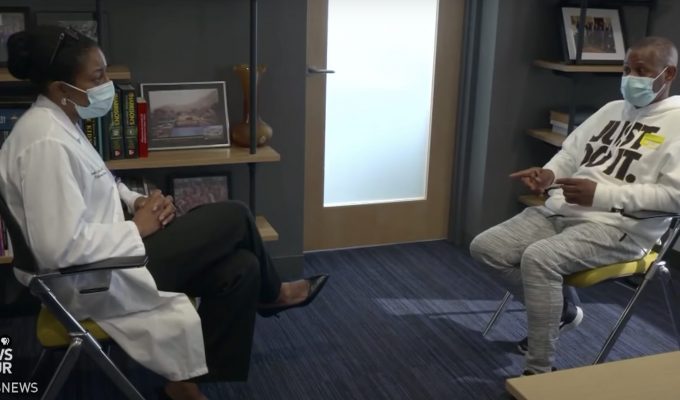 In the race to get COVID vaccines out the door, public health experts have labored over who should receive vaccinations first. But they also hope to find solutions to deep-rooted unfairness laid bare by the virus, with Black, LatinX and indigenous people more likely than white individuals to get COVID-19. But reluctance and mistrust over the vaccine is presenting barriers. Miles O’Brien reports.

The Trump administration said today that it expects to ship six million doses of that new COVID vaccine from Moderna to more than 3,200 locations next week.

But with new cases at high levels and states reporting they may not get as much of the other vaccine from Pfizer as expected next week, there are real concerns.

Miles O’Brien reports that there are questions of public trust around vaccines, especially in communities of color.

It’s part of our series on the Leading Edge of science.

In the frantic race to get COVID vaccines out the door, public health experts have labored long and hard to figure out who should go first and who can wait.

They also hope to inject an antidote to deep-rooted unfairness laid bare by the virus.

Bisola Ojikutu is an infectious disease physician at Boston’s Brigham and Women’s Hospital.

Black, Latinx, and indigenous populations are about three times more likely than white individuals to be diagnosed with COVID-19.

They are about five times more likely to be hospitalized and almost twice as likely to die of COVID-19.

The numbers, are devastating, OK? And I think that a lot of people initially were shocked, though those of us who’ve been working in the area of disparities for a long time weren’t shocked.

There is no evidence biology or genetics are reasons for this. Rather, it is a symptom of chronic racism and poverty.

Victor Dzau is president of the National Academy of Medicine.

It’s where you live, what you do, how you’re exposed that increases your chance, and then with the comorbidities, which we all know is rooted in health inequity, which are mainly related to issues of access, racism, and others, that increases the chance of people getting the transmission infection.

Dr. Dzau helped create a diverse committee of public health and infectious disease experts to offer a framework to the states as the vaccinations begin. The committee did not use race as a factor in its deliberations.

Instead, it used the Centers for Disease Control and Prevention’s Social Vulnerability Index, which measures how external factors adversely affect human health.

The committee is giving priority to high-risk health workers, first responders, teachers, prisoners, and correctional staff, and people who hold critical jobs. Dzau says it is a colorblind way to address racial disparities.

You look at who’s being mainly affected, they are, in fact, communities of color, minorities and others who are basically socioeconomically disadvantaged.

I think it’s an objective way of looking at it, rather than just labeling people just because of skin color.

And getting enough people vaccinated to slow the exponential spread of the coronavirus will not be easy. In the U.S., vaccine hesitancy has been a persistent problem for many years.

Mandating vaccines for education, that is coercion.

And the rapid and seemingly politicized development of COVID-19 vaccines has deepened those suspicions. Only 61 percent of Americans say they will take the vaccine. Among minority communities most affected by COVID, the number is even smaller. Only 24 percent of Black Americans and 34 percent of Hispanics say they will get a shot.

The question is, who is going to be willing to participate?

Reuben Warren is director of the Tuskegee University National Center for Bioethics in Research and Health Care.

And it’s the question of not the level of science, but the trustworthiness of the scientists, as I have been taught and I believe that science doesn’t lie, but scientists do.

From 1932 through 1972, the United States Public Health Service and the CDC conducted a study based here on syphilis among 600 African Americans, most of them poor sharecroppers.

Despite the fact that researchers discovered penicillin is a cure in 1947, none of the men were treated. It’s the most infamous example in a long history of shameful mistreatment of Black Americans by scientists conducting medical experiments.

We know the history, but history doesn’t have to repeat itself. It’s not inevitable. And I think the notion of inevitability is a false notion. We have the opportunity to change how things are, if there’s a commitment to do so.

In Boston, Bisola Ojikutu is doing her part.

In fact, it would be strange if there wasn’t, you know, that level of mistrust, because if you see institutions where this is occurring, if you see health care providers and the government that’s not addressing this issue, you know, that seemingly allowing it to exist, it’s tolerated, why would you trust?

So, she recruited minority volunteers for the Moderna vaccine trial, people like Anthony Shivers, here for a follow-up after receiving his shots.

So, tell me how you’re feeling. You have been in the trial for a while.

He is in a high-risk category, with some underlying health issues. But he too is concerned people in his community will remain hesitant.

I felt compelled to come and be a part of this, because, like I said, I was watching the news one night, and it just really struck me how it’s really hitting us seniors and the Black community. You got to come together, and you got to join in and be a part of a solution, not just sit back and be a bystander.

Public health experts say at least 70 percent of the population will need to be vaccinated to achieve herd immunity, stopping the pandemic.

So, the first jabs are crucial in more ways than one. Some polls suggest growing numbers are willing to be vaccinated. The success may be contagious.