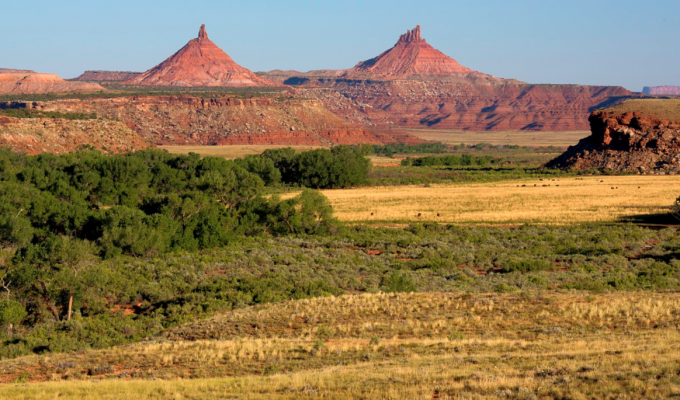 Only a year ago Bears Ears was designated a National Monument by outgoing President Obama “to protect some of our country’s most important cultural treasures, including abundant rock art, archeological sites, and lands considered sacred by Native American tribes.”

Paleontologist Robert Gay has been hunting fossils in the area for over a dozen years. While the administration left some fossil-rich lands protected, Gay says the area is just beginning to be explored. In a blog entry, he says that without the “explicit recognition of the paleontological value of the lands… paleontologists would have a difficult time continuing ongoing research and obtaining new permits to work within the region.”

“One of our most important sites, the largest Triassic bone bed in the state of Utah, no longer has monument protections,” Gay writes in an email. He is describing the White Canyon area, site of the only phytosaur Pravasuchus fossil ever found in Utah. Pravasuchus were 20-foot crocodile-like creatures with blowholes that appeared slightly before dinosaurs. They have an important cultural connection as well: “The Navajo have stories of phytosaur teeth being useful for curing toothaches,” writes Gay. “Mark Maryboy, a Navajo elder from Utah, told me a story one time too about how dinosaurs and their footprints are considered sacred because they represent the remains of the Monsters killed by the Hero Twins in the Third World of the Navajo origin story.”

To paleontologists, this unique site of prehistoric animals is helping document the rise of the dinosaurs. Gay also writes, “The other animals in the site appear to be new to science.”

Nationally protected land has been reduced by approximately 1,150,860 acres in the Bears Ears Monument. President Trump says in 60 days the newly excluded land will be open to oil-drilling and mining, crowding out scientists.

“Without the monument, the National Conservation Lands science support grant funding is not available,” Gay writes. “So not only is the site losing protections, we’re actually losing the funding that allows us to excavate these fossils and keep them safe in museums too.”

Will joined Miles O'Brien Productions in 2013 as our go-to producer after his stellar work on the Emmy Award Winning “Manhunt: Boston Bombers.” A graduate of Emerson College and father of two, Will enjoys spending free time discovering the best eateries in New England with his family.