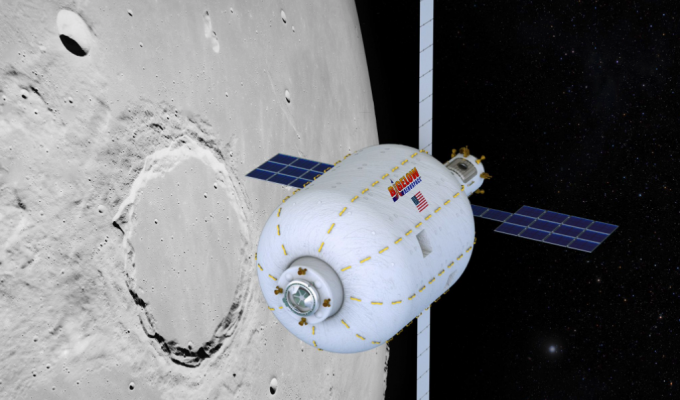 Perhaps better known for his real estate empire across the American Southwest and a penchant for ufology, Bigelow has been a player in the commercial space industry since 1999, when he founded his eponymous aerospace company outside Las Vegas.

From the beginning, the company has put all its chips in the expandable space habitat basket. In 2006, Bigelow Aerospace successfully launched Genesis I, a small craft that inflated upon reaching space, aboard a converted Russian ICBM. The next year, they doubled their space presence with a nearly identical Genesis II launch.

In 2016, SpaceX delivered the Bigelow Expandable Activity Module (BEAM) to the ISS, another successful operation.

Building upon these successes, the next step for Bigelow’s space endeavors will be getting the large, self-contained B330 spacecraft up and running. Designed by Bigelow Aerospace, the habitat expands when in space to a volume one-third of the whole ISS, and can fly solo, in groupings, or attached to the ISS.

Bigelow Aerospace will continue to focus on design and production, while Bigelow Space Operations will organize marketing, sales, and management of the B330 system. “It’s all in this context of commercialization of Low Earth Orbit in terms of human use,” said Robert Bigelow on a media conference call earlier today.

Bigelow cites an urgent need for action considering President Trump’s recent budget proposal calls for defunding the ISS by 2025. With no concrete replacement or alternative space strategy in place, Bigelow worries that this leaves a gap that America’s space competitors will exploit.

“China is actively soliciting a number of partners of the ISS today, and they are succeeding,” Bigelow said. “They’re offering a number of attractive terms and conditions and features that the commercial sector is going to have a horrible time trying to compete with.”

“NASA itself is a competitor,” Bigelow also said. NASA is trying to organize the next step of its program, likely a deep space station near the Moon, and partner countries may not have the resources to do both–they will have to choose between Low Earth Orbit with Bigelow or other commercial ventures and NASA’s deep space push.

In the hopes of phasing in more commercial ventures onto the station, Bigelow Space Operations has partnered with the Center for the Advancement of Science in Space (CASIS), the manager of the ISS. This is an important first step if B330s are to ever dock on the ISS.

The first order of business for Bigelow Space Operations is staffing and performing a multi-million dollar comprehensive evaluation of the commercial spaceflight industry.

As commercial ventures blast onto the scene, are governments willing to pay for launches? Is there interest in buying time on commercial space stations? These are the types of questions Bigelow wants hard answers to, and to understand “what the hell does a commercial market really look like on a global basis, once and for all.”