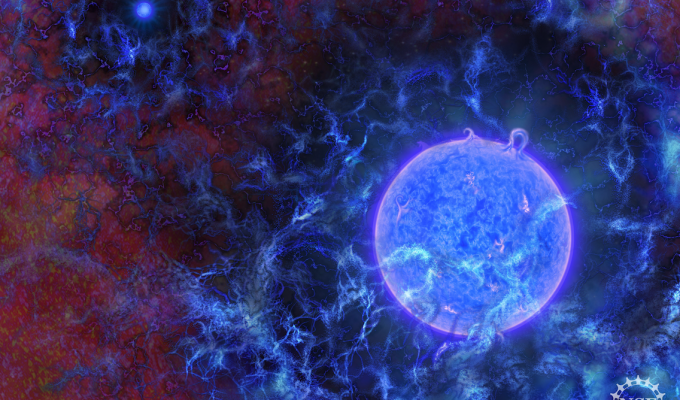 Some of the most ancient light has been detected, giving the stars their birthdate, helping characterize dark matter, and opening up a new field of astronomy.

The oldest light we can see is the cosmic microwave background, the remnant hiss of the universe’s massive expansion following the Big Bang. After that, the universe had expanded and cooled enough to make atoms, mostly hydrogen.

No large scale structures like stars formed for millions of years, so there was nothing giving off light–cosmologists, who rely on ancient light of all sorts to do their work, call this the Dark Ages.

Little is known about this time. Even when it ended with the formation of the first stars, the Cosmic Dawn, remained a blurry mystery until today.

In a paper published in the journal Nature today, Judd Bowman et al. report finding an elusive fingerprint of the first stars.

When the first stars were born, the ultraviolet light that poured out into the universe was sometimes absorbed by the surrounding hydrogen gas. In theory, astrophysicists should be able to track this interaction and see a dip in light intensity at a known frequency. In practice, however, the universe is expanding so old light signals are stretched and cooled.

If the exact date of Cosmic Dawn was known, it would be a simple matter of correcting for the stretch and picking out the blip–without knowing the time when the first stars were born, the search for this tiny perturbation becomes a daunting needle-in-a-haystack task.

Bowman and colleagues were undeterred, however. They built a small radio telescope in the Australian desert, and swept through likely frequencies to which the signal could have cooled.

More than a year ago, they found a blip at 78 megahertz that seemed to fit, but Bowman and his colleagues was exceedingly careful. “We performed numerous hardware and processing tests to validate the detection,” the team writes modestly–they fiddled with all the parameters, reoriented the antenna, and performed various extra tests for more than a year.

In the end, the results–at least in this one experiment–stand up to scientific scrutiny. Knowing the dip occurs at 78 megahertz allows Bowman and his team to reverse engineer the expansion of the universe and give a confident estimate of when the first stars were born: 180 million years after the Big Bang.

Like any great science experiment, this one answers some fundamental questions about the universe we live in while opening the doors to many others.

For example, the team was surprised to find that the absorption signal was twice as strong as models predicted. This means that the hydrogen gas pervading the early universe was much colder than previously thought, so it could absorb more of the ultraviolet radiation from the early stars.

Why is it so much colder? Another astrophysicist, Rennan Barkana, thinks this is due to its interaction with dark matter, the mysterious 85% of all matter that only interacts with the rest of the universe via gravity.

In an accompanying paper also published in Nature, Barkana contends that interactions between dark matter and protons and neutrons (collectively called baryons) were likely the strongest during this early cold time.

“Specifically, at cosmic dawn, the cosmic gas is at its coldest: it was hotter before owing to its remnant thermal energy from the Big Bang and afterwards owing to X-rays and other heating radiation from astrophysical objects,” writes Barkana. “Therefore, if baryon–dark matter scattering is strongest at low relative velocities, then its effect might be evident only at cosmic dawn.”

Interaction with dark matter would make the hydrogen gas even colder, because it is giving up energy to the dark matter. This could explain the stronger absorption signal Bowman et al. detected.

Barkana’s analysis of how the signal would be impacted by dark matter-hydrogen gas interaction provides insight into the very essence of what dark matter could be.

“Our analysis indicates […] that the dark-matter particle is no heavier than several proton masses, well below the commonly predicted mass of weakly interacting massive particles.”

Weakly interacting massive particles, or WIMPs, are the leading contender for explaining the structure of dark matter, so this finding might turn the whole field on its head.

That is, if the original finding is verified. Other, similar experiments are already underway, hopeful to tease out the 78 megahertz dip using other instruments.

If they do, another powerful tool will be added to the cosmologist’s toolbox, as big a deal as the birth of multi-messenger astronomy last year.