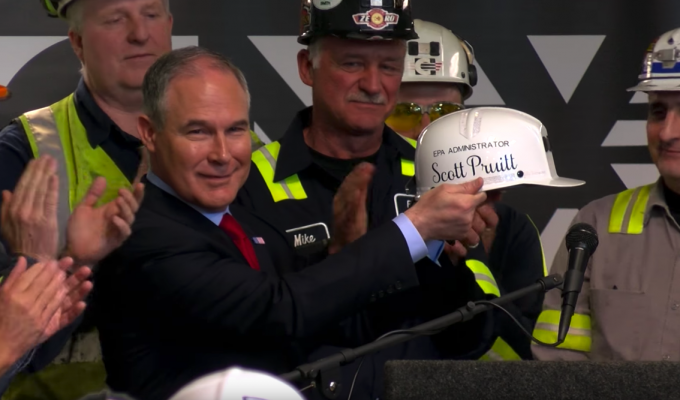 When environmental chemist Deborah Swackhamer testified in a House science subcommittee hearing about “Expanding the Role of States in EPA Rulemaking”, neither the environment nor the chemistry were in a state of equilibrium.

Swackhamer is a Professor Emerita at the University of Minnesota and the veteran chairperson of the EPA’s Board of Scientific Counselors (or BOSC), an 18 person committee of, well, scientists–mostly academics, but there’s a few industry and NGO voices as well.

They provide the EPA with expert advice to EPA staff scientists. You might be surprised to learn there are only 1,500 of them. The EPA relies heavily on outside scientific advice. The staff scientists are there to fill the gaps. According to Swackhamer, “they do absolutely platinum standard research on toxicology of chemicals.”

The BOSC is there to help EPA staff scientists prioritize their work providing input on programs such as the Roadmap for Global Climate Change.  Two weeks before her testimony, the EPA chose not to renew the contracts of half of her 18-member board.

An EPA spokesperson, says the dismissed board members are still welcome to reapply, and the agency Administrator Scott Pruitt later commented on the non-renewals on conservative broadcaster Hugh Hewitt’s show: “You want to ensure as you’re dealing with rulemaking–air, water, whatever rulemaking we’re doing, that the geographical uniqueness of our country as we’re patching rules is taken in consideration. And so you need scientists, you need individuals that have expertise and knowledge in those areas.”

Swackhamer says she doesn’t quite understand why her advisory committee is being targeted: “We’re not reviewing regulations, we don’t discuss regulations,” she said. “We only discuss the research.”

The suggestions that the BOSC provides are just that–suggestions. They are nonbinding. However, for every report the Board submits, the EPA is required to formally respond and explain why they are or are not taking this or that suggestion. This is a transparent process which is all in the public record.

While at first, this might seem like a routine reshuffling in the midst of a change of administrations, it is anything but that.

In fact, it is an unprecedented purge of scientists from academia.

Swackhamer was shocked when she heard the news. She says: “It is extremely unusual to not just renew people that are contributing adequately to the board.”

There are 21 other science review boards in the EPA that could be under review–just like the over 200 advisory boards of the Department of the Interior that are currently being reconsidered.

Many scientists, and those who care deeply about the integrity of science, are worried that this sort of action paves the way for industry to put its thumb on the scale as the federal government considers various environmental regulations.

“It is a way of stifling the participation of scientists by drowning out the voice of science with unscientific corporate industrial assertions,” Rush Holt, CEO of the American Association for the Advancement of Science, told me earlier this year before testifying on this matter to Congress. He echoed that sentiment at the hearing.

I spoke with former assistant administrator of the EPA during the George W. Bush years, Jeff Holmstead who now represents the fossil fuel industry at the giant Bracewell law firm. He testified in that same meeting with Rush Holt. Beforehand, he told me that “as long as they’re disclosed, the fact that someone has done some consulting work for industry shouldn’t disqualify them from offering their scientific views on things.”

In principle, Swackhamer agrees. “I don’t think it would hurt the process at all to have industry scientist engaged in these discussions,” she said. “The difficulty is finding ones that don’t have a conflict of interest.”

So what does this shakeup mean for this board and for the EPA going forward?

Swackhamer is uncertain about the future of the Board of Scientific Counselors. “We don’t actually know how those nine positions will be filled or when they will be filled,” she said. “At some point, we will not have a critical mass of scientists to make good advice.”

Keeping a critical mass of academic scientists on the BOSC will be even more difficult now, as two other members have resigned in the wake of the purge. “We cannot in good conscience be complicit in our co-chairs’ removal, or in the watering down of credible science,” wrote Drs. Carlos Martin and Peter Meyer in their resignation letter.

Under Scott Pruitt, the Trump EPA is clearly forging a path to give industry a much greater voice in regulating itself. Pruitt claims it’s possible to grow jobs and protect the environment.

At a recent speech at the largest underground coal mine in America, he accused the  “environmental left” of jumping to the conclusion “that we’re somehow compromising outcomes with respect to the environment.”

Despite the rhetoric, all signs indicate the Trump Administration is not genuinely serious about  protecting the environment in general and, more specifically, addressing perhaps the most urgent challenge we face: climate change.

At the end of April, the EPA’s website on climate change was taken down. It’s being updated to “reflect EPA’s priorities under the leadership of President Trump and Administrator Pruitt.”

Considering that both have been known to dispute the impact of people on the changing climate or, in fact, that the climate is changing at all, it’s probable that the EPA priorities mentioned will not promote programs focused on studying and mitigating climate change.

Although the climate change website is down, thankfully the climate research data remains safe. Much of the data is hosted on other sites, like Data.gov. However, it’s still frightening for some scientists, like NYU’s Dr. Jerome Whitington. There is some concern about preservation, but the larger problem is accessibility.

Whitington is part of the Data Refuge Project, a national effort to archive government research data they think might be at risk of disappearing. They have teamed with research libraries and archivists around the country work on the data accessibility problem. So far an estimated 6,500 people have participated in Data Refuge events. Whitington expressed the value of accessing data: “All of our environmental policy rests on evidence.  So, without the evidence, it disappears pretty rapidly.”

When I spoke with Deborah Swackhamer, she touched on the broader implications of these moves by the EPA: “It almost feels like this is the first of a wave of potential actions that are going to further marginalize science advice,” she told me. “It makes me concerned, and if it’s true, very sad.”

The Administration might say that letting science advisory board memberships lapse and updating climate change websites to reflect current priorities are all normal and nothing to worry about.

But environmental advocates maintain that this action puts government science agencies on a dangerous path.

What happens next is as the murky (sometimes even flammable) rivers that were common before Richard Nixon created the Environmental Protection Agency in 1970. Perhaps the rallying cry for those of us who care deeply about protecting our environment and tackling climate change should be: “Remember the Cuyahoga!”