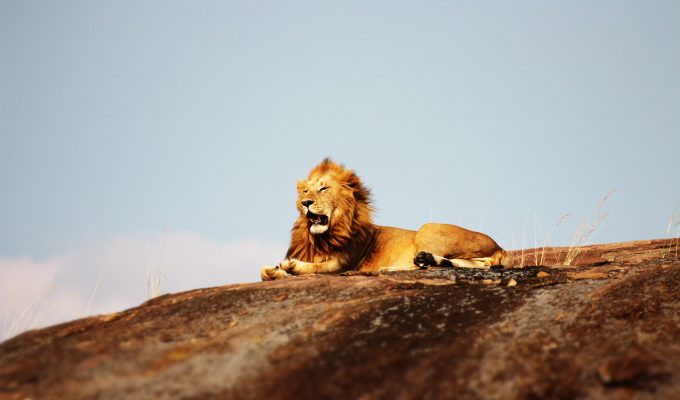 Catching and tagging wildlife is hard enough. But Chris Wilmers, an associate professor at UC Santa Cruz, whose lab studies wildlife ecology and global change, studies big carnivores, and he and his team want to know more than just where they are. He wants to know what it costs them to stay alive.

“Moving around is the most important metabolic cost in an animal. If it costs you a lot, it’s not going to get you very far in terms of distance or survival or reproduction,” he says. “From GPS collars we knew where they were. But we didn’t know what their behavior was, or how many calories they were burning, what it cost them to move around the landscape.”

But measuring the calorie output of some of the world’s most powerful predators is a hard job.

“We used to have to catch an animal, and inject them with water containing a heavy isotope. Then we’d catch the animal a week later, draw blood, and see what the ratio of that isotope was in their blood. That would tell you roughly how many calories the animal had burned in that week.”

“But that’s pretty intense,” he sighs. “Number one, it’s almost impossible to catch these guys. And to do it twice in a week—that’s really hard. And the data is really coarse. And it’s hard on the animal.”

And so in 2007, Wilmers and his colleagues began investigating the use of accelerometers — the tiny motion-measuring systems that now come standard inside any smartphone — in tracking the minute-by-minute movements of an animal. Not just where they went, but how much they moved their bodies.

“You can measure the metabolic cost of every minute of their day,” Wilmers says. “And you can begin to tie together all sorts of things.”

At first, the technology just didn’t work very well. The data would get corrupted, the collars would disintegrate, maybe the battery would fail. But now, after nearly a decade of refinements, Wilmers and his team are getting groundbreaking information about big carnivores.

They’ve put collars on wolves in Alaska and Wyoming, mountain lions in California, and leopards, lions — even hyenas — in Kenya.

“Lions are pretty easy,” Wilmers says. “In places where they’re not persecuted, you can just drive up to them and shoot a dart in their butt.”

“But to get leopards, you have to go through all the hyenas. You have to bait the site with prey, and the animal comes along, steps in the trap, and it grabs their foot. Then the first thing that shows up are hyenas — they have this amazing ability to find meat. So you have to tag a couple of them before they get the idea to go away. And then you can do the leopard.”

“So the hyenas were kind of an accident. We were just going for leopards, but then we realized we had a couple extra collars, we had the time, so we went for it with the hyenas.”

Mountain lions have offered the team their most comprehensive data sets so far. In a 2014 paper in the journal Science, Wilmers and his co-authors revealed that mountain lions not only save as much as 2.3 times more energy by sitting and waiting for prey to pass beneath them as compared to mammals that actively pursue prey, but they’re also able to perfectly calibrate their pouncing force (dropping as much as 16Gs of acceleration on their victims) to spend as little energy as possible during the attack.

Now the team is combining the insights from these collars with a second technology: motion-detecting cameras triggered by passing mountain lions. “We’re fitting the cameras with audio, and setting them up where we know lions will come and eat a kill. We’ve compared a control sound — frogs — to the sound of humans talking. It turns out that they totally ignore the frogs. But when they hear the talking? They turn around and jet.”

The findings suggest that not only are mountain lions and their hunting behaviors deeply disturbed by the sound of humans, but so far the data shows that mountain lions — forced to abandon their kills over and over — have to become more destructive in order to survive. “That means that mountain lions that have people around kill as many as 50% more deer per year than lions that live in pristine areas,” Wilmers says.

This research – which depends on human technology to measure something otherwise almost impossible to see – seems to suggest that human civilization is otherwise deeply destructive to the habitats and habits of big carnivores. The question is whether that technology can help convince us to better protect those animals.

Photo by Mike Holford on Unsplash