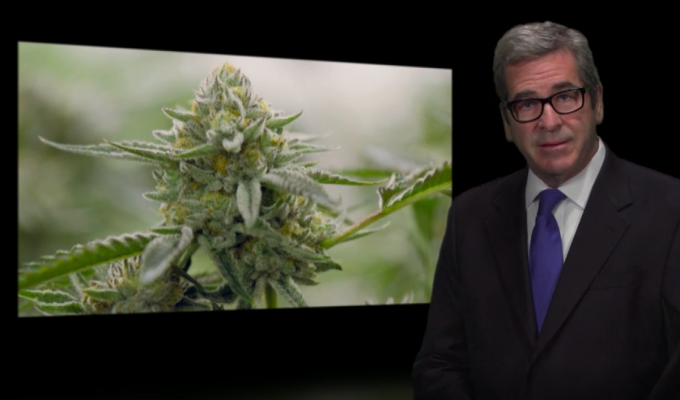 As national attitudes and laws around cannabis use have evolved, so have the commercially grown strains of the plant. Some marijuana varieties today contain levels of THC, the drug’s psychoactive compound, as high as 50 percent, compared to around 5 percent a generation ago. But as PBS NewsHour science correspondent Miles O’Brien reports, the effects of cannabis on the human brain are still relatively unknown.

All this week, we’re looking at the impact of the wave of marijuana legalization.

One of the key questions is whether marijuana is generally more potent now and whether that poses an increased health risk for some people. It’s also coming amid debates surrounding the larger benefits and risks of marijuana.

For our Leading Edge segment, Miles O’Brien sifts through the science around what’s known and not known about these claims.

It’s part of a close look at The Green Rush around the country.

For connoisseurs of cannabis, these are heady times indeed.

It’s pretty much like Toys ‘R’ Us for adults now.

We caught up with Levon at a jammed dispensary in Leicester, Massachusetts. He had just bought some cannabis oil and a pre-rolled joint.

No one really gets in trouble with this. So, it’s nice not being hassled and things like that just for smoking weed.

The state is among 11 and the District of Columbia that have legalized recreational use of marijuana for those 21 and older.

Can’t complain there one bit. Looking forward to enjoying this when I get home.

Massachusetts is among 47 states that have sanctioned cannabis for medical purposes as well.

It’s a stark contrast from the days of reefer madness, the war on drugs and the vilification of a plant that humans have used for more than 2500 years, precious little of it informed by research.

What an insult it will be to what we are and whence we came if we do not rise up together in defiance against this cancer of drugs.

It was much more motivated by sociopolitical pressures, if you will, not a ton of real scientific data. A lot of assumptions were made.

Neuroscientist Staci Gruber is an associate professor of psychiatry at Harvard Medical School and director of the Marijuana Investigations for Neuroscientific Discovery Program at McLean Hospital. She has been studying how cannabis affects the human brain for more than two decades.

We’re still playing catchup in terms of trying to understand what we really need to understand about cannabis and cannabinoids and how they work.

She’s doing her best to fill the gaps of understanding by imaging the brains of teens and emerging adults, some heavy cannabis users who started very young, and others who are weed-free.

When they conduct cognitive tests, their brains look very different. They use different regions to get the job done.

These patterns of activations suggest there is really something different in the way they’re processing the information.

The data suggests that heavy recreational use of cannabis during adolescence and emerging adulthood inhibits the development of the prefrontal cortex, the decision-making center of the brain.

And Gruber also reports evidence of changes in the white matter, which connects various regions of the brain. The white matter in pot users is less organized and coherent. These individuals also self-report more impulsive behavior.

We know some things, for sure. We know that there are likely negative effects if cannabis becomes a regular part of one’s routine when we’re neurodevelopmentally vulnerable. That is, we’re just still growing up, we’re under construction, or half-baked, better way to put it.

And the pot is much stronger than it was a generation ago, when it contained, on average, about 5 percent THC, the psychoactive main ingredient in marijuana.

Today, the plants themselves have been bred to be much more potent, 12 percent THC on average. Strains over 20 percent are widely available.

But that is still not enough for Dario and his friends. They frequently use highly concentrated cannabis products known as shatter, oil and wax with average THC levels of more than 50 percent, up to 80 percent and even higher.

They prefer the concentrates in part because they get more buzz for their buck.

The high is a little different, I would say. And you definitely get, like, higher off of the oil, which is enjoyable, for sure.

But what are the consequences of this high-test high? The data is scant.

Do they simply use less of a more potent product to get the same effect? And some studies have actually reported that, and some others have reported not so much. So, I think that’s a type of investigation I would very much like to see done.

Important, but right now impossible. Despite the trend toward legalization by the states, marijuana is still classified by the federal government as a Schedule 1 drug, meaning it supposedly has no currently accepted medical use and a high potential for abuse.

This makes it very difficult for researchers to do their work legally. Cannabis used in scientific studies must be acquired from a government-sanctioned grow site at the University of Mississippi. And it only produces flower, not the high-concentrate products.

There is an urgent need to do this science.

Dost Ongur is chief of the Psychotic Disorders Division at McLean Hospital.

They’re seeking clues by studying the way our nervous system interacts with cannabis. The internal wiring that regulates our perceptions and thoughts is not continuous. The nerve ends are called neurons, the gaps synapses.

So, when somebody smokes cannabis, you are actually introducing chemicals that can hijack that system that’s controlling brain chemistry.

It appears that, during some critical period in brain development, cannabis has this effect on the brain that actually disrupts normal functioning and predisposes people to a psychotic disorder, whereas, in your 30s, it doesn’t have the same effect.

In all of this research, it’s difficult, if not impossible, to tease apart cause and effect. Does cannabis trigger these disorders, or do people with these problems gravitate toward the drug?

And, really important, we have seen some very striking decreases in the use of conventional medications.

Benefits, as opposed to the detriments she has documented in young people using pot heavily to just get high.

In 2004, while serving in the Army in Iraq, he got in an accident that left him with an excruciating back injury and a long list of prescription painkillers.

Over a 10-year period, I had taken 57 different medications, nine different opioids. I believe, in 2009, I was just getting on to fentanyl. I did six years on fentanyl, oxycodone for my chronic pain and then breakthrough pain.

It was a struggle, but he finally weaned himself off of opioids, and now relies mostly on medical marijuana, which, unlike those prescription painkillers, has never caused an overdose death.

But government studies show 9 percent of those who use marijuana will become dependent on the drug, much better than alcohol, at about 23 percent, or cocaine, 21 percent. But it is not risk-free.

Steve Mandile is well aware of all of this, but remains convinced cannabis has made nearly every aspect of his life better.

Every person suffering deserves a choice. And let’s stop looking at this as the initial idea back in the ’30s, where this is something that’s terrible, it’s going to ruin the world. Let’s get past all the stigma. Let’s focus on the facts.

Once vilified, but now moving into the mainstream, cannabis is neither totally bad, nor completely benign. It turns out weed is as much about shades of gray as it is green.