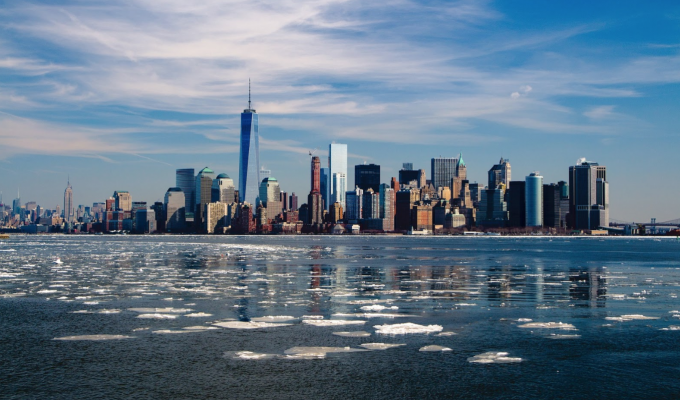 It’s been five years since Superstorm Sandy rocked the Eastern seaboard and the recovery efforts continue in earnest to this day.

Superstorm Sandy also kicked the field of climatology into high gear, as people debated whether human-caused climate change was to blame for this storm. In the few years that have followed, the science has progressed to the point that it can confidently be said that Sandy–and more recently Hurricanes Harvey, Irma, and Maria–were made more intense by human-caused climate change.

This scientific consensus was taken to heart by New York City Mayor Bill de Blasio, who inherited the Sandy recovery effort from his predecessor, Michael Bloomberg. We sat down with de Blasio to discuss his thoughts regarding the recovery and preparing for future climate change impacts.

“Let’s face it, Sandy was the ultimate wake up call for New York City and it’s the worst natural disaster in our history, and we’re still feeling the effects,” de Blasio said. “We have to change the way we did things.”

And change they have. Twenty billion dollars–roughly the GDP of Iceland–has been set aside for a comprehensive resiliency plan for the city of New York. Houses are being rebuilt, roads raised, entire neighborhoods are being put on stilts, and better seawalls are being constructed as coastal cities around the world brace for several feet of likely sea level rise and increasingly more devastating weather events in this century.

“We as a city believe it’s our responsibility to address climate change in our jurisdiction,” de Blasio said.

Local initiatives are especially important considering that the current federal administration is decidedly turning its back on the issue of climate change. Though in disarray and with no legislative victories under its belt, the Trump Administration has been incredibly tenacious in reversing Obama-era environmental regulations.

“No one has the illusion the national government’s going to address this anytime soon,” de Blasio said, but “a regional approach is not out of the question.”

Preparing for hurricanes and storm surges may be the climate change consequence of note for coastal cities such as New York, but this isn’t the case for regions around the country. Climate change affects different areas in different ways.

The Midwest, for example, is seeing a warmer climate produce more tornadoes per year. In the Rockies, the snow is now starting to melt two or three weeks earlier in the season, putting a strain on the water supply in the summer. A climate change-associated drought in California turned the countryside into the perfect fuel for a devastating conflagration.

The climate change consequences for different cities are as unique as the resiliency initiatives that will be needed to deal with them. Without guidance from the federal level, state and local governments will have to step up address climate change’s effects.

To this end, de Blasio has launched a program that aims to keep New York City on track to meet the goals outlined in the Paris Climate Agreement. The program has specific initiatives like updating building and transportation infrastructure to make it more energy efficient.

It’s the first comprehensive plan of its kind submitted by a city, demonstrating a path forward for a pro-Paris coalition of states and cities. There are efforts, such as 100 Resilient Cities (of which New York City is a part), to get more cities thinking about adapting to climate change.

“There are certainly parts of the country that are really stepping out on some of these issues,” said Stephen Flynn, director of the Global Resilience Institute at Northeastern University. “Whether we see it in Miami Beach, in Boston, or in New York, there’s real efforts here to get out in front of some of these risks. What we don’t really have, though, is a means to sort of support the cross-pollination of lessons learned. A lot of the expertises are being developed locally. And what we really need to do is scale this. We really have to make sure that this isn’t just pockets of resilience.”

De Blasio says he was inspired by strong environmental programs out West, which hopefully opens up the door to more collaboration. “We all have tremendous respect for the leadership shown by California,” de Blasio said. “That’s a huge part of this country that has taken matters into its own hands to address the emissions issue and put real teeth into the enforcement.”

California has a robust cap-and-trade program it coordinates with Quebec, which puts a price on greenhouse gasses and regulates how much pollution businesses can produce. Every year, the total amount of allowed pollution is decreased and allowances go up in price.

Just in August, for example, the auction for pollution allowances netted California over a billion dollars–money that is being used to fund transportation, green energy, and resource conservation initiatives.

Imagine the impact of such a program if it were implemented nationwide. We could be incentivizing less pollution and sending money to local communities to build their unique resiliency measures–a one-two punch.

But we are running out of time to enact change if we keep waiting for federal policies in this climate of denial.

Rolling over or retreating in the face of climate change is not an option for New York City, de Blasio said. “We have to stand and fight. We have to understand that the land we live on now needs to be saved. It’s our responsibility.”