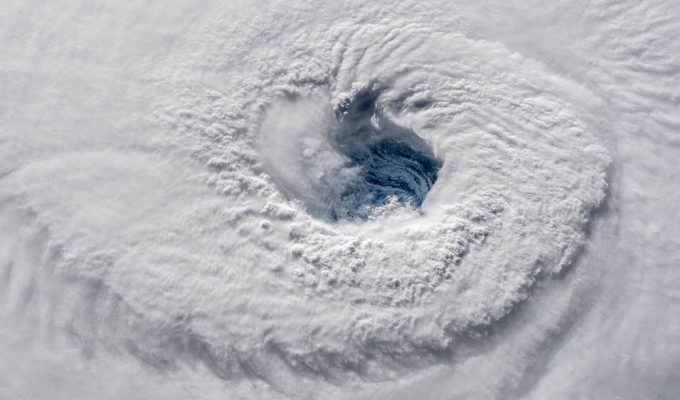 How do meteorologists and scientists make predictions about the power and trajectory of a hurricane? Buckle up. PBS NewsHour science correspondent Miles O’Brien joins a crew of scientists who fly right into the eye of Hurricane Florence.

Naturally, we and most news organizations are spending a lot of time this week trying to alert people about the power and trajectory of Hurricane Florence.

But how is it that meteorologists and scientists are able to make these projections?

That is the focus of tonight’s report from Miles O’Brien. He joined a crew of scientists that flew right into the eye of the hurricane just as it was starting to develop into a major storm a few days ago.

Buckle up for this week’s story on the Leading Edge of science and technology.

Another beautiful morning in Hamilton, Bermuda. The crew of a WP-3D Orion inspects, preps and briefs for an eight-hour mission straight into the worst weather nature has to offer.

They are hurricane hunters, and on this day, Florence is there quarry. The aircraft brims with three powerful radar systems, sensors to analyze clouds, and tubes for dropping probes.

The National Oceanic and Atmospheric Administration offered me a seat on this airborne science laboratory, so long as I could buckle my belt and harness in a hurry, no small feat for your humble one-armed correspondent.

And, soon, the craft they call Kermit was airborne, heading 800 miles to the southeast and the developing eye of the storm, then on the cusp of hurricane status.

Essentially, mission is from Bermuda down to Tropical Storm Florence. You can see on this map these are our initial suite of points.

The plane is filled with scientists, engineers and technicians. Much of what they do depends on how well things go here.

We call this station five. This is where we deploy all of our expendables from.

Aerospace engineer Nick Underwood is releasing dropsondes, tubes filled with sensors that fall to the sea under parachutes, with precise timing dictated by the scientific objectives.

The more accurate data, the more up-to-date, the more precise data they have, the better that those models are going to be.

So, with this aircraft being able to fly right through the storm, getting into the storm environment, actually sampling the atmosphere, not just looking at it from afar, that — you can’t get that quality of data anywhere else.

Much of the data that gather is beamed back in real time to forecasters at the National Hurricane Center in Miami, people like flight recon coordinator Warren Madden.

When we met him, a few weeks before my flight into Florence, he was monitoring the same aircraft as it flew into Hurricane Lane as it bore down on Hawaii.

What you’re looking at right now, we have a variety of screens up, so we can keep track of the whole situation.

He flew hurricane hunter missions himself for 14 years.

The aircraft is flying and sending us information through a satellite connection. And so we can track where the aircraft is. We can bring up various plots about wind speeds from instruments that we drop out the bottom of the plane, the float down to the surface that can measure the wind speed and the pressure and the air temperature floating down.

All that data is entered into complex computer models that try to predict the path of the storm and its intensity, the blind spot in the forecasts.

Forecasting hurricane intensity has been a big challenge for many years.

Michael Brennan is a senior hurricane specialist at the National Hurricane Center.

One of the big investments that the U.S. has made is through the Hurricane Forecast Improvement Project, where Congress provided a big infusion of money to focus research and computer modeling development on the intensity forecast problem, in particular trying to forecast these rapid changes in intensity, where we see storms strengthen by 30 or 40 miles per hour in one day.

He says predicting sudden shifts is a kind of Holy Grail. Some progress is being made, but it’s painfully slow.

We still have difficulty forecasting it accurately, because it’s — we’re not sure exactly when it’s going to start or how long it might last.

But, in 2017, for example, we had 39 instances of rapid intensification in the Atlantic Basin, and we forecast six of them correctly. Now, that doesn’t sound like a lot, but 10 years ago, that number probably would have been zero.

There are a lot of factors at play, and forecasters struggle to identify the triggers.

Aboard Kermit, they are focused on vertical wind shear, a sudden change in wind direction as altitude changes. Wind shear causes cyclonic storms to tilt, reducing their ability to gain strength. So a sudden decline in wind shear can lead to rapid intensification.

They spend a lot of time on the westward edge of Florence, sampling the environment where the storm is headed, in addition to plowing through it.

Heather Holbach is a meteorologist at NOAA’s Hurricane Research Division.

One of the main goals of our research is to try and collect data that we can use to understand this process, which is why this flight is really interesting, because we’re potentially catching the beginning of the reorganization of Florence before it begins to intensify. So that will really help inform us about the whole process that Florence will undergo in the coming days.

Hurricane forecasting has come a long way since the early days of airborne storm hunting.

They are presently reporting 45 to 50 knots of wind in the storm. We expect to hit more than that.

Jon Zawislak is a scientist at the University of Miami.

It’s a real combination of having more satellite measurements, and then the aircraft measurements, such as we’re taking today, and just generally we’re seeing improvements in computing power and such, so we can get higher-resolution models, better parameterization of certain things like clouds, processes happening near the surface, and then maybe even including how the ocean may interact with the atmosphere as well.

But even as forecast improve, the Hurricane Center is focused on how best to communicate all the complex, often misleading data to the public.

It’s a new kind of weather front, where physics, math and meteorology meet the social sciences. For example, while we all tend to focus on the most likely path of a storm, the so-called cone of uncertainty, it doesn’t tell the whole story about who is at risk.

You can’t sit there and say, well, now I’m outside the cone, whew.

Kenneth Graham is director of the National Hurricane Center.

It’s not a cone of impact. So I think we still have some work to do to really talk about what some of these things like the cone mean and get people to understand the impacts could be hundreds of miles away from the cone.

Case in point, Hurricane Irma last year. The storm left downtown Jacksonville inundated, even though it wasn’t anywhere near the cone of uncertainty.

Aboard Kermit, scientists and engineers are trying to put more certainty into the cone. Satellites, using radar, can measure how rough the sea is, and that correlates to wind speed.

But how accurate are they? Data gathered by the aircraft is used to calibrate the satellites and thus refine the models.

Our objectives are both to calibrate and validate and improve the current satellite sensors that are up there, and also investigate new remote sensing technologies. As new satellites are launched, we try to conduct these flights to validate the measurements in the extreme conditions.

Eight hours and 19 dropsondes later, we find ourselves on final approach to Bermuda. The data is good and plentiful, and the crew is tired, but happy.

In the days that followed, Florence intensified rapidly, just as they suspected. They hope missions like this will help make it possible to one day turn those suspicions into predictions.

For the “PBS NewsHour,” I’m Miles O’Brien in Hamilton, Bermuda.