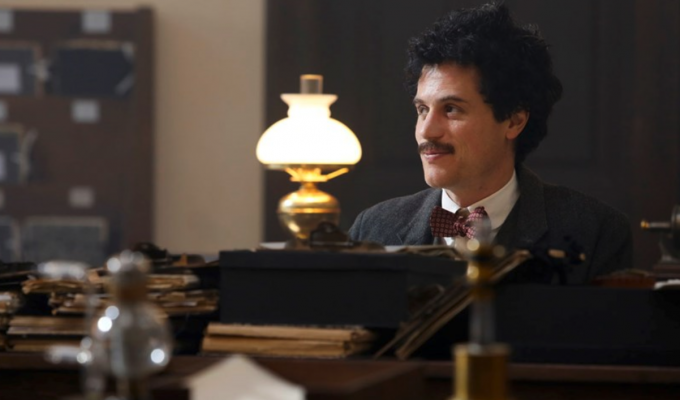 Chapter Four is where it all begins.  We know and revere Albert today because of the work he published in 1905, which this episode covers.  Albert publishes four papers in one year that shake the very foundations of physics forever, earning 1905 the name Annus Mirabilis, or miracle year, from science historians.  And yet if I had to choose a theme for this episode it would be Child Care.  The soundtrack to the monumental breakthroughs he achieved in physics is the cries of little Hans Albert.  For every brilliant thought experiment there were ten diapers to change, a bottle to warm, and a baby to soothe.

The four papers Albert publishes cover the photoelectric effect, Brownian motion, special relativity, and the equivalence of mass and energy, a.k.a. the most famous equation in the world: E=mc^2.  While most of us have no idea what it means, we can still recite it by heart.  As for the other papers which, again, most of us don’t have an inkling about, the show does an excellent job of giving us a good overall sense of what is going on while not trying to explain his work exactly because each paper would be a series unto itself.  We are dealing with light, molecules, time, and motion and none will be the same again.

The animations, once again, do an excellent job of conveying what Albert’s after while keeping the story grounded.  Whether it’s his sugar dissolving into molecules in his coffee or the fantastic lightning strike while on a train, we are sucked into Albert’s mind and swept along in his thought experiments.

Over and over again I laughed as characters take his published papers in hand and we watch as their expressions go from derision to complete amazement.  It’s hard to imagine you could even read a proof that quickly not to mention absorb it, but the larger shift is well represented.  For over 200 years, Newton and his laws reigned over physics and now, suddenly, the ground is shifting.  In the timeline of physics breakthroughs, this is a massive earthquake.

Using Max Planck to express that shift is a fantastic decision.  Planck’s understudy repeatedly hands Planck Albert’s published papers, trying to convince him that this guy is onto something.  It becomes a trope throughout the episode.  Planck continues to dismiss Albert, a patent clerk, but each time more uneasily until he finally begins to admit that Albert is a real intellect.  In fact, Einstein takes both Planck’s and, our old nemesis, Philipp Lenard’s work and combines them to show how light is both a wave and a particle–a question that physics is still chewing over today.  By the end of the episode, Planck is forced to confront the realization that this patent clerk from Bern may be supplanting Newton.

But, while his work was surpassing Newton’s laws, Albert’s life couldn’t escape them. The third law, which says every action has an equal and opposite reaction, in particular stuck hard.  Every transcendent breakthrough was quickly countered with a personal catastrophe.  Whether it’s Mileva’s parents suddenly leaving or another fight between Mileva and Einstein’s mother, the couple can’t catch a break or an ounce of sleep.  The bigger the breakthrough, the louder Hans Albert would scream.  If ever there was an advertisement for universal child care, this episode is it.  Had Switzerland of the early 1900’s been so enlightened who knows how many more brilliant insights Einstein would have had.

Like a carefully constructed building, the series continues to frame each Chapter in a clever and engaging style that is worthy of its subject.  The ground floors are beginning to reveal an elegant architecture, not only does the story of Albert Einstein continue to emerge in all its complexity but also the lives of his contemporaries and peers.  In the previous Chapter, Albert’s turbulent life after university was framed by Wilhelm Roentgen, the first Nobel Prize winner in 1901, and the jealous Philipp Lenard, whose work helped Roentgen achieve the Prize.

It is an excellent demonstration of the interconnected nature of physics.  While many physicists are making contributions, it is the few who are able to see the broader field, to see how others achievements, their equations and theories, fit together.  They are able to complete the puzzle and reveal the larger picture.  You quickly see how petty jealousies and politics seethe and grow.  But the series is also giving you a visceral sense of how breakthroughs occur.  Or as Isaac Newton put it: “If I have seen further, it is by standing on the shoulders of giants.”

This episode is framed by Marie and Pierre Curie, who, along with Henri Becquerel, will go on to win the 1903 Nobel Prize in Physics for their work with radiation.  And in this case, there are two levels on which this frame works because, like Mileva and Albert, they are both scientists and a married couple.  What I really appreciated most from this episode is the continued courage with which the writers dive into the working relationship between Mileva and Albert, especially since the historical stakes for the question of collaboration are high and, as I wrote earlier, remain hotly contested.  But rather than take a side, the writers reveal a more likely subtle truth.  In fact, you become so entangled in it yourself you plainly see how impossible it can be to define or credit the roles in a creative relationship.

Mileva is the tireless engine of the relationship, a wholly contemporary woman trying to satisfy the demands of a high powered career and motherhood in an era that valued only one for women.  You are exhausted watching her do research in the library, clean clothes, cook meals, feed Has Albert, stay up all night with Albert to proof his work and troubleshoot equations.  While Albert eventually receives recognition for his work, she receives dirty looks and snide comments, and fights constantly to be treated as more than a hausfrau.  The question of her role is seemingly on everyone’s mind–Mileva’s parents, Albert’s mother, Albert’s friends and Mileva herself.  Finally toward the end, Mileva puts it plainly to Albert, ‘Am I your clerk? Is that it?’  To which Albert replies, ‘Of course not, you are my partner.’

But before you think the issue is resolved, we jump back out to 1903 and the moment Pierre Curie receives the announcement that he’s won the Nobel Prize.  As soon as he sees that his wife’s name is not included, he becomes angry and refuses to accept it until she is also recognized.  Back in Bern, Switzerland, Mileva is reading the final draft of the paper and darkens when she sees that Albert has thanked his friend Michele Besso but not Mileva.  Albert offers up the explanation that he considers them one in his heart, so it wouldn’t occur to him to thank her separately.  While his blindness has again hurt those he loves most, it is the kind of answer that makes us and Mileva unsure–only time will reveal its sincerity.