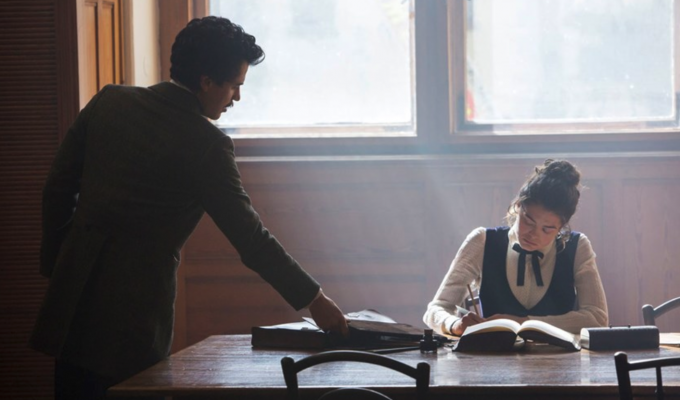 The second episode of ‘Genius’ is surprising at first because it jettisons the dynamic time shifting structure that kept the first episode so moving and intriguing, making connections throughout the entire time and space of Einstein’s life.  I admit, I mourned that loss at first.  But what unfolds is even more refreshing, the story of Mileva Maric – spoiler alert – the woman who will become Einstein’s first wife.  And sadly, the story remains surprisingly relevant for women in science today.

The key to understanding this episode is Entropy.  But don’t worry, that doesn’t mean you have to understand the laws thermodynamics to get it.  The only thing you need to know about entropy is that it basically says, to quote They Might Be Giants, things fall apart as they go along.

Early in the episode first Mileva and then Albert argue with their professor at Zurich Polytechnic, Heinrich Weber, that if the laws of motion are reversible, why not entropy? Albert demonstrates by dumping a box of pencils on the floor and asking if the pencils can move from their organized state in a pencil box to the floor where they lay in chaos, why can’t I imagine some theoretical mathematical solution that allows them to restore themselves back to the box.

Professor Weber rebukes Albert for his theatricality, and the discussion is over.  We all know things do not reconstruct themselves after they’ve fallen apart, no matter the math.  But Mileva’s challenge alone reveals to Albert a kindred mind and that provokes a powerful desire in Albert.  His pursuit of Mileva is on.  But her journey to this classroom is far more interesting than Albert’s and the writers recognize that.

College romance is not normally a topic that strikes you as fresh or challenging.  But the time and place of Mileva and Albert’s meeting make this a more complex romance.  Mileva is Serbian (a ‘Slav’ as she was referred to at the time – WWI is still 18 years away), born into a wealthy family with an early, self taught aptitude and passion for math and science but with two significant disabilities in pursuing her academic desires – her club foot and her sex.

We see flashbacks to her struggles entering all male classrooms and academies.  The cruelties and cold dismissals that you might expect any woman would face in trying to enter the all male world of higher education in 19th century Europe.  Thanks in large part to her father’s persistence and faith she overcomes all these obstacles and makes it to Zurich Polytechnic.

Here is where you might not realize the episode is diving headlong into one of the most controversial periods of young Albert’s life.  The stakes for the relationship between Mileva and Albert are very high in terms of Albert’s future legacy.  Another spoiler alert – in 1905 Albert will publish four articles know as the Annus Mirabilis papers.  I’m sure more will come of them later but they basically rocked the physics world and laid the foundation for modern physics.

The historical question that remains extensively debated today is who deserves what amount of credit for those papers.  Everyone from historians and scientists to white power groups have weighed in.  The existing ‘proof’ for that credit has traditionally swung away from Mileva as a significant contributor.  But the series seems to be reclaiming some of her ground.

One element of that ‘proof’ was the fact that she wound up never receiving her degree from Zurich Polytechnic which many say points to a limit in her mental ability.  But in 1986, Albert’s granddaughter discovered a batch of letters between Albert and Mileva that revealed something no one knew before – Mileva got pregnant toward the end of her study and after failing her first teaching diploma exams, she resat them while three months pregnant, failing them a second time.

In the series, she is presented as resisting Albert’s or any boys approach.  We can only imagine how many times she was taken advantage of in this way.  And her initial fears turn out to be justified as Albert’s cavalier romance and poor academic habits slowly enter her own life and destroy the future she worked so hard to achieve.  The consequences are devastating.  In a world and a field where a woman has to be multiple times better than a man just to be taken seriously, her inability to get her diploma means the end of her academic career.  The final scene where Mileva returns home to her father, a failure and pregnant is truly devastating.

Sadly, I found this episode, set one hundred years ago, resonated profoundly with the challenges women in science still face today.  As the husband of a scientist, I witness all too often the powerful forces of sexism that my own wife faces in her career.  Not to mention the numerous stories I hear from her female scientist friends across many fields.  The glass ceilings for women in science remain real and nearly impossible to break.

As a father of a daughter who would also like to play a heroic role in her life, I found myself genuinely angry at Albert.  I too was once 20 years old and also behaved “like a horse’s ass” as Professor Weber defends Albert, but that only excuses a fraction of Albert’s behavior.

There is a more tragic aspect of Albert’s genius that this episode reveals.  He looks at the world mathematically.  If he can prove a phenomenon with theoretical physics, it doesn’t matter if it’s what’s observed to be true now or not – advances in technology will eventually prove it so.  This intense faith in numbers is what will lead him to relativity – a completely new, mathematical way to understand the physical world around us, especially things like gravity, light and time itself.

But when that same approach is applied to his relationships and his desires, his total disregard for culture and custom doesn’t create new worlds, it destroys them.  And so, in blind pursuit of his passion, he turns Mileva Maric’s world upside down, and ends her scientific dreams.

I suspect the next episode will be even more explosive and revealing as worlds continue to be created and destroyed.