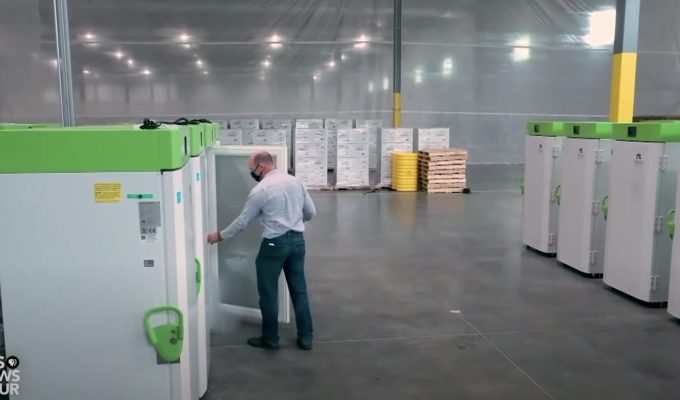 As drug companies around the world rush to develop candidates for coronavirus vaccines, Pfizer announced encouraging early data from its own trials Monday. What do the preliminary results show, and even if they are borne out, what challenges remain with regard to production and distribution of the vaccine? Science correspondent Miles O’ Brien joins William Brangham to discuss.

For more perspective on this news, I’m joined now by Miles O’Brien, our science correspondent. He has been covering the hunt for a vaccine throughout this pandemic.

Miles, great to have you back on the “NewsHour.”

Can you help us understand the substance of today’s announcement? This was still initially — we haven’t seen the data, correct?

Yes. We should do a little bit of trust, but verifying in this one. This is a press release.

We’re waiting for the independent review. The peer-reviewed science work is still unknown to us. But, assuming all of this bears out, this is an extraordinary number. This is — this is a vaccine that will easily get into the Hall of Fame batting .900 percent, 90 percent.

It’s stunning, actually. When you think about it, the typical flu vaccine, its efficacy is somewhere between 40 and 60 percent. But there’s still a lot of work to do here, obviously. We’re talking, in all, of 94 cases among tens of thousands, 94 cases of COVID.

And almost all of those individuals received the placebo, a saline solution, not the vaccine, and that’s where they get that number. It is a vaccine, however, that is really an unproven thing in humans.

It is — uses a piece of genetic code called mRNA. It’s a novel approach to making vaccines. And there’s never been a vaccine brought to the human market that uses this particular technique. Here’s an encouraging part of this, though, William. If all this bears out, all of the vaccines that are out there right now are going after the spiky surface of the coronavirus, the spike protein, including this one.

So, if this was so incredibly effective, that bodes well for the other trials that we’re looking at right now.

Back in March, which seems like an eternity ago, before we had a lot of mask requirements, I spoke with Neil King. He’s a biochemist at the University of Washington’s Institute for Protein Design. And he walked me through this process of identifying a vaccine in this manner.

Figure out how to present this molecule to the immune system in the right way, so that you get the right response.

And, really, for the spike protein, what that means is, which part of this do you want to hit with an antibody to shut the virus down? And then how can we shine a light on that to the immune system?

So, the spike protein appears to be the key. And that really does bode well for all the other trials, William.

So, going forward, you heard Dr. Bourla say that, this year, they think they might be able to get 50 million doses out the door, next year, over a billion.

What do we need to do between here and there getting shots into people’s arms?

So, William, the devil is in the logistics as much as anything. But let’s walk you through it.

Over the next few weeks, they are going to try to get a little more data on the safety of this vaccine. And then they will submit a process and approval for emergency use authorization for the Food and Drug Administration. Obviously, the FDA knows this is coming, so that should happen fairly quickly.

But then, when you start thinking about distributing millions, up to a billion doses, this particular vaccine likes it cold, really cold. It needs to be transported at minus 90-degrees Fahrenheit. That is colder than some of its competitors on the vaccine front.

And so that’s creating a problem with what is called cold chain logistics. UPS is one of the big ones. They showed us a raft of freezers that they have geared up in order to try to deliver this vaccine without it getting spoiled.

Pfizer, meanwhile, has come up with its own shipment scheme, a little box that has some dry ice in it. And, hopefully, they will be able to get these vaccines to people without them being spoiled. Hopefully, they will manage. But that hasn’t been tried.

Let’s say they do get authorization to distribute these.

Pfizer is not the one who decides who gets those precious first doses, right? Who decides that?

The federal government will make the decision, ultimately. And there are all kinds of review panels that are trying to make specific decisions about the order of business, as it were.

But everyone agrees that front-line health care workers should be right at the head of the queue, and then, of course, the elderly and other people with preexisting conditions which might be adversely affected by the coronavirus more than others.

The government has already signed on with Pfizer for $2 billion to buy 100 million doses. But you have to remember Pfizer and many of the others, except for Johnson & Johnson’s vaccine, require a booster.

So, it’s actually two shots, one, and then, a couple of weeks later, a second shot. So, getting people in for the first shot in a country where we have a lot of people who are suspicious of vaccines, that’s one thing, and then making sure they come back for the second shot, all those things have to happen in order for this to work.

All right, Miles O’Brien, thank you so much for helping us wade through all of this.