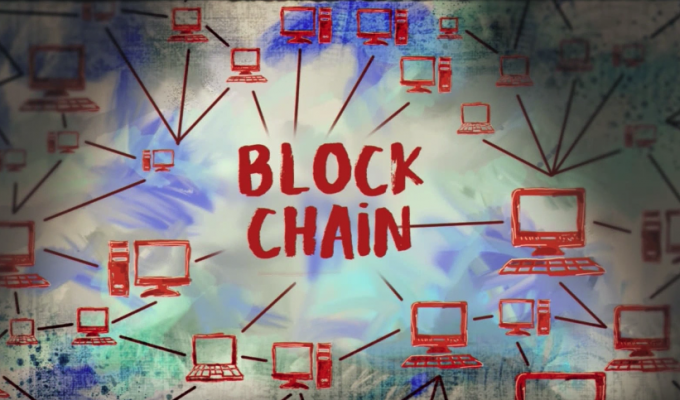 The technology underpinning blockchain is a powerful decentralizing network architecture that could revolutionize many industries. Now, some artists are leveraging blockchain to help guarantee the authenticity of their work — and ensure that they get paid. PBS NewsHour science correspondent Miles O’Brien reports on how digital documentation is putting power back into artists’ hands, even when no tangible object exists.

Now: how some in the art world are using technology to help guarantee the authenticity of their work and help ensure artists get paid.

It’s a story that’s a mix of art and technology.

Miles O’Brien has the story for our latest segment on the Leading Edge of technology and part of our ongoing Breakthroughs series.

In the capricious world of fine art, there is little that is fair and equitable for the artists themselves.

If you are at the top, your work can fetch astronomical prices. This David Hockney painting sold for $90 million in 2018. But Hockney’s cut? Zero.

And, of course, for the vast majority of artists, zero is an all-too-familiar number. They don’t call them starving for nothing. But technology may be changing the landscape, with some bold brushstrokes.

I am a big proponent of what I call, the new art economy.

Artist and entrepreneur Jackie O’Neill is doing her part to create that new economy.

She started a company called the Blockchain Art Collective. She believes helping artists monetize their work begins with a better system for identifying what is real and what is fake.

For 10 dollars, she sells artists a little gadget you might have implanted in your dog to keep him or her from being lost, a radio frequency I.D. chip.

So, if you try to remove it, it will fall apart into a bunch of little pieces, and then the microchip pieces will void once you get to the point of actually removing that.

A smartphone app can scan the RFID, which stores information about the piece, the artist, title, date, medium, area, region, and origin.

And it has a unique identification number. It’s a way to prove it is authentic.

Authenticity basically says that this rare, precious, unique object is what people claim it is, and it’s hard to prove that often. So, when people are going and trying to prove authenticity or provenance, they usually go to the expert. Experts usually are art historians.

Anyone who watches the “Antiques Roadshow” knows how that works, authenticity, scarcity and value determined by seasoned experts, sometimes leading to thrilling moments.

But as the name of Jackie O’Neill’s startup suggests, much of the work of the middlemen is supplanted by storing all that history, or provenance, with blockchain technology.

Blockchain enables cryptocurrencies like Bitcoin and Ethereum, but it has many more applications. After all, it’s all about verification and trust. Instead of relying on an accountant, appraiser or an auction house to keep an accurate database of an art’s provenance, blockchain allows the whole world to watch.

The chain of these records is copied on thousands of computers, making it virtually impossible for anyone to cook the books or, in this case, forge a piece of art.

There’s way more complexity that can be baked into it now that benefits the artists over time, that automates the gallery commission, saves time and money, and you don’t have to work so hard to prove that authenticity and provenance.

And it works even if there is no physical object, when the art is purely digital, nothing more than a binary code collection of 1’s and 0’s.

John Watkinson is the co-creator of CryptoPunks, a groundbreaking pixel art sensation. In 2017, he and co-creator Matt Hall produced 10,000 CryptoPunk characters. They kept 1,000 for themselves, then offered up the rest online, for free.

There is male, female and there’s a few rare types. So, you can see there’s a zombie, an ape. The most rare is an alien. There’s nine of those.

We wanted to make it so that there was sort of a scope of rarity.

Each character was assigned a link in the Ethereum blockchain, so the authenticity, scarcity and ownership of the Punks was all instantly and globally provable.

We sort of hit a nerve, I think, in that the audience that was into these currencies, the art appealed to them and the collectible aspect appealed to them. It all worked together, but it also was just an interesting answer to question, like, do you feel like you own these things? And the answer was yes.

Right now, the average value of the CryptoPunks, including the common ones, is about $40 to $50. But the high water mark, one rare alien, which sold for $16,000.

It’s a little different than having a painting on your wall. But, yes, I think it’s clearly something that’s coming, because the younger generations are totally comfortable with digital ownership, and digital things feel real to them. So it feels like it’s something that will naturally become more prominent.

An all-digital art market is an empowering prospect for aspiring artists. That’s a big driver behind Dada.Art. It’s an online social network that allows artists to collaborate and communicate with each other through their drawings.

So you make a drawing, and somebody from anywhere in the world can reply to you with another drawing.

And this creates these spontaneous visual conversations among people from all over the world who may not know each other. It’s a really pretty magical thing.

Judy Mam is the co-creator of Dada.

The first person who draws decides on a topic or a theme, colors, but the people who follow, to our surprise, really try to create a very coherent work of art.

This Dada piece began with a portrait of your humble correspondent, and ended with this depiction of our favorite anchor Judy Woodruff.

Hola, Boris. How are you?

Judy Mam introduced me to the artist, Boris Toledo Gutierrez of Santiago, Chile. He is a frequent Dada contributor.

Boris, it’s a great pleasure to meet you. Tell me a little bit about what you find interesting and fun about drawing on Dada.

“What is generated by the community and the fact that people make all these works, but that they are always shared in common.”

When Judy Mam and Dada.Art founder Beatriz Ramos looked at ways to help their artists monetize all this stunning creativity, they too turned to the blockchain. It allows anyone to own an individual drawing or an entire conversation.

We want to give artists a guaranteed basic income, everyone in the community. We would hope that artists could make ends meet by being artists. It’s like no one ever thinks of dentists, oh, poor dentist are struggling, right? The dentists need to have four gigs in order to survive. It should be the same with artists.

Even established art icons are dabbling in this brave new art world.

In 2018, Christie’s, with help from blockchain art registry startup Artory, sold a collection whose provenance was stored on a blockchain. It was used to give buyers more confidence, but blockchain could also make it possible for an artist to capture royalties in auctions like this or wherever and whenever their work is sold.

It’s the norm for composers and novelists, so why not artists?

Every time this object gets resold, I can contractually automate, embed securely that each subsequent sale of an art on the secondary market for living artists, for artist estates, they can seek 10 percent of every single subsequent sale. Right now, they don’t see any of that.

No doubt, David Hockney would appreciate the royalty. As it is, some of his work is finding its way onto the chain.

A Korean company intends to sell fractional ownership of his work, meaning many people can own a share of a Hockney piece, a way to please to art fans with shallower pockets. But even though they could guarantee royalties as well, these blockchain sales will not put anything in Hockney’s pocket.