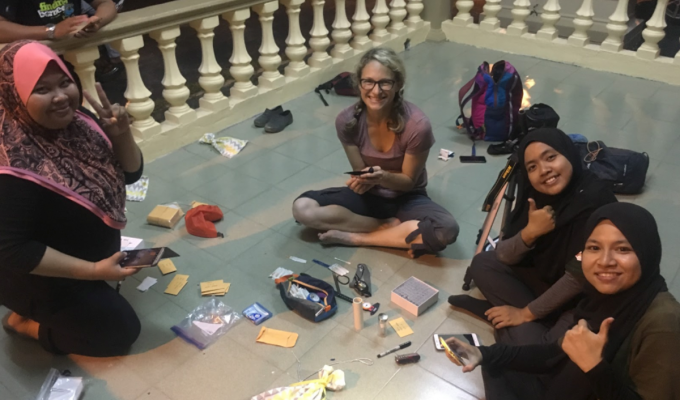 On the fourth day of my field season, I found myself on a tiny boat with three students from the Universiti Kebangsaan Malaysia, setting off down a remote jungle river in search of birds. The putt-putt of the outboard motor mingled with the sounds of bird songs, monkey calls, and the rustling of palm leaves in the wind. A wave of satisfaction washed over me. In that instant, all the months of emails, permit applications, and meetings in government ministries were worth it. Fieldwork had finally begun.

I’m in Malaysia searching for Pacific swallows, a common but little-studied relative of the well-known barn swallow. Pacific swallows are aerial insectivores, meaning they feed by swooping through open areas near agricultural fields, rivers, and garbage dumps and plucking insects out of the air. They build their nests on the sides of buildings, inside barns and sheds, and under bridges.

The traditional way to catch birds is to string up nets made of thin mesh in shrubby or forested areas. You then hang out and wait for birds to fly into your nets. Mist netting is fairly civilized– depending on your field site, you might even be able to have tea (or beer) in between net checks. However, swallows are wily. They have excellent eyesight and can easily see mist nets. This means we need to resort to more creative approaches to catch them. Fortunately, swallows have an Achilles heel: their nests.

There are two basic ways to catch swallows. The first method works if nests are in an enclosed structure, like a shed or a barn. The birds fly in and out of these structures throughout the day as they check on their nests. If the structure is large and dark, we can have a net waiting in the darkness and hope the birds don’t see it when they fly in. If we’re dealing with, say, a small shed, we need to wait until the birds fly inside and quickly cover the exits with a net. We then crawl into the shed and chase the trapped birds around until they fly into the net while trying to escape. This is extremely undignified.

If nests are on the outside of buildings or under bridges, however, there is no way to trap the birds during the day. In this case, we have to resort to the second, even more dishonorable method of catching swallows: waiting until nighttime and catching them while they sleep.

And that brings us to the boat. Our search for Pacific swallows brought us to a fishing jetty on the Sugai Rembau river in the Malaysian state of Negeri Sembilan. One of the students has research plots in this area and had spotted swallows nearby. Sure enough, there were swallows flying around when we arrived at the jetty, and we found several nests under the docks and on nearby buildings.

A local fisherman agreed to take us out on his boat to scout for nests under bridges. We set off from the jetty, the boat dodging fallen palm trees and submerged logs.

The first two bridges had a few swallows flying around, but the nests under the bridges were old and broken. The third bridge, however, was teeming with birds–not just Pacific swallows, but also house swifts and Asian glossy starlings.

WATCH: Liz stumbles upon a similar situation in Borneo, with Pacific swallows nesting under a bridge. Video: Liz Scordato.

We tried putting up a net under the bridge, but it was clearly visible in the daylight. Our only option would be to come back at night. We returned to the jetty at sundown and watched the swallows settle on to their nests for the night.

Once it was dark, we climbed into the boat and headed back down the river. The river at night was quiet and surreal, with swarms of mating fireflies lighting up the trees like tiny Christmas lights, all flashing in synchrony. Our sweeping flashlights picked up glowing crocodile eyes as we carefully navigated around fishing nets and prawn traps.

Under the bridge, my headlamp revealed sleeping starlings and swallows. I’ve caught lots of birds at night, and have a system that involves two people quietly stretching a short net across the front of a nest, and then a third person using a pole to gently poke the birds awake. They then startle and fly into the net. It is very effective.

However, things rarely go as planned. As I was organizing the nets, an overly enthusiastic fisherman hopped off the boat, grabbed a large round fish net, and started swinging away. He did manage to catch three swallows before waking up the rest of the birds. We would have to return and try for more birds the next day.

We put the swallows into bird bags and started back to the jetty to collect measurements and blood samples. Despite the disruption at the end, I was elated. After months of preparation, we had our first Pacific swallows. If the rest of the field season continues like this, it will be thrilling success.

WATCH: Less success in the coastal town of Bintulu, where a species of swifts seems to have crowded out the Pacific swallows.

Ed. Note: Elizabeth Scordato is an evolutionary biologist at California State Polytechnic University, Pomona, studying how environmental variation influences the evolution of bird signaling and the formation of new species. She will be making a special exception to her “no email during field seasons” rule to update this space on how her Pacific swallow fieldwork is going. Please follow along!