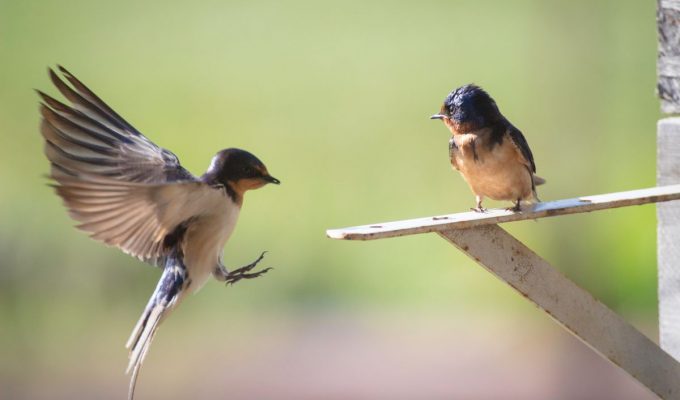 When we study animals, we often try to work in pristine, “natural” habitats. I have spent many months wandering around remote forests with binoculars, a notebook, and a recorder, tracking down singing birds and recording their songs, with the goal of understanding what types of information singing birds are communicating to each other. These types of field studies offer a window into the evolution of complex signaling systems, because we generally assume that the habitats in which we find birds are the habitats to which they are broadly adapted.

However, a reality of our world is that natural habitats are rapidly shrinking, and the influence of human activity is inescapable for many organisms. The consequence of all this anthropogenic change is that as biologists, we are increasingly realizing that we need to leave the forests and follow our study subjects into more man-made habitats.

A few years ago, I began studying barn swallows, a species of bird that lives exclusively in human structures. That meant tracking these birds across Siberian dairy farms, Egyptian villages, and Chinese cities, and catching them inside people’s chicken sheds, above their doorways, and, once, inside someone’s kitchen. I began to wonder about how animals experiencing novel and changing environments may, in turn, alter communication systems that evolved under different conditions.

Two recent studies published in the journal Proceedings of the National Academy of Sciences highlight some of the more unexpected ways that human activity may affect animal signaling and ultimately lead to negative consequences for wild populations.

Many species of birds have naturally white or pale belly plumage. By measuring specimens collected over the last 135 years in the US Manufacturing Belt, DuBay and Fuldner showed that in the early years of coal-fired power plants, naturally white birds had abnormally gray-colored feathers, the result of soot deposition. Once the US shifted to cleaner sources of fuel and air pollution regulations were adopted, specimens started to turn white again.

This study has important implications for how we track air pollution, of course, but it is also interesting from the perspective of animal signaling.

“Our initial study used birds to reconstruct historical levels of soot pollution, but what are the consequences of soot pollution on the birds themselves?” DuBay told me. Plumage coloration, like song, is used in mate choice in many species. Patches of black or grey feathers are often used to signal dominance among males, and can be linked to higher reproductive fitness.

“Dark colors are associated with androgens (such as testosterone) and body condition,” noted Dr. Joanna Hubbard, a biologist at Truman State University, who was not involved with the study. “Individuals displaying larger and/or darker plumage patches possess the behaviors and the physical condition to back-up the signal.”

Now, imagine if some independent source–say, air pollution–makes birds darker, unrelated to their actual dominance status. Then the honesty of that signal is disrupted: the darkest males may not be the highest quality males, just individuals that happen to live in sooty areas. “What happens when plumage patches are covered in soot, obscuring important signals that have evolved in cleaner environments?” asked DuBay.

We don’t yet know the answer to this question. But if the best quality males are no longer the ones producing the most offspring, then there are interesting implications for how the population will change in the future. “When these signaling relationships break down, we might expect to see a decline in the quality of the offspring being produced in the population,” said Hubbard.

One thing we do know? There’s definitely more work to be done.“These questions have general implications for the evolution of signaling,” said DuBay. “We can now test specific hypotheses about the ecological function of plumage-mediated signaling and its responses to a changing environment.”

The second study, led by Dr. Nathan Kleist of the University of Colorado, Boulder, showed that chronic, anthropogenic noise seems to cause long-term stress on surrounding bird communities.

These authors have studied birds that live around oil and gas wells in New Mexico for years. Some of these wells use noisy air compressors to aid gas extraction, while other wells do not have compressors and are quiet. By using a clever experimental design that compares noisy and non-noisy areas, the biologists have found that while some species clearly avoid nesting near the compressors, others seemed to tolerate the noise.

The new analysis of stress levels (interpreted by measuring the hormone corticosterone) suggests that birds breeding in these noisy environments experience long-term, chronic stress that leads to reduced fitness.

Although the exact nature of the relationship between noise and stress is not yet known, the authors hypothesize that reduced communication efficacy is a major factor. Birds living in noisy environments may not be able to hear alarm calls warning them about predators, which forces them to spend more time engaged in vigilance activity and less time foraging and feeding their chicks.

“Being able to hear the songs of other species might indicate the lack of a predator in the environment,” Kleist told me. “Any disruption of these cues may lead to uncertainty, anxiety and stress, even in cases where no direct threat exists.”

Birds also use songs to defend their territories from other males and to attract females.

“Anthropogenic noise is most powerful at low frequencies, which leads to the masking of information that is often associated with mate quality,” Kleist added. “Disruption of these honest signal may have consequences for populations in affected habitats.” For example, birds that can’t hear their neighbors may engage in frequent, energetically costly territorial disputes, spend more time searching for mates, or choose low-quality mates as a consequence of signal masking.

Overall, anthropogenic noise has an inescapable impact on ecological communities. “High noise levels cause a huge reduction in an animal’s listening area,” said Dr. Clint Francis, a biologist at California State Polytechnic University and the senior author on the study. “This appears to cause changes in psychological states, physiology and behavior.”

As with the sooty birds paper, this study highlights the many ways in which human activity interacts with complex ecosystems, and the challenges we face as we try to understand and predict these effects. There are not yet not clear answers, but creative studies combining natural history with novel methodologies reveal new dimensions to the questions that we so urgently need to be asking.

As we live in a world ever more dominated by people, we need to consider how human activity shapes the patterns of variation we observe in wild populations. I’ll be embarking on an expedition to Southeast Asia next month to start a new project studying how birds have adapted to human-altered environments. I’ll be writing about that expedition in this space, so stay tuned.

Editor’s Note:
Liz’s research reminded me of the time I visited Chernobyl. During my investigations of the effects of the world’s worst nuclear fallout incident, I met scientists who showed me the effects of persistent radioactivity on animals–including how the coloration of barn swallows was changed by the perilous environment. -Miles O’Brien