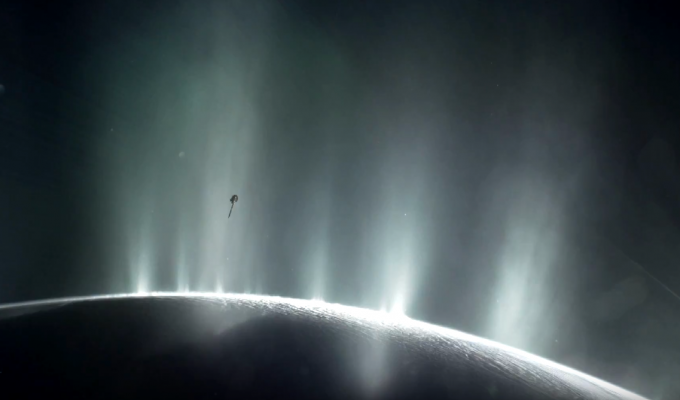 Wherever we find liquid water on our humble home in the solar system, we find life. It doesn’t matter if it’s a hot acid bath at Yellowstone, a dew drop in the Atacama Desert or the caustic waters near hydrothermal vents deep in the Marianas trench.

Astrobiologists hoping to answer the fundamental question of whether we are alone in the universe have long suggested we should explore space with a virtual divining rod in hand. Follow the water, and there’s a good chance we might find something swimming in it.

If we go to a place with water that has the chemistry, pressure and energy source that allows life to thrive here on Earth, and we find nothing living there, that too is a profound, albeit lonesome, finding.

Could we be alone in the universe? Is life on Earth a one-off event?

My gut tells me it is not. But a hunch won’t cut it. Fortunately, we are alive at a time where we have the technology and the resources to get an answer. But do we have the will?

While the hunt for ancient signs of water and life on Mars can and should continue, many scientists believe the icy moons of Jupiter and Saturn are more likely to hold the answer in their oceans beneath the ice.

To riff on a famous quip from the notorious bank robber Willie Sutton, “Because that’s where the water is.”

There’s one other thing to consider. Should we find evidence of life–ancient or extant–on Mars, it might be difficult to say with certainty that it proves a “second origin.” Mars and Earth are celestial neighbors and have been swapping meteors for billions of years. It’s quite possible living things hitched a ride on some of those rocks… in either direction. There’s a good chance we are all Martians.

But if we find life on a much more distant place like Europa, scientists might be able to conclude that wherever a crockpot with the right ingredients simmers, life emerges. Extrapolate that with the growing catalog of distant solar systems with Earth like planets, and suddenly the universe is teeming with life.

NASA is on its way to Europa in the coming years. It’s a long, challenging, expensive mission, but the potential payoff is huge.

The Republican congressman from the west side of Houston, John Culberson, has been pushing this idea for more than a decade.

He and I talked about space in general and Europa in particular in his Washington office a few weeks ago. You can watch the PBS NewsHour story that came out of that here. And if that whets your appetite for more, check out this director’s cut of the interview.

REP. JOHN CULBERSON (R-TX): We always wonder, am I alone? And that’s one of the great questions of humanity.

MILES O’BRIEN: It’s interesting because wherever we find liquid water on this planet, no matter whether it’s the smokers, whether it’s the acid baths of Yellowstone, there’s something living in it. Do you think that it’s highly likely that there is life somewhere underneath that icy surface? Is it likely to be a second genesis?

CULBERSON: The best minds in the scientific community believe there’s life in the oceans of Europa because it contains two to three times more water than all the water on Earth. What we can see spectrographically of the water ice, frozen ice shell of Europa, we pick up salts, it’s pure water ice. We’ve seen with the Hubble Telescope giant plumes of water being blown into the space in the south pole of Europa.

We know that’s true in the moon of Saturn Enceladus, which is a free floating ice shell over a worldwide ocean, where Cassini flew through the curtain plum on Enceladus and tested the snow and determined that it was saltwater and it have been hydrothermally altered by being sucked into and ejected from the rocky bottom of Enceladus’s ocean.

This is going on in Europe and there’s increasing awareness in the scientific community that life may have originated on Earth at the bottom of the ocean, on the hydrothermal vents because there’s far more energy there, all the chemical elements of life are there, and it’s a very stable, quiet environment, free from asteroid impacts or radiation from space.

There are open crevasses in the ice of Europa that allow the ocean beneath to vent directly into space. They’re going to work on landing near one of those crevasses. Who knows, maybe it’s going to snow krill on top of the lander, and they will be able to directly measure snow, frozen salt water, coming directly out of that ocean.

O’BRIEN: So a lot of people thought that the Lander had to have that penetrating capability to be able to melt through ice. You think there’s enough data there at those crevasses that are off-gassing or water is coming out of them, that you might not need to go beneath the surface?

CULBERSON: You still need to go below the surface. You still need to get through the ice and down into the ocean with a submarine that is artificially intelligent, that’s got the instrumentation on board when you reach the bottom to be able to image and sample what are undoubtedly black smokers like we have here on Earth. The hydrothermal vents, the mid-ocean ridges have this tremendous volcanic vents where superheated salt water is being ejected out of these vents and they’re loaded with all the chemical elements of life.

O’BRIEN: So, as it stands right now, the Trump budget has a Europa Clipper mission, with an orbiter but no lander, right?

O’BRIEN: So, you’re going for a lander?

So the Europa orbiter and lander are already written into law, they’re fully funded. It’s already taken care of. The path forward is mapped out very carefully.

O’BRIEN: So if NASA doesn’t do this, presumably some administrator could be arrested for breaking the law.

CULBERSON: No, it doesn’t work like that. It’s a —

O’BRIEN: But it is–it would be against the law, right?

It is in our DNA as humans and it’s what makes us American: to blaze new trails, to go where no one has gone before, and to make discoveries that will transform the history of humanity. I think that’s who we are as Americans. It’s what makes us great as a nation.