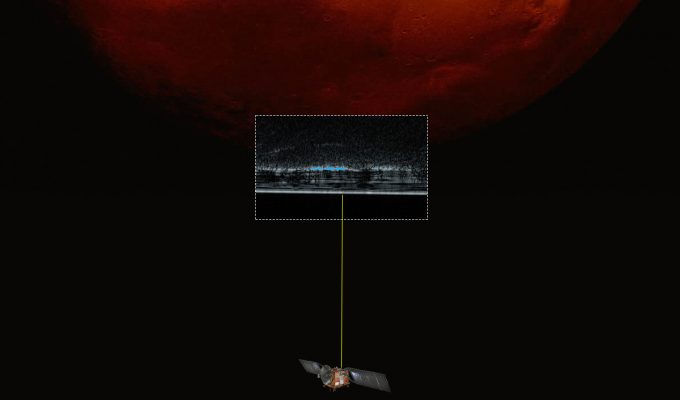 A huge announcement this week from the European Space Agency: they have found liquid water on Mars. Originally aired on the PBS NewsHour. Previous detections of water on the Red Planet were have all been frozen–though both imaging and on the ground sampling have also shown that liquid water was present on Mars’ surface in the past. Miles joins PBS NewsHour’s Amna Nawaz to discuss the findings and their implications for potentially finding alien life.

Finally, some tantalizing new findings about water on Mars.

Naturally, it raises more questions about the possibility of some kind of extraterrestrial life there.

It’s a perfect fit for our Miles O’Brien and our weekly segment on the Leading Edge of science.

Amna Nawaz caught up with him.

They may have long suspected it, but scientists have finally found for the first time a large watery reservoir, possibly a lake, beneath the southern ice cap of Mars. Radar suggests the reservoir is more than 12-miles-wide and similar in some ways to lakes found beneath the Greenland and Antarctic ice sheets on Earth.

It’s salty and buried nearly a mile below the three-billion-year-old ice cap. For many, it’s a huge moment.

And that includes Miles, who’s long been covering the latest on the Red Planet, and joins me now.

Miles, for those of us who haven’t been following the Red Planet all the years, why is this such a big deal?

Well, Amna, I guess scientists, myself, and anyone who watches this closely would have been surprised if they didn’t find liquid water beneath the surface. But it’s not an easy thing to do.

You know, really, when you think about this, this is the culmination of about 150 years of work that began with an Italian astronomer by the name of Schiaparelli, who trained his telescope on Mars and saw what he called canali, which, translated, should mean channels, but got mistranslated into canals, and really started off a whole trend which led us to “The War of the Worlds” and the idea that there were really Martians.

This has gone on recently with NASA missions, including the Pathfinder missions, the Curiosity, Spirit, and Opportunity missions, where there was all kinds of inferences of past water, mineralogical data, that sort of thing.

So if there’s a hot core in the middle, water ice at the poles, somewhere along the way, there has got to be water. And that’s what they discovered.

And the significance of that is, on this planet, wherever we find liquid water, no matter where it is, bottom the ocean, in a hot acidic bath in Yellowstone, underneath a glacier in Antarctica, wherever that may be, you find life.

Let’s talk about how we got here in the first place. What have they been looking at? What did they use? How do we know that the water is there?

It’s a European orbiter by the name of Mars Express. It’s been an orbit for 15 years. And it has a radar device. It has this long-wave radar. It’s kind of ground-penetrating radar that’s been looking, analyzing beneath the surface of Mars for all this time.

The data goes back really about a decade. And the scientists have just been trying very carefully to make sure what they thought they saw is what they thought. And, in fact, after all these years of going through all the possibilities of what it might or might not be, they have come to the conclusion it just has to be water.

And scientists I have talked to today say it’s a very elegant piece of science. There’s a radar return about a mile-and-a-half below the surface of the south pole ice that is clear-cut signs of liquid water.

OK, so let’s hear from one of the scientists who was actually the lead on this research. He’s a planetary scientist in Italy.

This is him talking about exactly what they did find there. Take a listen.

The radar data tell us that this water must contain a large amount of salts. This is because the ice above it is very transparent.

And this wouldn’t be possible if the ice was too warm, too close to the melting point. So, we have to conclude that the water in contact with the ice must be at least minus-10, minus-20, maybe minus-30 Celsius.

So, Miles, very salty water, very cold water. You mentioned life where there is water. What can actually live in these conditions?

Well, your tiny, microscopic things, but that might be the extent of what we ultimately find — and it won’t be easy to do, but maybe down the road — in the way of Martians.

It’s important to understand that, you know, at that temperature, you would think it’d be solid. But if it’s a briny solution, if it’s a salty solution, and under pressure, which is what you would have in this case, it can stay at liquid form at much lower temperatures.

And that part of Mars is a very cold place, indeed. The question is, how would you ever verify if there were microbes there? That would require some drilling. And when I say that, some significant drilling, more than a mile-and-a-half deep at the south pole.

So is that what’s next? We’re going to possibly see missions to drill on Mars?

Well, the devil is in the details on that one, for sure, Amna….

… because, if you think about what it takes to do, you know, “Armageddon”-style drilling with Bruce Willis on Mars, it involves a lot of very heavy machinery and drill bits, which is very expensive and way beyond our capabilities right now to get to Mars.

One of the scientists I was talking to today, the principal investigator on Spirit and Opportunity, Steve Squyres said, you know, if there’s water there, it’s very likely it is in the mid-latitude regions, which would be a better place for humans to go anyway. And it might be at a shallower depth, because it’s warmer there.

So maybe, just maybe, they could do some drilling mid-latitudes, and it would be not as deep. But, either way, it’s not an easy mission. So it’ll be — we will have to sort of stay tuned as to whether there are microbes in this underwater lake in — on Mars.

We will be staying tuned, indeed. We know you will as well.

Miles O’Brien, always great to talk to you.