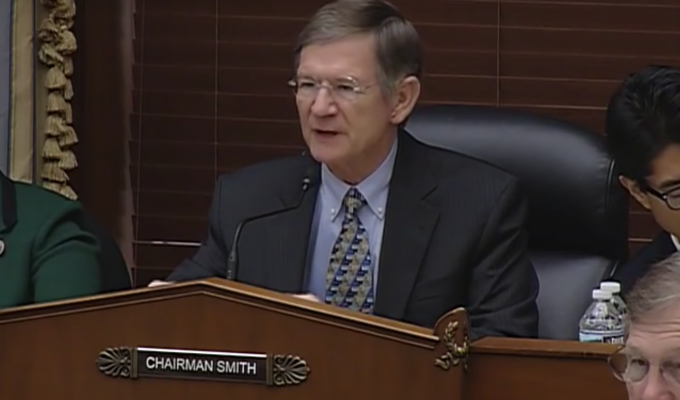 Tomorrow, the House Committee for Science, Space, and Technology is holding another hearing–this one entitled “Climate Science: Assumptions, Policy Implications, and the Scientific Method”.

For Climate Change Deniers, Flat Earthers and their fans, there’s been a lot of great committee games to tune in for this legislative season, including such gems as “Making EPA Great Again” and “At What Cost? Examining the Social Cost of Carbon”. But perhaps the granddaddy of them all will be the one to come tomorrow.

The stated purpose of the hearing is to “examine the scientific method and process as it relates to climate change” and “focus on the underlying science that helps inform policy decisions.”

All-Rolls Royce Teamer, Chairman Lamar Smith, fresh off his conference tournament win at the Heartland Institute’s International Conference on Climate Change, will be overseeing the action. He’ll be dishing the rock to expert witnesses who could have a lasting impact on science policy in the United States, so it’s really coming down to the wire.

What esteemed guests have made it this far into the Big Dance? Meet the Final Four witnesses in our March Sadness bracket. 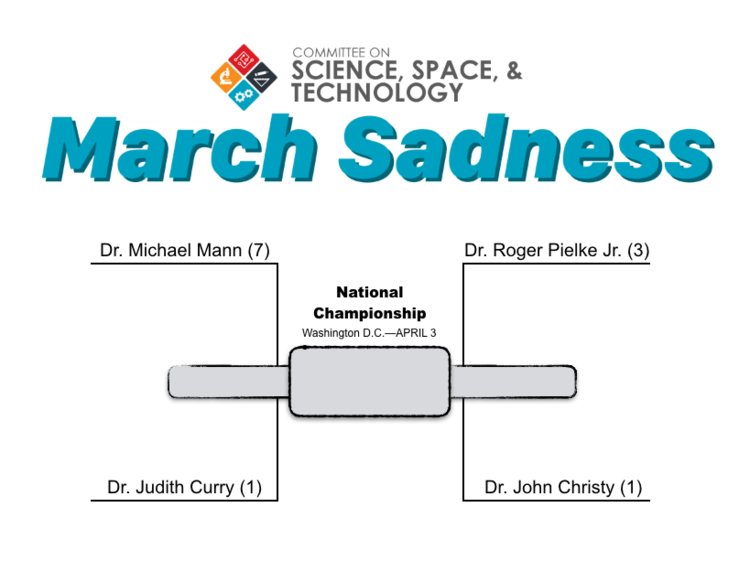 Perennial powerhouse Dr. John Christy is a veteran of committee hearings. He made a strong run in the the House Natural Resources Committee, saying “our thermometers only tell us what has happened, they do not tell us why it happened.”

He’s a real closer… offering up this three-point soundbite at the buzzer: “The fundamental thing here is that there is no proof that [anthropogenic carbon] emissions cause specific things you see in climate. So how can one link a cause with an effect here, because there is no proof of it.”

A well-published climatologist who has contributed to the influential 2001 IPCC report, Christy nevertheless downplays the consensus of climate research that shows that humans are the drivers of warming temperatures and climate change. “Dr. Christy argues that reining in carbon emissions is both futile and unnecessary,” reports the New York Times, “and that money is better spent adapting to what he says will be moderately higher temperatures.” A darling of the Republican-heavy committee audience, Christy surely comes out on top in many of their brackets.

Lots of talk about Dr. Judith Curry this year, this Prime Time player could go all the way. Her recent record is marked by consistent performances: like Christy, Curry agrees climate change is happening and humans account for some of it, but also denies climate models to the low post, claiming they overestimate the impact of global warming. In a previous tournament appearance, she testified that the Paris Climate Agreement would be have little to no impact on climate change. In a signature Curry three pointer, she has accused the IPCC of “corruption.” Curry told the journal Nature in an interview: “I’m not going to just spout off and endorse the IPCC because I think I don’t have confidence in the process.”

Curry’s fans have flocked to her blog, which has been a hodgepodge of climate change ideas from various authors. On it, she seems ready to tear up the pea patch and bring her skepticism to the Final Four–as she said in a recent post, “this should be high theater for climate geeks. Get your popcorn ready.”

Dr. Roger Pielke Jr. got this far in the tournament by accepting human contribution to climate change, but arguing that “it will be many decades, perhaps longer, before the signal of human-caused climate change can be detected in the statistics of hurricanes (and to the extent that statistical properties are similar, in floods, tornadoes, drought).” His opponents have accused him of cherry-picking hurricane records and other data to make his points. To his credit, Pielke has also recently argued for the AAAS supporting the political engagement of scientists after the upcoming March for Science.

Though he is listed with the Environmental Studies Department, Pielke is currently on leave “through Spring 2021 to initiate and run the CU Center for Sports Governance.” He is not a trained climatologist or environmental scientist, but a political scientist who is known more for a different sport, namely sports writing. His bio reads: “In 2011 he began to write and research on the governance of sports organizations, including FIFA and the NCAA,” with such recent pieces as Can anti-doping bodies maintain their scientific integrity? The answer is troubling, Get ready for the coming wave of technologically enhanced athletes, and Science will never settle the question of sex and gender in sport. Keep a lookout for a surprise 3-seed upset!

Dr. Michael Mann has been the Cinderella story of the tournament. As a renowned climatologist, co-founder of RealClimate.org, and staunch advocate for the consensus of climate change, it is surprising that Mann has made it to the Final Four. Some say it was because the Democrats get to put one witness on the panel–we say it was his tenacious defense and a little bit of luck.

Mann is lead author on a recent study published yesterday in Nature’s Scientific Reports that links warming temperatures to changes in the Northern Hemisphere’s jet stream, which in turn prolongs the effects of severe weather events. By providing a specific mechanism for how anthropogenic carbon actually affects climate and weather, this new study “adds to the weight of evidence for a human influence on the occurrence of devastating events such as the 2003 European heat wave, the 2010 Pakistan flood and Russian heat wave, the 2011 Texas heat wave and recent floods in Europe.”

Mann called tomorrow’s session “a fake debate,” and the bookies tend to agree: his chances of winning are about the same as the West Antarctic ice shelf surviving global warming. To win, he’d really have to be scoring on the wrong basket. Plus, Mann is known more for his hockey skills than anything else. But we like rooting for the underdog.

Additional writing by Will Toubman.