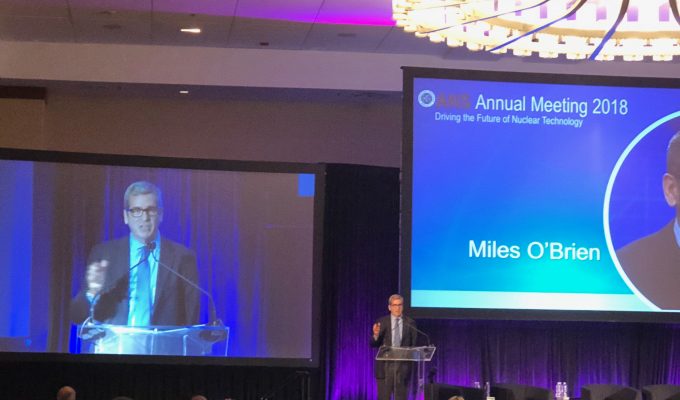 This week, Miles was honored with the inaugural Darlene Schmidt Science News Award, presented by the American Nuclear Society (ANS).

Here’s what the ANS had to say:

“O’Brien was nominated based on a 2017 PBS segment on the advances made in nuclear energy systems since the Fukushima accident. He spent two days filming at the Idaho National Laboratory site in 2015, interviewing technical experts to tell the story of advanced nuclear innovation. O’Brien took time to research and thoroughly understand why the Fukushima reactor accident occurred, how the nuclear industry responded, and why nuclear energy remains an essential component of our nation’s future energy systems. The resulting film and series was titled, ‘The Nuclear Option’ which aired on PBS NOVA and The PBS NewsHour in January 2017.

‘Miles sets the standard for how scientific topics, specifically nuclear topics, should be covered by the media,’ said ANS Communications Committee Chair Laura Hermann. ‘He has a reputation for avoiding sensationalism in favor of facts, substance and balance, which is what ANS encourages among journalists who cover nuclear and other scientific topics.’”

“This is a distinct honor as it comes from the experts,” Miles said when he was accepting the award. “My team and I are always focused on finding ways to simplify and communicate complex concepts with accuracy to a mass audience, especially on subjects where there is widespread misunderstanding–like nuclear power. It’s a tough needle to thread, but an award like this proves the extra effort is well worth it.”

Our award-winning film, The Nuclear Option, is available for (limited) streaming on the PBS NOVA site and for purchase on iTunes and DVD. You can also watch it on YouTube below:

You can watch our PBS NewsHour segments on nuclear innovation below: