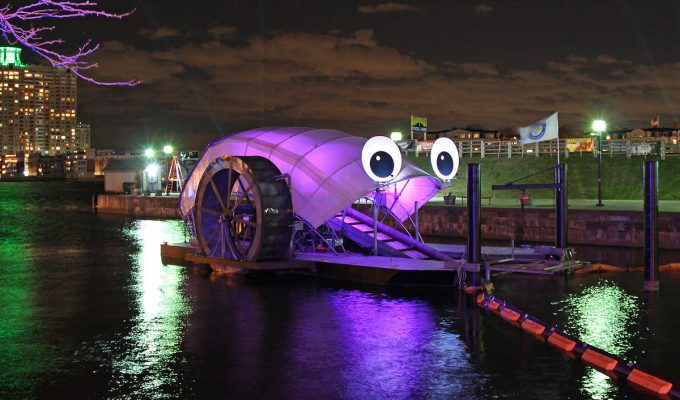 Baltimore’s harbor is infamously polluted. One organization has a number of initiatives to try and clean up the waters and make them swimmable by 2020.

Their most successful project features a prankster water wheel that collects garbage. Connecting with people on environmental issues may be as easy as making them laugh.

A harbor in need of a makeover

Home to the National Aquarium, various art and science museums, and a bustling nightlife, the waterfront of the Baltimore harbor has long been a massive tourism attraction for the Chesapeake Bay region.

WATCH: Miles visits the National Aquarium, which is moving its dolphins to a seaside sanctuary.

The harbor itself? Not so much. Plastic, tires, and other trash routinely floats out into the harbor through the storm sewers. The Healthy Harbor Initiative for the Waterfront Partnership of Baltimore has given the harbor a failing water quality grade for the several years in a row.

Addressing the pollution from many angles

This same organization wants to clean up the waters, however, and make them swimmable by 2020. To achieve this, the Healthy Harbor Initiative has started several projects meant to improve the environmental quality of the waters while bringing communities together.

The team has created floating wetland islands around the harbor, which not only filter the water but provide habitats for ducks, herons, turtles, and other species.

There’s an oyster partnership, where community members help cultivate juvenile oysters off of their docks.

There are other projects too, but nothing has captured the public’s imagination like Mr. Trash Wheel.

Who is Mr. Trash Wheel and why is he famous?

Mr. Trash Wheel is a googly-eyed, trash-skimming water wheel installed at the bottom of Jones Falls watershed, which empties into the Baltimore harbor.

Invented by Baltimore local John Kellett, Mr. Trash Wheel was further developed and installed by the Healthy Harbor Initiative. The organization also made a decision that would prove crucial: give the construction a personality, creating a fun, mischievous character that focused first and foremost on entertaining the public.

“That was a big ‘aha’ moment—most organizations are not comfortable being off message,” Adam Lindquist, director of the Healthy Harbor Initiative, recounted at the 2018 Ocean Symposium at Duke University.

Lindquist said the team spends about 70% of their messaging time cultivating the image of Mr. Trash Wheel and interacting with the community. Here’s an example of a recent fun tweet from everyone’s favorite trash collector:

I finally figured out a way to make Infinity War even better. pic.twitter.com/CHJnYGsV4m

Mr. Trash Wheel has become a huge local celebrity: there are t-shirts, Halloween costumes, and even local beers honoring him.

It is precisely this irreverent playfulness, Lindquist contends, that led to Mr. Trash Wheel becoming a cultural phenomenon–first locally, and then globally. Lindquist says he often talks to people who had never even thought of recycling, but do now after following Mr. Trash Wheel’s exploits.

That’s not to say Mr. Trash Wheel is all talk. Since May 2014, he has collected over 1.5 million pounds of trash. “We’ve picked up 16 dumpsters of trash during a single rainstorm,” said Lindquist.

The future of Mr. Trash Wheel

Mr. Trash Wheel and growing community around him have caught the eye of the city council, which this month banned all styrofoam packaging for its food establishments.

The project has been so successful that another entity has joined the fight to clean up the Baltimore harbor: Professor Trash Wheel. The two wheels will meet each other for the first time at the 3rd annual Baltimore Flotilla in June, another Healthy Harbor Initiative event.

Beyond Baltimore, Honolulu and other cities around the country have reached out to Lindquist’s team to figure out how to set up similar trash collecting systems in their communities, as well as how to market them effectively.

Perhaps soon, you could see a Mr. Trash Wheel compatriot in your local waterways. Are you thinking of names yet?