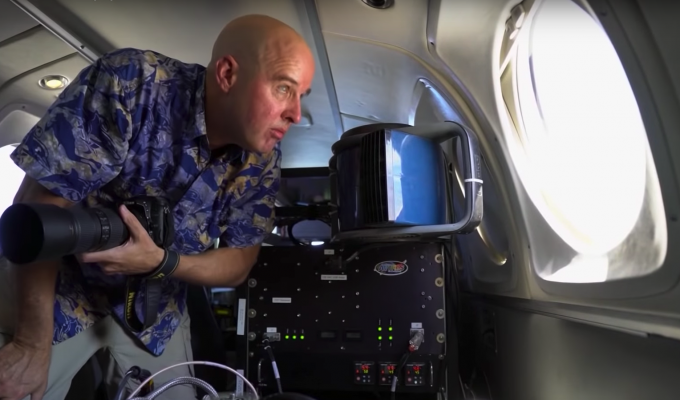 Miles reports from the atmosphere above Southern California, where NASA engineers leverage state-of-the-art technology to measure methane. Released through oil and gas production, livestock emissions, and organic waste, methane is about 85 times more potent at trapping heat than carbon dioxide. California wants to identify specific methane leaks so it can plug them.

Originally aired on the PBS NewsHour. For more reporting on methane, check out these two Miles To Go podcasts. More to come–the climate impact of methane is not going away!

We heard in the last segment a little about natural gas produced in the U.S.

It turns out it is a big factor in the overall growth of energy production in this country over the past decade.

But producing and transporting that gas releases methane, a potent greenhouse gas that’s gotten a lot less attention when it comes to climate change.

It’s part of our weekly segment on the Leading Edge of science, medicine and technology.

This is Honor Rancho. This is about 10 clicks north or so.

It’s time for a preflight briefing at Burbank Airport.

We’re going to get plenty of data over the — over the site.

I’m flying with a team from NASA’s Jet Propulsion Laboratory. A place that specializes in exploring distant planets today is focused on our own.

They’re taking flight over Southern California, hunting one of the most potent greenhouse gases of all, methane. It accounts for one-fifth of the global warming we are experiencing now.

You can’t manage what you don’t measure.

He and technologist Andrew Thorpe are using a state-of-the-art infrared imaging spectrometer to find plumes of methane invisible to the human eye. Nationally, the EPA estimates about one-third of methane emissions come from oil and gas production, another third from the methane created by the belches and manure of livestock, and about 16 percent from organic waste dumped in landfills.

So, today, we are flying over fertile methane territory. There are 200,000 oil and gas wells, almost 2,000 dairy farms and hundreds of landfills in California.

Think of it as a baseline medical exam. No one has done the first methane assessment of the state of California, and maybe this ought to happen every year.

California is funding the flights to find and stop methane leaks. There is good reason to focus on methane in the fight against climate change. Lasting only a decade or so, it is shorter-lived than carbon dioxide, which persists for a century or more.

But during its lifespan, methane is about 85 times more potent at trapping heat than carbon dioxide.

What the state is trying to do is to get an initial assessment of how many strong methane sources are there in the state, where they’re located, how much are they emitting?

In 2016, researchers from Harvard used satellite and ground observations to determine methane emissions steadily increased in the past decade, and they concluded the EPA is underestimating methane leaks from all sources by 30 to 50 percent.

More recently, the Environmental Defense Fund published a study in the journal “Science” concluding the EPA is underestimating methane leak in oil and gas production by about 60 percent.

The first step to plugging these methane leaks is pinpointing them. On flights like these, JPL is using the Airborne Visible/Infrared Imaging Spectrometer, or AVIRIS, to do just that. It can detect gases by analyzing the spectrum of light transmitted by the atmosphere.

The spectrum of methane is like a fingerprint. Like every other gas, methane absorbs a unique slice of the full spectrum coming from the sun.

This is the most active producing part of the state right now, is this county that we’re heading towards. So, when you add it all up, there are literally millions of potential emission sources in the area that we’re mapping.

The AVIRIS team routinely shares what it learns with those emitters, including the operators of the huge Sunshine Canyon landfill in Los Angeles.

On an earlier flight, the team saw a huge plume of methane billowing from areas where the topsoil had been stripped away in advance to make space for more dumping. So, the landfill changed its routine, keeping the topsoil in place until just before the trash is dumped, greatly reducing methane emissions.

AVIRIS was also deployed to capture images of a massive natural gas blowout. It happened at a Southern California gas company storage facility near Porter Ranch. It was captured on video using an infrared camera as well.

It began in October 2015 and lasted four months. Nearly 100,000 tons of methane were released, about 5 percent of the gas that SoCal delivers annually, the worst natural gas leak in U.S. history.

It was something that was disheartening for all of us.

Deanna Haines is director of gas engineering for SoCal. It is the largest gas distribution company in the United States, maintaining over 100,000 miles of gas mains.

It didn’t negate all the good that we have been doing over the last decades to mitigate methane, but it certainly — it didn’t feel great.

I met her at the training center they call Situation City. Here, they practice maintenance and repair techniques and test new technology. The tried-and-true method for finding leaks is the human nose, which can detect the sulfur smell that the company adds to the odorless methane, also called natural gas.

But they augment that with some technology, fixed sensors at strategic locations, a van that can detect even very tiny amounts of methane, infrared cameras to inspect pipes, and a drone outfitted with a small laser.

They say the priority is avoiding natural gas explosions, and it is not cost-effective to fix every leak.

There are some leaks that it’s been either very difficult to go after, it costs a lot of money to go after, but, more importantly, we need to prioritize safety first. When we find leaks, we need to fix them in a reasonable amount of time.

In the aircraft, AVIRIS has spotted methane leaks in SoCal pipelines that the company has repaired, proof there is the value to this type of survey.

But it is, after all, just a narrow snapshot of a global problem. So the team is proposing a similar instrument be launched into space. They think methane mitigation is a good place to start stemming greenhouse gasses.

CO2 emissions have to be addressed. But CO2 emissions involve economy-wide processes. They involve our power generation, our transportation, like the airplane we’re flying on right now. And those are going to require economy-wide shifts in technology.

And it’s happening, but it may take a long time. Methane in the meantime has potentially near-term climate benefits over the next few decades.

2014 was the planet’s warmest year on record.

During the Obama administration, regulators were enticed by that argument. The Department of Interior and the Environmental Protection Agency had imposed rules forcing gas and oil producers to detect and repair methane leaks.

With today’s executive action, I am taking historic steps to lift the restrictions on American energy.

But the Trump administration has tried to reverse all of that, facing pressure from industry, which insists the regulations impose too great a financial burden.

It’s just a little odd to me that a company would just say, oh, I don’t need even want to know how much of my product I’m losing.

Yes, it seems odd to me too. It’s like it’s nonintuitive. If you’re in any business, you want to keep your product intact. You don’t want to lose it.

Congress and the federal courts have offered contradictory votes and rulings on the Obama era rules. The net effect, much of the regulations remain in place, for now. But there is no scientific debate that reducing the amount of methane in the atmosphere can make a significant dent in greenhouse gases.

In the seemingly insurmountable fight against climate change, methane may be the low-hanging fruit.

For the “PBS NewsHour,” I’m Miles O’Brien in Burbank, California.