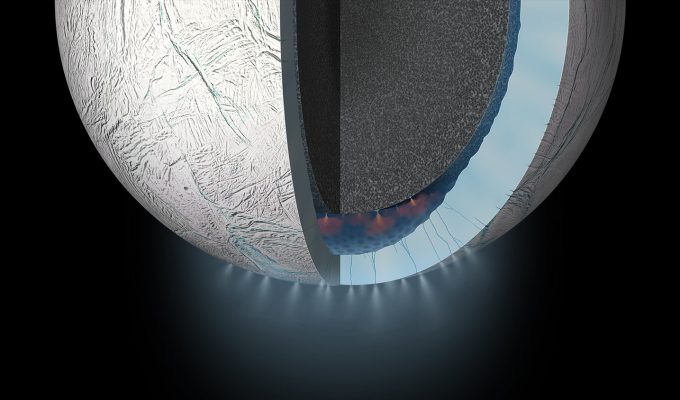 New research published today in the journal Science has added emphatically to the growing evidence for hydrothermal process on Saturn’s moon Enceladus, increasing the likelihood for another environment habitable to life in our own solar system.

Enceladus has a liquid ocean covered by ice, and Saturn’s “tidal tug and pull can perhaps crack the ice all the way from Enceladus’ surface down to the ocean,” says NASA astrobiologist Kevin Hand. Through these cracks, towering plumes of ocean water spew out like geysers.

Two years ago, it was announced that NASA’s Cassini spacecraft had found methane in a plume it had plunged through, as well as tiny grains of glassy rock surrounding the system. Both of these pointed to the possibility of hydrothermal activity, where the subsurface ocean interacts with the likely porous rocky interior at temperatures near boiling.

Now, data from NASA’s Cassini spacecraft collected by flying through one of these plumes in November of 2015 showed elevated levels of hydrogen gas. After ruling out other possible sources, the team writes that “the dominant source of [hydrogen gas] in the plume is most likely hydrothermal processing of rock.”

Hydrogen gas on Enceladus is likely created through a pair of processes as ocean water is cycled through the rock: one is oxygen being stripped from water by minerals such as iron in rock, another is the high temperature itself breaking apart organic matter that settles on the ocean floor.

Using the amount of hydrogen gas relative to other chemicals detected in the plume, the scientists infer that, although the water is more caustic than the oceans of Earth, there is enough hydrogen gas created to facilitate the production of methane, a reaction that releases an appreciable amount of energy that some form of life could exploit.

All of these conditions mimic seafloor hydrothermal vents on Earth, where scientists were surprised to find life thriving in the total darkness. Huge mineral chimneys churning out hot, caustic water were thought to be too extreme an environment for life to get a foothold, but scientists found a panoply of tube worms, shrimp, and other organisms perfectly adapted to these conditions.

“There’s increasing awareness in the scientific community that life may have originated on Earth at the bottom of the ocean, on the hydrothermal vents because there’s far more energy there, all the chemical elements of life are there and it’s a very stable quiet environment free from asteroid impacts or radiation from space,” says Rep. John Culberson (R-TX), who is chair of the subcommittee that determines funding for NASA.

Culberson is very excited by this news–it comes as validation for his years-long campaign to explore Europa, a moon of Jupiter that is very similar to Enceladus. Hydrothermal activity, Culberson says, is unlikely to be confined solely to Enceladus: “Undoubtedly, that’s occurring on Europa.” An exclusive, extended interview with Culberson on the subject from our PBS NewsHour segment this week can be viewed below:

This latest data was collected in less than two minutes of flying by Enceladus, at speeds several times that of a speeding bullet. The Cassini team must be ecstatic: their spacecraft, launched two decades ago, is still making groundbreaking discoveries. Sadly, Cassini is running out of fuel, so the team has decided to weave it in and out of Saturn’s rings on its way to burn up in the planet’s atmosphere in the fall.

Cassini will be missed. But the wonderful data it collected has helped pave the way for Culberson’s pet project, an orbiter and lander for the much closer Europa.

Culberson is unstoppably optimistic: “I have no doubt that the discovery in life on another world and in this case the best place to look is Europa,” he said. His optimism is infectious.