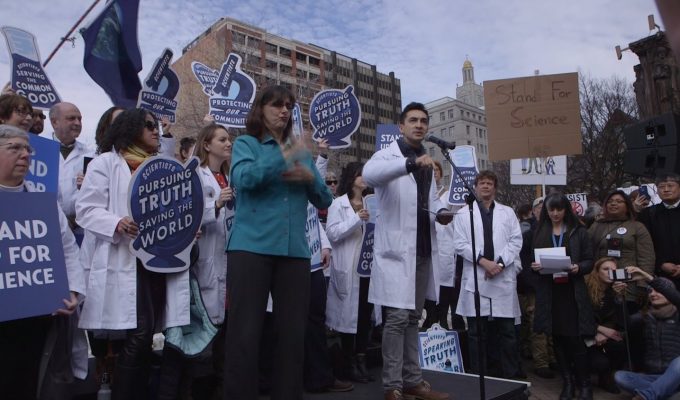 This past weekend, the March For Science drew hundreds of thousands of scientists and science supporters onto the streets in 600 locations on six continents. It was, by most accounts (including those of science historians), an unprecedented event. But big-picture speaking, how did it do?

“Pluses and deltas” is a popular retrospective exercise amongst grassroots organizers, and offers a constructive way to answer this question. It asks: where did we go right (pluses), and how can we improve (deltas)? Here are my top two pluses and deltas for the March For Science.

Plus #1: The March For Science mobilized the immobilizable. As a scientist-activist who has been organizing scientist-led campaigns and rallies under hashtags like #StandWithScience for several years, I know first hand how hard it can be to get introverted, politically-ambivalent scientists worked up — let alone out of their labs and into the streets. In that sense, last Saturday was incredible. “The march represented a sort of coming-out party for many scientists flexing a fledgling political muscle,” Vox’s Brian Resnick observed. In D.C. he met Charlotte Froese Fischer, an 87-year-old atomic physicist who “until today…had never attended a political rally of any kind, let alone one for science.” At March For Science rallies at Harvard and MIT, I was delighted to see not just the usual suspects, but hundreds of mildly uncomfortable academics who had clearly never waved a sign or chanted in public before (I’ve been there). For many, this was a gateway into political engagement and activism.

Plus #2: The March For Science forced many scientists — not to mention the public, press, and politicians — to grapple with the role of science in society and the relationship between science and politics. As scientists with little or no past experience in political engagement wrestled for the first time with the fear of politicizing science, the march went from officially apolitical to political-but-non-partisan. As my advisor, Harvard Professor Naomi Oreskes, points out, research indicates that this fear is just that — a fear, unsubstantiated by historical evidence and peer-reviewed experiments, which show that scientists’ credibility is robust to science-advocacy. Indeed, scientists appear to have largely brought this fear upon themselves by conflating the idea of science in the abstract (the scientific method) with the application of science in the real world. In so doing, we handed journalists an irresistible ‘controversy’ over (mostly) semantics. And yet, with time, the march’s communications improved, and on the day, its global message was unambiguous: science serves society.

The march’s successes have helped normalize science-activism, injecting momentum and political potential into this new “science voter” bloc. Capitalizing on this momentum, however, will take work. For me, the deltas of the March For Science involve better embracing the sociopolitical realities in which science operates.

Delta #1: Having fumbled with the largely mythical fear of politicizing science, scientists must now truly move on if we are to become more effective campaigners and messengers. This means not just rallying in the abstract about the importance of science (“I love science!”), but speaking out on specific issues where science is being trampled on by politicians and policymakers. Climate change epitomizes this. At its best, the March For Science offered a profound statement of our values as scientists, which is a crucial start. But a truly effective narrative for social change also requires a story of “now”: a moment of crisis that challenges those values. The shortcoming of the March For Science’s official platform to explicitly articulate President Trump’s war on science (and, accordingly, on all of us humans) as part of the target of our protest leaves room for improvement.

Delta #2: Scientist-activists must embrace the intersectionality of science with politics, race, class, gender, corporatism, and so on. Here, I am referring not to diversity within academia, as exceptionally important and related as it is, but to how the science movement (comprising both scientists and science lovers) sees its place in the world. Unlike the scientific method, the science movement does not — and should never — exist in a bubble. We should embrace opportunities to connect science to real-world issues; both in what we say and who we collaborate with. In my own field of energy and climate change, for example, we should talk about how last year alone, the solar industry hired more people than the coal industry employs in its entirety. We should talk about how fossil fuel pollution and climate change disproportionately harm and kill minorities and indigenous groups. In short, we should stand in solidarity with those who our science strives to protect. Not only is this the right thing to do, it is politically effective; by building narratives of shared values, we can broaden our coalition and win the political story wars. The movement for a just and stable low-carbon future doesn’t stop at the laboratory’s edge, but for too many scientists, it still does.

At Saturday’s march, amidst the geeky signs and nerdy chants, Reverend Lennox Yearwood Jr. — a leading figure in the climate movement and a VIP guest of the March For Science — was, he reports, a victim in broad daylight of a racist assault by D.C. police officers. “The deeply disappointing truth of this Earth Day case of racial profiling,” Yearwood observes, “was that none of my fellow science marchers stopped or took issue with what was happening. They didn’t question or pause to witness in a way that one would for a member of one’s community.” Of course, the inactions of those present do not represent all marchers or scientists. But in that random sampling — at that moment on that crosswalk — solidarity was absent.

This coming Saturday, April 29, the People’s Climate March offers an immediate opportunity for scientists and science supporters alike to build on the pluses of the March For Science, and to work on our collective deltas. In D.C. and 250 sister marches nationwide, hundreds of thousands of us will stand up for climate, jobs, and justice. It is an important first test. Can we find the moral courage to not only celebrate values like evidence-based policy, but put them into action on real-world issues like climate change? Are we willing to step out of our comfort zones to call out the Trump administration’s anti-science pandering to fossil fuel interests? Is this a moment, or a movement?

Dr. Geoffrey Supran is a Post Doctoral researcher in the Institute for Data, Systems, and Society at MIT and in the Department of History of Science at Harvard University. He has a PhD in Materials Science & Engineering from MIT. He has co-led several campaigns to mobilize scientists to engage in climate advocacy, including the fossil fuel divestment campaign at MIT, an open letter from academics urging Donald Trump to take climate action, and the #StandUpForScience rallies in San Francisco and Boston, which were the first major scientist protests against the Trump administration. He spoke at the Harvard March For Science.

Supran was featured in a MOBProd-produced NewsHour segment about science and the new administration: