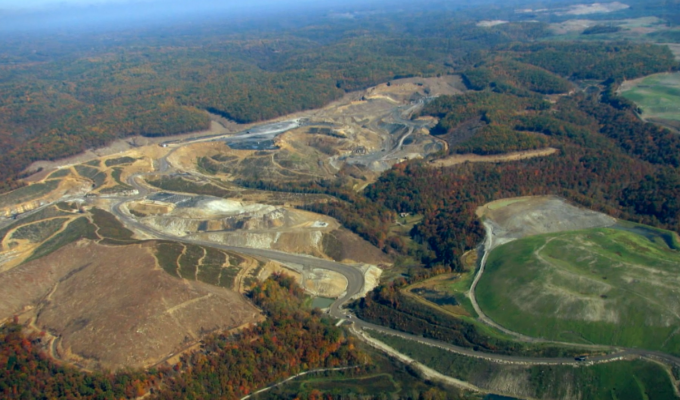 The industry calls it surface mining; environmentalists call it mountaintop removal mining. No matter how you slice it, though, the process slices off acres of Appalachian summits to get to the coal underneath. An estimated 10% of the region has been flattened.

Coal has always been the predominant source of energy for the United States, but cheap and abundant natural gas is overtaking that mantle. These surface mines are going to lie fallow, deep scars in the world’s oldest mountains. Many of them are thousands of acres in size. What should be done with them?

This is the question the Office of Surface Mining Reclamation and Enforcement, a division of the U.S. Department of the Interior, has been asking for a long time. In 1977, the Surface Mining Control and Reclamation Act was passed, establishing the office and tasking it with, among other things, promoting projects that repurpose these altered landscapes.

These efforts have been varied: from Walmarts to elk preserves, golf courses to solar farms. Notice that much of those uses are business-oriented. This is not a coincidence, as the land left behind after a mountaintop removal mining operation is difficult to return to an Appalachian-style ecosystem.

“One of the biggest problems for old mountaintop mines is that there’s no soil left,” said Dr. Emily Bernhardt, Professor of Biogeochemistry at Duke University. “It’s a stressful environment for plants to grow in. Most of what we’re seeing growing on top of these mines are invasive grasses. One of the best woody plants that grows there is Russian Olive trees. And so, when you go out into the reclaimed mines, they do not look like Appalachian forest. They look a little bit like Asian steppe.” No wonder the industry likes to highlight successful reclamation efforts in Mongolia.

One potential way to reclaim these areas to create a more natural landscape is through biofuel production. “Growing biofuel species that are capable of thriving on marginal lands with reduced nutrient input needs and maintenance (such as plowing) can be a sustainable option for landowners,” Steffany Scagline told me over email. “These reclaimed lands are not recommended for use of food crops due to the potential for heavy metal contamination, therefore there would be no competition for food versus fuel.”

When she was a graduate student in West Virginia University’s Division of Plant and Soil Science, Scagline worked on a project with her advisor, Dr. Jeff Skousen, which was “focused on finding renewable fuels that could be grown on lands not used for food production and also that would require less inputs than current biofuel crops like corn grain.”

In 2010, the team planted two species of tall grasses on roughly 24 acres of a reclaimed surface mine in Alton, WV. One of the species is the indigenous switchgrass, a chest-high variety with explosions of colorful seed heads at the tips. The other is Giant Miscanthus, a towering Asian variety of grass with blades as thick corn husks. Miscanthus has been shown to produce more biofuel per acre with less maintenance than corn, and switchgrass is no slouch either.

As Scagline reported in a paper in 2015, the grasses grew well, even considering the depleted soil of the reclaimed surface mine. “Using reclaimed mine land for biofuel use is not be an easy task,” she concedes “It requires a lot of forethought and planning before the reclamation process begins.” However, it could be worth the effort. Scagline finished her Master’s thesis on the project last year, but is still working with Dr. Skousen and others on finalizing and reporting the data–she estimates that the grasses could produce roughly 2,000 liters of biofuel per acre, per season.

There’s a kind of poetry to reclaiming these desolate plateaus with biofuel crops: the coal mined from that ground was itself once prehistoric plants.