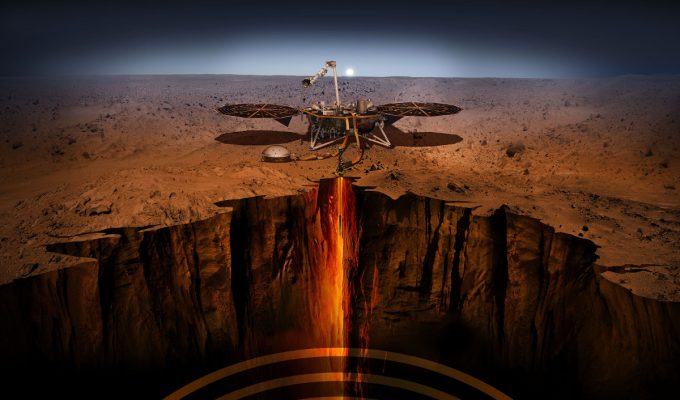 Here’s a look at the most interesting happenings in science, with stories you don’t want to miss.

Landing on the Red Planet to study marsquakes

Mars is hard. The odds of a safe landing on the surface are less than 50-50. But last Monday, the team at NASA/CalTech’s Jet Propulsion Laboratory once again made it look easy as the InSight lander successfully touched down on the rusty regolith of the Red Planet.

A decade of hard work and planning, capped by a 300 million mile cruise for more than six months, was distilled into “seven minutes of terror.” The craft plowed through the Martian atmosphere following dozens of pre-programmed steps–each of which must happen with Swiss-clock precision. Guiding a Mars lander from Earth is not a possibility due to the 8 minute-long delay in radio signals.

Thankfully, everything went off without a hitch and InSight is now safe on the surface of the Red Planet. The robot geologist will spend the next two to three months unfurling its instruments for its two year probe of Mars.

And in this case, “probe” may be more apt a term than usual; InSight’s mission is to investigate the innards of Mars. We know a lot about all the visible parts of Mars, like its surface and its atmosphere, but the inside of the planet remains mostly a mystery. To crack the crust, InSight is outfitted with a suite of instruments, including a seismometer, that will help scientists listen for marsquakes and drill down almost 16 feet. Insight’s readings will help scientists divine the makeup of Mars, how it came to be, and, by inference, how Earth has evolved over the past 4.5 billion years.

To learn more, watch my special PBS NewsHour report on the topic:

OSIRIS-REx on the doorstep of asteroid Bennu

Mars was not the only object in the exploration spotlight this week: the asteroid Bennu also got a visit from a NASA probe called OSIRIS-REx.

OSIRIS-REx stands for Origins, Spectral Interpretation, Resource Identification, Security, Regolith Explorer–and it offers further proof NASA’s beloved acronyms have gotten a little out of hand. But the name does encapsulate the dimensions of the mission.

The main event: a daring touch-and-go sampling of the asteroid, where the spacecraft will not fully land but rather dip down and sample the rock, pogo-stick style. This sample will then be stored on board OSIRIS-REx and will eventually–hopefully!–make its way back to Earth in 2023. Scientists will then work to characterize what asteroids like Bennu are made of, especially searching for water and the building blocks of life (like amino acids and sugars) in the sample.

But, that all won’t happen for a while–the sampling effort itself will only happen in about a year. In the meantime, the team will try to better understand the subtle movements of the asteroid, as Bennu does have a much-better-than-winning-the-Lotto chance of hitting Earth–to be exact, a 1 in 2,700 chance of impact in the 22nd century (see “Security”). If it did, it would cause a regional natural disaster.

For more on this, check out our PBS NewsHour report and in-depth podcast on OSIRIS-REx with key players running the mission:

Europa is our best bet for finding aliens

Meanwhile, I suspect there is a lame duck Congressman from the Houston area by the name of John Culberson who is longing for more insight on another tantalizing solar system mystery: the Jovian moon Europa. Before he was handed his hat last month, he made it the law of the land that NASA fly a probe to Europa. And so it is writ large.

Bennu might help answer perhaps the greatest scientific question of all–is there life beyond Earth?–but Europa might hold proof positive. While the imagination often conjures up super-intelligent beings from other galaxies, the science is more in favor of primitive aliens much closer to home.

Everywhere on Earth where there is liquid water, intrepid scientists have found life–from the immense, icy pressures of the ocean depths to the caustic geysers of Yellowstone. So, the thinking goes that other worlds in the Solar System that are known to have liquid water could, at least hypothetically, harbor life.

The most promising of these is Europa, a moon of Jupiter. From all indications, Europa seems to have a vast ocean trapped underneath miles of icy crust. What mysteries lie beneath that surface? To find out, listen to this recent episode of my podcast, Miles To Go, featuring Kevin Peter Hand, Deputy Project Scientist of NASA’s Europa Mission.

Robots may not replace us, but work alongside us

Joblessness and massive societal shifts are what often come to mind when you hear the word “robot.” And, although tech evangelists and science fiction writers have long warned that our robot overlords are just a few years away from awakening, that vision is not quite panning out yet.

In fact, while we were putting together our piece for the PBS NewsHour’s special “Future of Work” week, I was struck by what AI pioneer, the late Marvin Minsky told me once: he said, “There’s still no machine that can solve everyday commonsensical problems.”

Minsky told me that back in 2010–but it still rings true today. The difference is we now have better sensors to collect more data and powerful machine learning algorithms to make sense of that data. Though they still haven’t brought us general purpose AI in nimble robot bodies, these advances do provide new ways to build collaborative robots–or cobots, for short.

Cobots make sense because there’s still many things either robots can’t quite do, like dexterously pick up packages in an Amazon warehouse, or are instances where we would feel uncomfortable ceding control to a machine, like performing an entire surgery. We discussed those and other examples in my PBS NewsHour segment this week.

On November 25th, the eve of the preeminent annual international summit on human gene editing, Chinese scientist He Jiankui made a stunning announcement: he had edited embryos that successfully birthed twin sisters. At the conference, He added that a third child is currently being carried to term.

Working in secret and seemingly without the support of his hospital and research university, He also may not have fully disclosed what he planned to do to the parents he recruited. The work has received almost unanimous disapproval–there has been a widespread moratorium on editing embryos. China last week abruptly suspended the rogue doctor’s work–and he now seems to be missing.

He claimed to have used the powerful CRISPR-Cas9 gene editing system to mutate the CCR5 gene, conferring resistance to the HIV virus. STAT News has a good breakdown if you’re interested in the details.

The main issue here is that there’s a big difference between editing somatic cells like muscles or neurons and editing germline cells like sperm and eggs. If you edit a somatic cell, the changes don’t get passed on to future generations. However, editing an embryo ensures that every cell in the future person carries those edits, including the sex cells. This means that these children will pass down these edits if they have children of their own. It’s kind of like opening Pandora’s box–once it’s done, you can’t really go back…

We covered the first somatic cell editing with CRISPR back in 2016 but, honestly, I thought it was going to be much longer until germline editing happened.