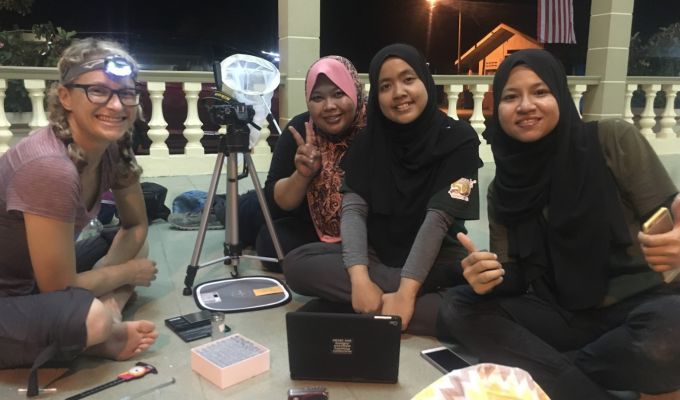 Ed. Note: Elizabeth Scordato is an evolutionary biologist at California State Polytechnic University, Pomona, studying how environmental variation influences the evolution of bird signaling and the formation of new species.

From April to June of this year, Liz is conducting field research on the Pacific swallow in Malaysia, Fiji, and Japan, and will be making a special exception to her usual “no email during field seasons” rule to update this space on how her Pacific swallow fieldwork is going. To see her past posts, click here.

Last we left our intrepid biologist, she had just finished a long–and successful!–first night of catching Pacific swallows under a Malaysian bridge with her colleagues.

One of the most important components of my international fieldwork is building collaborations with local scientists. Because swallows live in close quarters with people, catching them sometimes requires a full-on PR campaign: we need to convince homeowners to let us into their barns to catch birds, or explain to a curious crowd why we are crawling around under a bridge. Working with local scientists lends legitimacy to our work and ensures that we don’t have any miscommunications. It also allows us to share our research with people from different cultures and areas of expertise.

Thus far our collaborators in Malaysia have been terrific. In Western Malaysia we’re working with Dr. Farah Mohd-Taib, a biologist at Universiti Kebangsaan Malaysia (UKM). Dr. Farah (as her students call her) did her PhD comparing bird diversity in pristine vs. disturbed habitats. As part of the wildlife research group at UKM, she now works on a variety of projects, from jungle biodiversity surveys to pathogen transmission in rodents. Dr. Farah assigned three of her students to help us catch Pacific swallows.

I’m not sure the students knew what they were getting in to when they agreed to work with us. All three have plenty of field experience: Asmalia is doing her Ph.D. on the bacterial disease leptospirosis in small mammals, Nabila just finished a Masters on bird diversity surveys, and Wardah is finishing her undergraduate thesis on bird diversity in mangrove forests.

However, catching swallows is different from catching other birds, and requires patience, late nights, and getting very muddy. Fortunately, the students proved more than up to the task.

After scouting birds along the Rembau river, it was time to get serious about netting. Our time was limited, and we needed to catch at least 10 swallows in one night. We had two potential sites, the bridge and the boat jetty.

We waited until nightfall and headed off to the bridge. We had a group of six: Amanda, Wardah, Nabila, Asmalia, Asmalia’s husband, Mohiddin, and me.

The key to night netting is to be quiet and efficient. If we wake up the birds, they are very hard to catch. We would therefore have to net in near silence, using only dim red lights.

We coordinated the plan as we got the nets ready. The nests were under different parts of the bridge, and we would have to do some crawling through the sand and mud to get to them.

Amanda would go first, using the red light to find pairs of sleeping birds. Then Mohiddin and I would carefully lift the net up in front of the nest. Amanda would use a long pole to gently poke the birds awake so they would fly into the net. Wardah would be ready to chase any birds that escaped back towards the net. Asmalia would hold on to the birds we caught and make sure we kept the pairs together. Nabila would help remove birds from the net and film everything on her GoPro. Everyone would keep an eye out for crocodiles.

We turned out to be a dream team, and everyone executed their jobs perfectly. We only let one bird escape and ended up with eight swallows. That’s a pretty good haul.

We drove back to the jetty so we could process the birds under a well-lit pavilion. “Processing” is our shorthand for collecting data. For us, that means measurements, photographs, feather samples, blood samples, and parasite counts.

It’s easy to forget a measurement or mislabel a tube when you’re working fast and it’s late at night. But here, too, the students were awesome. They labeled tubes and feather envelopes, entered data, and took photos. Wardah even collected her first Pacific swallow blood samples. Having the extra eyes and hands made everything run smoothly.

After we released our bridge birds, we quickly scooped up more swallows from nests around the jetty, bringing our total to fifteen birds from this area–exactly the sample size we were looking for. It was 1:30am by the time we finished. We were covered in sweat, sand, and cobwebs, but so happy.

On our way home, the students declared that we needed drinks and snacks to celebrate our success. We pulled into a 24-hour café, ordered roti canai and juice, and took many triumphant selfies.

It was nearly 4am by the time Amanda and I were finally in bed. It had been a long, exhausting night, but entirely worth it. We had all the samples we needed from Western Malaysia, and it was time to move on to Borneo.

Before leaving, we had dinner at Dr. Farah’s house. We reviewed our work and made plans for the future. Although our visit has laid a foundation, there is still so much we don’t know about Pacific swallows: their basic breeding biology, diet, and how they are affected by habitat change. We are hoping to have a Malaysian Masters student pursue these questions.

As we discussed ideas around a dinner table crowded with noodles and curries, pausing our conversation to sample durian, the local, horrifically unpleasant fruit, I remembered why I love these international collaborations. Of course the research questions are exciting. But working abroad is also an important reminder that scientific inquiry transcends cultural barriers and builds bridges out of shared interests. Research has allowed me to work with many different people from very different cultures. The biggest lesson I’ve learned is that we aren’t that different at all.