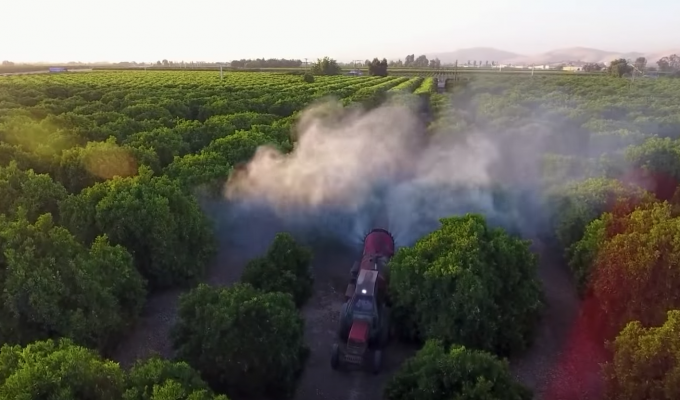 Chlorpyrifos is one of the world’s most widely-used agricultural pesticides. Studies have linked exposure to the chemical to neurological issues in children, yet the EPA has–so far–decided not to ban the use of chlorpyrifos. Miles explores the issue for the PBS NewsHour.

It’s not well known to the general public yet that the Environmental Protection Agency under President Trump wants to change which scientific studies can be used by the federal government to regulate industry.

The administration and business voices say studies should be used only if all of the data is publicly available and transparent. But many scientists and researchers say doing so would violate privacy protections for patients in studies.

This issue is now playing out in a long-running battle over whether the ban pesticides that harm babies and children.

Miles O’Brien looks at the science and the debate behind it all.

It’s part of our weekly series on the Leading Edge of science, medicine and technology.

When Fidelia Morales moved into her dream home nestled among the orange groves in California’s Central Valley 12 years ago, she didn’t know much about agriculture.

It happens on the calm margins of the day. When the when lays down, growers gear up to spray their crops with pesticides.

Look at the distance between the machine and our yard. It’s impossible to keep the pesticides off my property.

Sometimes, at night, we have the air conditioning on and we can still smell the pesticides they’re praying throughout the entire house.

She wonders what the chemicals may be doing to her children, especially her youngest son, the only one born here.

He can’t sit in one place. We have received many complaints about him from his teachers, who say he needs to focus.

While it is hard to make a direct link, those are textbooks symptoms of exposure to chemicals known as organophosphates. The most widely used variety is chlorpyrifos, manufactured by DowDuPont.

After decades of research reviews and debate, the Environmental Protection Agency was on the cusp of banning all use of chlorpyrifos in November of 2016. But in March of 2017, then EPA administrator Scott Pruitt delayed a decision on the ban by five years, saying American farms that rely on the insecticide needed regulatory certainty.

DowDuPont called it the right decision for farmers. And yet, on August 9, a panel of federal judges ruled the EPA had no justification to allow continued use of chlorpyrifos in the face of scientific evidence that its residue on food causes neurodevelopmental damage to children.

Chlorpyrifos and other organophosphates are neurotoxins, a poison that attacks the nervous system.

It causes a huge excitatory burst in the nervous system.

Robert Sapolsky is a professor of neuroscience at Stanford University. The burst of nerve firing can be so severe, it works the neurons to death.

The body’s response? The nervous system tries to repair itself by growing new connections to patch the damaged circuit.

And one of the things that sometimes happens is, the wiring goes sort of haywire, and a neuron will wind up coming back and stimulating itself, so that every time it fires, it stimulates itself, and it fires and fires.

And what you have now set up, with a positive feedback loop like this, is chronic seizure disorder.

First introduced as an insecticide in 1965, chlorpyrifos was sold to consumers for home and garden use under various brand names, including Raid.

It really kills them dead.

It was widely used, even though scientists had published evidence that exposure to organophosphates causes permanent brain damage in rodents.

So what were the consequences for humans exposed to this neurotoxin?

We knew we had a chemical that was worthy of taking a look at if we were concerned about its potential adverse effects.

Virginia Rauh is an epidemiologist at the Columbia University Mailman School of Public Health. For 20 years now, she has followed 750 mothers and their children in the Washington Heights section of Manhattan.

Pregnant mothers in her study wore a backpack with a pump designed to gather air samples as they went about their daily routine. Rauh’s team found organophosphates in 99 percent of the air samples they gathered and 70 percent of the blood samples of the children.

MRIs of the brains of exposed subjects reveal enlargement in some areas and abnormally thin cortices, the outermost layer of nerve cells in the brain, crucial for cognitive functions such as perception, language, memory, and consciousness.

I think, in reality, there is no safe level. It depends upon the level of risk that we tolerate as a society. But to damage even to the extent of several I.Q. points or some very tiny attentional issues, in my mind, is not acceptable, if we know that it is associated with an exposure.

The Food Quality Protection Act says exposure to a pesticide must be safe for infants and children if it is going to be used on food.

With evidence mounting that chlorpyrifos posed a human health hazard, the chemical industry struck a deal with the EPA in 2002 to stop selling the pesticide for home use. Raid and other consumer products were reformulated, and some agricultural uses were curtailed.

But, today, chlorpyrifos remains a favorite among farmers.

When we met, Bob Blakely was vice president at California Citrus Mutual, which represents growers.

And the studies that are being referenced to buy a lot of those who are — who are opposed to this — this chemical have not been replicated and they have been not been substantiated by the rest of the scientific community, nor they have been duplicated in other countries.

The EPA says the Columbia data remains inaccessible and has hindered the agency’s ongoing process to fully evaluate the pesticide.

Dow says it remains confident that authorized uses of chlorpyrifos products as directed offer wide margins of protection for human health and safety. The company has funded several studies that support that conclusion.

Robert Sapolsky and a team of neuroscientists at Stanford pored through many of these papers.

Freshman science majors are not supposed to make mistakes like these. The science was basically empty.

And he says every time there was a mistake — and there were dozens of them — it favored the industry position that organophosphates, used properly, don’t harm humans.

For literature as a whole as lousy as the subset of these papers that I looked at, this really does bring into question lots of things, most basically, whether Dow has a leg to stand on saying this stuff has been scientifically shown to be safe.

EPA scientists agree. But in the Trump administration, their conclusions are frequently overruled by industry pressure.

Miriam Rotkin-Ellman senior scientist with the Natural Resources Defense Council, which is suing the EPA, hoping to force the agency to follow its own rules and take its own scientific advice.

when we have the evidence right in front of us that an exposure that’s widespread in the American population could be or is increasing the risk of those learning disabilities, and we are refusing to take action on that, it’s terrifying.

Especially so for Fidelia Morales and her family, surrounded by citrus and pesticides in California.

If our children are exposed to chlorpyrifos, they are not going to have a future. Together, as a community, we’re fighting for them to stop and to prohibit the use of chlorpyrifos here in this county.

I think that they don’t care, because, if they did care, they would try to stop this without us asking.

And California’s EPA has come to the same scientific conclusions as their federal counterparts. That could lead to a statewide ban there.

Meanwhile, the federal court has ordered the EPA to enact a ban on chlorpyrifos nationwide within 60 days. The agency can appeal, but says it is still reviewing the decision.