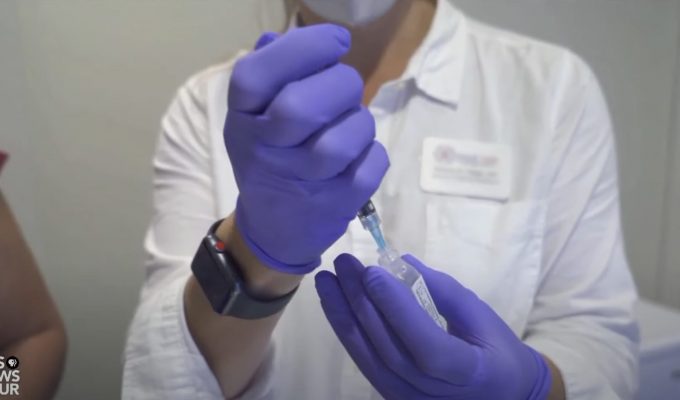 The race to develop vaccine candidates to prevent COVID-19 represents an unprecedented national and global effort. President Trump and some public health experts say encouraging early results from Pfizer and Moderna suggest the approach is working. But there are also questions about the risks of ramping up vaccine research and development at this scale and on this timeline. Miles O’Brien reports.

The race to develop a vaccine or, more accurately, a number of vaccines, is a sprint we have not tried on this scale ever before.

President Trump, his team and longtime public health leaders who were not political hires say that the latest news about Moderna and Pfizer shows that this approach is working. But there are questions about ramping up an effort like this.

Miles O’Brien has been reporting on the larger vaccine search program and those concerns.

In a factory built to fight pandemics, they are going faster and working harder than ever to build the vats and turn on the spigots for coronavirus vaccines.

There’s a big onrush of materials, a big onrush of activity happening in this facility. And we’re currently normalizing our operations around that to ensure that we get as much vaccine produced and out of the door as possible.

Sean Kirk is executive vice president of manufacturing operations at Emergent BioSolutions, a company with a long history manufacturing drugs aimed at big threats to human health, Ebola, Zika, anthrax, and smallpox among them.

We have a lot of experience with some potentially scary organisms, if you will. And we’re bringing that expertise and that capability and that confidence to bear in the fight against COVID-19.

Funded with 628 million federal tax dollars, Emergent is already producing COVID-19 vaccines here in Baltimore. The team hopes to crank out tens to hundreds of millions of doses for their big pharma customers, like AstraZeneca and Johnson & Johnson, before they have finished clinical trials and before approval from the Food and Drug Administration.

It does create the possibility that, if they do not navigate the clinical pathway successfully and they’re not approved, that the material may not be usable.

Meaning it will be incinerated. But there is growing evidence science is not racing down a dead end.

Of the six leading vaccine contenders the U.S. government is shepherding, four are in the third and final stage of clinical trials, where efficacy is tested among tens of thousands of volunteers.

Albert Bourla is Pfizer’s CEO. His company is now completing its application for emergency use authorization from the FDA.

I think we know if it protects against the disease. We don’t know yet, because we haven’t seen this data, if and how many of these cases were severe cases or light cases.

Today’s announcement from drugmaker Moderna is nearly identical, all of this only 10 months after Chinese scientists first published the genetic fingerprint of the novel coronavirus, officially called SARS-CoV-2.

The news brought President Trump into the White House Rose Garden to bask in a scientific victory on the heels of his political defeat.

This far exceeds any and all expectations. Nobody thought they’d get to that level. And we have others coming, which we think will be at equal level, maybe more, if that’s possible.

The Friday the 13th victory lap was more than good luck. In the spring, the Trump administration began funneling $10 billion in federal funding to the private sector, mostly to hasten the hunt for a vaccine.

Derek Lowe is a veteran drug discovery researcher and author of the influential blog In the Pipeline.

People are scared and looking for a silver bullet.

They sure are. And I don’t blame them for a minute.

And we haven’t had a situation like this. People are used to saying, OK, I have got this disease. Where’s the drug? Where’s the cure? Where’s the therapy? We know how to make vaccines for a lot of things, but we have never tried to do it with the clock ticking like this.

Johnson & Johnson, a “NewsHour” funder, is deep in its phase three work on its vaccine.

This is a scientific moonshot. How are you moving so quickly?

Yes, it is a moonshot field, and it’s so motivating for people, for an organization.

Everyone is volunteering their time. You see, everyone sees the challenge in society, but also the disease is in their family, and several people lost family members due to COVID. So, we don’t have to ask people to work weekends and nights. They just show up and do it.

Dr. Stoffels says his team is doing many tasks normally done consecutively in parallel. That’s why, among other things, they’re already manufacturing the unapproved vaccine at Emergent.

But hold on to your masks. It is likely no vaccine will be ready for widespread inoculations before the spring, at earliest. Still, science at this pace has raised concerns a vaccine could be released before it is proven safe.

We have to be clear-eyed about this and that we aren’t taking on extra risk. You cannot have it all. You cannot have the vaccine be the world record for speed and work perfectly and be perfectly safe, not all by the end of the year.

Stoffels and his scientific colleagues in the pharmaceutical industry bristle at the notion that politics have set their timetables.

Have you personally or your company felt political pressure to deliver faster? And, if so, what have you done about it?

We want to say, we work fast, but it’s not under political pressure, and we do what we need to do in order to get to the results to show the safety and the efficacy.

I have never had any pressure from anybody, and I won’t take it either. It will be there when it is there.

And, in fact, Johnson & Johnson and AstraZeneca paused their vaccine trials for a short time because of unexplained illnesses among their volunteers.

In a world where science is moving at breakneck speed to solve a global crisis, tapping the brakes may be the most reassuring news of all.

For the “PBS NewsHour,” I’m Miles O’Brien in Baltimore.