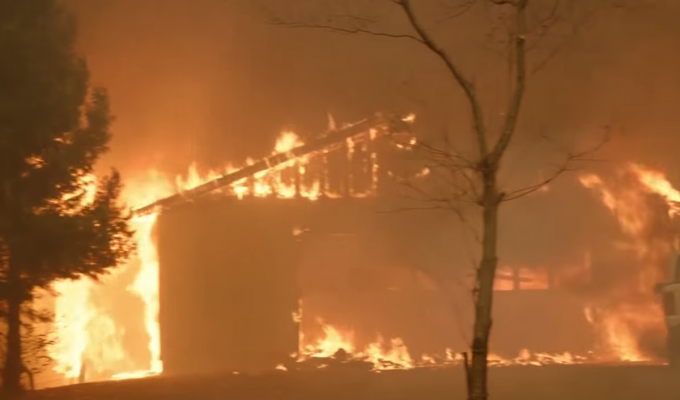 As three major fires blaze in California, we consider some of their causes, both human and meteorological. PBS NewsHour science correspondent Miles O’Brien has been filming a NOVA documentary on megafires and witnessed the Camp Fire not long after it began. He joins William Brangham to describe that stunning experience, along with the broader scientific context around these destructive phenomena.

As we have been reporting, California residents are now realizing that deadly, destructive fires can start any time of the year. William Brangham is back with more on what is driving this new dangerous condition.

As we reported before, three major fires are causing havoc in California, including the most deadly and destructive in the state’s history, the Camp Fire, which is still burning in Northern California.

Over the past six months, our science correspondent, Miles O’Brien, has been shooting a film about wildfires for the PBS science series “NOVA.” It’s called “Inside the Megafire,” and it will air next spring on PBS.

This past week, Miles was there in California filming just as the Camp Fire broke out. And he joins me now.

Miles, it’s great to see you safe and sound.

But I’m just curious what that was like, when you’re there on the ground when that enormous blaze broke out.

Well, William, our day began in Redding, California. We were there to interview some survivors of the Carr Fire back in July.

And on Thursday about 6:00 in the morning, we got word that there was a fire in Pulga, California, about 100 miles away. We had no idea what we were going to be getting into. We made our way down, and we approached on the northern side of the fire on the unincorporated settlement of Magalia.

And, William, there was fire everywhere, houses on fire, trees on fire, smoke everywhere, very few first-responders. But even if there were, it was a reminder that there was no humanly possible way to stop what was happening.

I know that, by all accounts, this was a truly extraordinary event. I believe it burned 80 acres a minute at the very beginning. It’s now consumed — I think it’s over 100,000 acres have been burned.

This — I guess the technical term for this is a megafire, and my understanding is, we’re seeing more of these events. Why is that?

Well, megafires are much more common than they have been.

Just to give you an idea, the seven largest fires in California history have occurred since 2003. So, this is a growing trend. We were meeting up with a fire meteorologist from San Jose State University, Craig Clements.

He and a team have a truck that’s rigged up with all kinds of meteorological gear, including a LIDAR system, which is basically radar with light. He points it at the plume of the smoke. And he’s able to see through the smoke and determine the wind direction and speed and understand some things about the weather.

Fires create their own weather, and they’re also impacted by the ambient weather around them. And this is of great interest to researchers to help them understand how these big fires propagate. They sort of develop a life of their own.

Craig Clements points out that California, when you consider its train, the amount of fuel available, and the weather, is the perfect place for these megafires.

When you have that happen, dry fuels, real strong winds, dry air, and warmer temperatures, that’s the combination for extreme fire behavior. And California has multiple mountain ranges, multiple wind systems, and all sorts of different fuel types.

And we have the most ecosystems of any other place in the United States, and they all burn hot.

So he’s describing this incredible amount of dry tinder to fuel these fires. What are some of the other main factors that drive these big blazes?

Well, we shouldn’t overlook one important factor, which is many more human beings are moving into the woods.

There are now 100 million Americans who live in what is known as the wildland-urban interface, or the WUI, as researchers call it. And 84 percent of all wildfires now are attributed one way or another to a human cause. So, the humans are there, and then they’re causing the fire. So that’s a big part of it.

But there is also the issue of climate change. There is a big stack of research now that links the climate to the incidents of fire. It stands to reason that, if it’s warmer and drier, you are going to have a greater likelihood of fire.

We met up with a researcher at Columbia University’s Lamont Doherty University, Park Williams, who has authored a lot of these papers, and he says the evidence is fairly clear.

So in the last 40 years or, so we have seen the amount of forest that burns any given year in the Western United States has increased by about 1000 percent. That means there’s about 10 times more forest burning this year than there was in a year in the 1970s and 1980s.

This is a huge increase. And that increase has been driven by warming.

President Trump, who we know is a real skeptic about the science behind climate change, has blamed a different factor. He has repeatedly said that the California forest fires are driven by bad forest management.

What does your reporting tell us about that? How true is that?

The blame shouldn’t be pointed at California in particular, and incidentally, environmentalists, as is part of that whole argument. Really, the story goes back about a century and the effort to protect timber and timber interests in the United States.

That’s really how the Forest Service began. And it began a century of very aggressive fire suppression. And what it has done, it has left forests all across our nation as dry tinderboxes filled with a lot of underbrush, a lot of dead trees, and a lot of diseased trees.

It is worth pointing out that these forests over the eons have involved with fire as a natural way to purge things and rejuvenate themselves. So what’s the solution? The researchers will tell you the best way to handle this problem — and it’s not an easy one to solve — is to start thinning out forests, not clear-cutting them for timber, but thinning them out, and introducing so-called prescribed burns.

I met up with a researcher with the U.S. Forest Service, Sharon Hood, in Missoula, Montana. And we went to a couple plots of land where she’s running an interesting experiment. And in one of the plots, they have let it be, 100 years of growth. It’s thick. You can barely walk through it.

Right next it to, 16 years ago, they thinned it out and they burned it. And it’s like night and day.

Our ponderosa pine forest evolved with very frequent fires. We think that these forests here burned every two to 14 years on average of ever seven years. So that’s really frequent.

So removing fire for 100 years allows all these little seedlings to get established. They start growing, and if fires were coming through here routinely, they would kill those seedlings, creating open conditions.

It sounds like it’s certainly working in this demonstration she’s showing you, but the West of the United States is so vast. Is it really realistic that we could thin and clear the hundreds of thousands of acres that is the United States out West?

Well, it certainly won’t be cheap and easy, William. That is a fact.

And if you look at the U.S. Forest Service budget now, over 50 percent of the money they spend is just to battle fires. So there’s really not even any money for them to go into the preventative ideas that Sharon Hood would suggest.

But there is a growing recognition that this is the only way out of this problem. But there is also a lot of opposition to it.

And here’s the irony. The opposition, the most heated opposition comes from the people most affected. It’s the people living in the woods who don’t want to have their view changed by thinning or to have the smoke that’s caused by the prescribed burns.

But what the experts will tell you is, the fire is inevitable. We need to learn to live with it. And it’s a question of whether we want to do the fire on our own terms or wait for something as horrible as the Camp Fire.

And if the trends continue, we’re just going to see more and more and bigger and bigger fires.

All right, Miles O’Brien, thank you very much.

The “NOVA” documentary “Inside the Megafire” will air in the spring of 2019 on PBS.