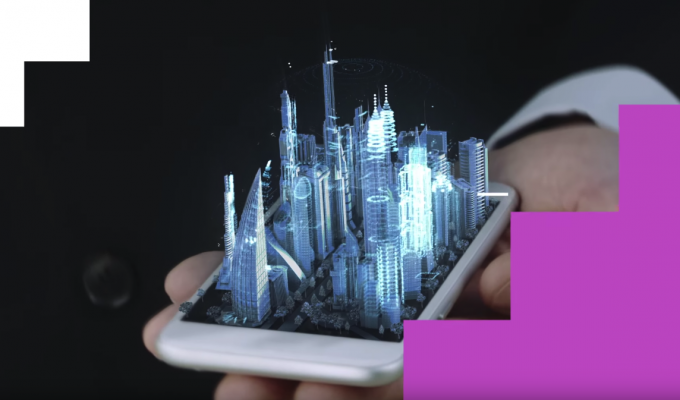 Researchers at the Australian RMIT University have created the thinnest hologram ever– 1/1,000th the thickness of a human hair. In a Nature Communicationspaper published May 18, Dr. Zengji Yue and colleagues describe a record-setting holographic technology they developed that could lay the groundwork for holography to be integrated into our personal electronics.

Though virtual reality and augmented reality are set to dominate the tech world, how cool would it be to be able to experience 3D images without needing special goggles?

Wait, but aren’t holograms 3D? Why are we talking about how thin they are?

When I hear “hologram”, the first thing I think of is Princess Leia. When I was telling Miles about this research, he pointed me to a CNN hologram video from the 2008 election I had never seen before. “Help us, Wolf Blitzer, you’re our only hope!”

Apparently, holograms have been around since the 1940s, when Dennis Gabor accidentally discovered the principle when he was working on X-ray microscopy.

The idea of a holography is to use light to show an object in 3D instead of in 2D. It’s like the difference between seeing a Degas sculpture of a dancer instead of a Degas painting of a dancer.

So, how is this done?

There are two steps to holography, which can be thought of as recording and displaying.

In the recording step, you need to capture the light field as it interacts with an object. That is done by shining light onto an object and imprinting the light that bounces off onto a 2D material of some kind–a kind of special photographic film.

Wait a minute, you say, but isn’t that just taking a photograph?

You’re right, which is why there’s another thing happening at the same time. The light beam shined on the object is split and routed around to the film–so we also get a clean version of the light coming in, sans object.

When the two light waves arrive, they interfere with each on the holographic material, like ripples from two different rocks dropped in a pond reaching the shore at the same time. The result is a different wave pattern–some parts from the ripples add up to make bigger crests, others cancel out to make a suddenly calm patch of water.

Light is also made of waves (sort of…) and their peaks and troughs interact in complex ways when they reach the holographic material, where this interference pattern is imprinted.

Now, for the second step: displaying the hologram. All you have to do, is shine the same light on the holographic material and the hologram will be projected, hovering in mid-air.

How it works is that the incoming light interacts with the interference pattern and bounces off it in the same way as if the recorded object was there. It’s sort of like a mirror–a mirror also bounces light off to create a “virtual image” which you perceive as being behind the pane of glass. A hologram is a very complex mirror that can create an image in 3D.

At the crux of the equation here is the holographic material. To record the interference pattern, it has to be around as thick as the wavelength of the light you’re recording. So, for visible light, that limits you to, at thinnest, a few hundred nanometer thick material. Or around 60 times thinner than a strand of hair.

Yet even that tiny size is too large for modern electronics–my iPhone, for example, runs on microelectronics in the 14 to 16 nanometer range. So, for goggle-free 3D imagery to be used in personal electronics, the thickness needs to be reduced.

Theoretically, this is impossible. In reality, the RMIT team just smashed through the wavelength thickness limit.

Their holographic material is 25 nanometers in thickness, or 1,000 times thinner than a strand of hair. And the way they managed to do it is pretty amazing.

Basically, light travels slower inside this topological insulator than through its surface. What this means is that the light that gets into the bulk material, it keeps reflecting off the surfaces and bouncing around the inside, the same way light bounces off the walls and stays inside a fiber optic cable.

Since the light is bouncing around in the material, it now doesn’t much matter how thin that material is–as long as it can keep ricocheting in there, the light can interact and make the interference pattern needed. The researchers called this an “optical resonance cavity”.

Using this new technology, the RMIT team was able to make some of the smallest, thinnest, and highest-resolution holograms ever created. Not only that, but “our nano-hologram is also fabricated using a simple and fast direct laser writing system, which makes our design suitable for large-scale uses and mass manufacture,” project leader Dr. Min Gu said in a press release.

As a side note, the theoretical physicists who first described topological effects like the ones used here in this new technology were the recipients of the most recent Nobel Prize in Physics–watch Miles explain the science below.

Lead author Yue described the next steps for this technology in a press release: “The next stage for this research will be developing a rigid thin film that could be laid onto an LCD screen to enable 3D holographic display. This involves shrinking our nano-hologram’s pixel size, making it at least 10 times smaller. But beyond that, we are looking to create flexible and elastic thin films that could be used on a whole range of surfaces, opening up the horizons of holographic applications.”

Gu agrees: “From medical diagnostics to education, data storage, defence and cyber security, 3D holography has the potential to transform a range of industries and this research brings that revolution one critical step closer.”

But before you get too excited about Princess Leia popping out of your iPhone anytime soon, it is important to note that a hologram can only record image at a time. So, though there is some headway on making rewritable holograms, Princess Leia’s call for help will be very quiet and very still… at least for now.