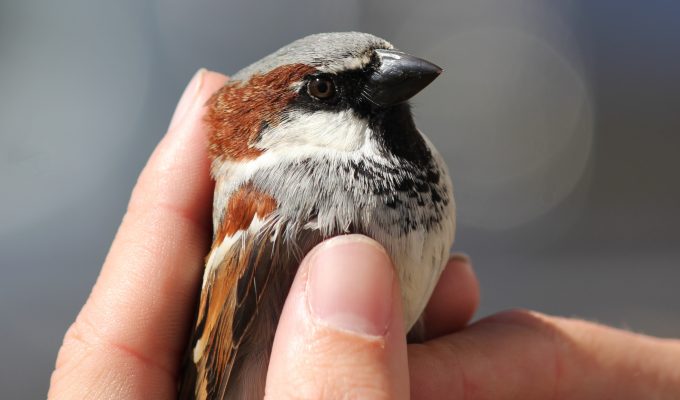 A new study has shown that house sparrows grow to be smaller in hotter climates, giving an interesting perspective on the effect climate change is having on the species that inhabit our world.

In this experiment, a group of evolutionary biologists tracked the growth of almost 2,000 house sparrows in 30 various areas of Australia and New Zealand. They reported their findings on January 24th in the ornithological journal The Auk.

“We found that house sparrows were smaller in hotter parts of Australia and New Zealand,” said Samuel Andrew, biology Ph.D. candidate at Macquarie University and first author of the paper. “This trend could best be explained by variation in summer temperatures rather than winter temperatures.”

The fact that the birds grew to be smaller in warmer climates did not surprise the researchers, since this conforms with the ecogeographic concept known as Bergmann’s Rule, which states that animals in colder climates tend to be larger. This happens because larger animals have less surface area in proportion to their volume, making it easier to retain heat, a big worry in colder climates.

Though house sparrows fit this trend, the researchers were surprised to find that it was the warm summer months, not the cold winter ones, that seemed the more significant factor in determining size.

“The most interesting thing we found was that the amount of variation in size within the populations was highest in populations with high summer maximum temperatures,” Andrew said. “The locations with hot summers also have the longest breeding seasons with multiple breeding attempts that could be exposed to a range of temperatures.”

In a way, this research can be viewed as a model of how certain species would react to a changing climate.

“I think this study is a nice example of how important it is to understand that climatic variables can have different, and sometimes non-intuitive, effects at different life stages of an organism,” said Dr. Elizabeth Scordato, evolutionary biologist at California State Polytechnic University, Pomona, who was not involved with the study.

When we talk about the effect of climate change on different species, we often speak of animals driven to extinction. This is definitely an issue–more than 700 species on the verge of extinction have been pushed there by rising global temperatures and climate change–but there are also organisms, like jellyfish, that have actually benefited from changing ecosystems.

And then there are the species that are evolutionarily clever enough to stick it out. How will these species evolve to deal with a warmer, more extreme world? How will they adapt?

This is one of the reasons Andrew and his colleagues chose to study the house sparrow, a hardy species of bird successfully introduced by humans around the world.

“We are interested in the house sparrow because it has adapted to a massive range of climates, from the Arctic Circle in Norway to the middle of Australia in places like Mount Isa,” said Andrew. “If we can understand the key traits that allow this species to be successful in such a range of climates, then we can do a better job of evaluating which species need the most help when it comes to climate change.”

But determining the root of these key traits is a difficult task, according to Andrew.

“I think that one of the major lessons coming out of this field is that it is very hard to predict how species will ultimately respond to climate change,” agreed Scordato. But determining what kind of response it is could be a matter of species life and death.

“Plasticity typically has limits: organisms can be flexible within some range of environments, outside of which they simply can’t survive,” Scordato said. “Only adaptive genetic change over time will allow them to survive in entirely novel environments.”

Further studies would be needed to determine whether these house sparrow size shifts are genetic or physical. But the reality is that the climate will keep changing, and the animals that don’t go extinct will have to adapt.

“Our study adds to hundreds around the world that show that animals are changing in response to climatic influences,” said Dr. Simon Griffith, head of the lab that conducted this research and a co-author of the paper. “One of the big challenges for biodiversity generally is that the speed with which the climate is changing is faster than ever before, and that means that the capacity of different species to respond is going to be key to determining the extent to which they can cope.”

Scordato agreed: “The complexity and urgency of this issue is why it’s so important to continue to fund a wide range of different types of scientific research on climate change.”