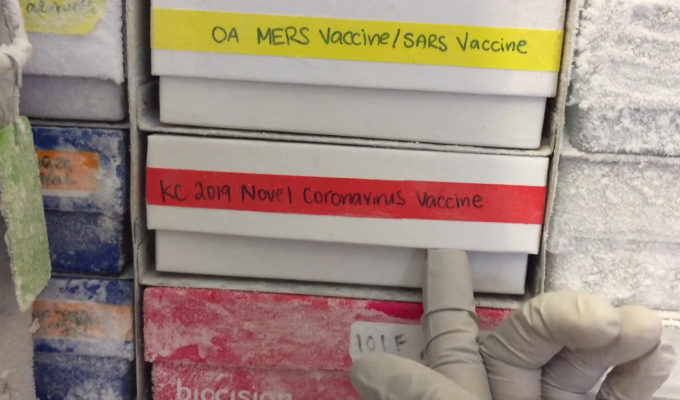 PBS NewsHour science correspondent Miles O’Brien has spent the past few weeks in Seattle, reporting on the COVID-19 pandemic and producing a film for FRONTLINE about how things unfolded in the city where the disease made its U.S. debut. He joins William Brangham to discuss the global push to find an effective vaccine and therapeutic treatments, plus shares a preview of the FRONTLINE special on the pandemic.

Our science correspondent, Miles O’Brien, has spent the past six weeks in Seattle, Washington, reporting on the pandemic and making a film for our friends at “Frontline” about how things unfolded in the city where COVID-19 first landed in the U.S.

William is back, and he talked with Miles in Seattle earlier today.

Before we talk about your “Frontline” film, which is airing tonight, let’s address this public debate that is happening in the country about when to reopen, how to reopen.

And, according to almost all public health experts, until we get a solid vaccine, we’re basically going to be muddling along trying to fight against this virus.

William, it’s all scientific hands on deck all over the globe.

There are 78 confirmed trials under way right now looking for a vaccine to attack this novel coronavirus. There are a couple techniques that are novel techniques, not quite proven yet, which involve using DNA and RNA, the genetic material, to get the immune system response that you want inside the human body.

The Chinese released the genetic sequence of this new coronavirus on January 10. Sixty-three days later, this trial vaccine was being injected into the first volunteer in one study run by Moderna.

Another company with a similar idea, Inovio, says they’re moving as quickly as they can.

I spoke over the weekend with the CEO of the company, Dr. Joseph Kim.

We’re hopeful we will have the immune responses data and safety data from all 40 subjects in June.

And next step will be a larger phase two trial that will test actual efficacy of the vaccine, meaning, how effective is the vaccine in protecting a person from an actual infection? And that will involve around 500 to 1,000 volunteers. And we’re hopeful that we can start that trial early as this summer.

There’s a couple of reasons for that. Number one, they are most at risk, of course. That goes without saying. But, scientifically, because they are so exposed to the virus, it gives them a more concentrated pool of data, a better group of subjects in order to determine one way or another whether these vaccines are working.

So let’s just say we do find a vaccine that does work. That’s one challenge.

The next challenge, of course, is, how do we make the millions and billions of shots needed to cover the planet? How long would that likely take?

This is the part that kind of boggles the mind when you start talking about supply chain.

To imagine producing that in short order, it’s hard to wrap your brain around it. There are people in the philanthropic realm. Bill Gates has indicated he might put some of his money into allowing this production to scale up.

There are private companies, of course, ready to do this. But, ultimately, it’s going to require the government, philanthropy, and private companies working in concert if we’re going to ramp up production to meet this need, which, after all, there is no bigger need than the planet.

Short of getting that vaccine, of course, there’s — we have got to treat the people who are sickened with COVID-19.

And there’s a lot of work on these antiviral drugs and other medications. I know that’s part of what’s in your “Frontline” tonight. Can you tell us a bit more about that?

Yes, it’s — one of the antiviral, remdesivir, one of the possible treatments for coronavirus, came into play with patient number one here in the Puget Sound area.

And, by the end of January, he’s in a hospital in Everett, Providence Regional Hospital there, and starts to deteriorate. And this is where we pick up the story with the clinician who was in charge of his care, Dr. George Diaz.

Patient one was slipping fast, and there was no known treatment.

Dr. Diaz told me he heard about an antiviral drug called remdesivir that some experts thought could potentially help. It would be an experiment, he said, but the patient was willing.

At that point, I contacted the FDA, and Gilead, the manufacturer, to see if they would approve it.

So, the FDA gave us an approval to try it on a compassionate-use basis, knowing that it had not been approved yet and that there were no trials available to base that decision on. We infused it the next day. He was still having very high fevers and still was requiring oxygen the day that we gave it to him.

By the next day, his fevers resolved, and they stayed gone. He felt much better. He felt like he had started beating the virus.

It was a stunning apparent recovery linked, potentially, to remdesivir.

But, bear in mind, at this point, William, this was an anecdote, purely a case, one data point in the whole globe. So, this had Dr. Diaz very intrigued, of course. And so he almost immediately got involved in some of the clinical trials that are under way on remdesivir, people who are exposed and dealing with COVID-19 disease.

And there are multiple trials all around the globe right now under way. And we don’t have any firm data yet, but everything we’re hearing is optimistic indications, including — there was a leaked account that came out of Chicago, doctors expressing great optimism that they were having good efficacy with remdesivir beating back this virus and allowing people to recover.

It’s important not to do — get too far ahead of these things. We want to have good science. But, ultimately, if there is really strong indications, it’s possible they will just stop the trials and start giving this drug to people who are really sick with COVID-19.

All right, Miles O’Brien, we will be watching the film tonight.

Thank you very much.

And a reminder: Miles’ film, “Coronavirus Pandemic,” airs tonight on “Frontline” on PBS.