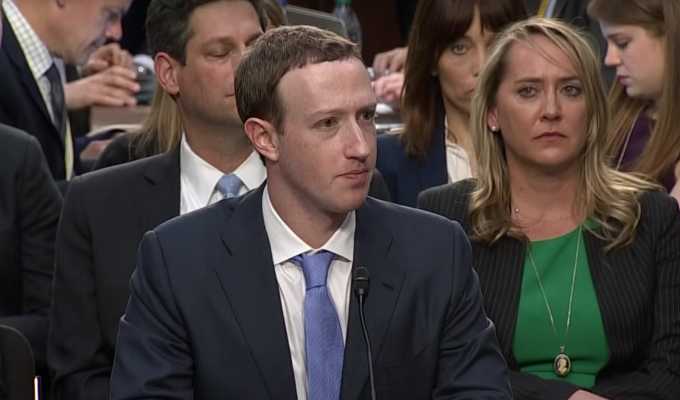 Mark Zuckerberg, CEO of Facebook, spent ten grueling hours answering questions from lawmakers on Capitol Hill in the wake of the Cambridge Analytica scandal. Members of Congress wanted to know: what data does Facebook collect on its users? How does the social media giant use that data? What does Facebook do to protect its users’ data? After Zuckerberg finished testifying, we talked about it on the PBS NewsHour:

We have been following the world of junk news, fake news, false news–however you want to call it–since the 2016 election. We will soon be rolling out a four-part series on this for the PBS NewsHour, please tune in!

For a sneak peak, listen to the Miles To Go podcast. In Episode 6, we talked to Facebook’s head of News Feed analytics, Dan Zigmond–some interesting insights there. And in Episode 7, we talked to danah boyd, who helped us untangle the web of misinformation on the internet.

Facebook founder and CEO Mark Zuckerberg finished his visit to Capitol Hill with another long hearing today. It again lasted hours and included some tough questions.

All in all, Zuckerberg spent 10 hours testifying over two days. And while some of the lawmakers clearly are not fluent with Facebook and other platforms or the way they work, Zuckerberg still faced new levels of skepticism.

Amna Nawaz rounds up of some of the key takeaways, which has become the focus of this week’s segment on the Leading Edge of technology.

Even after hours of questions and answers, there are still lingering questions on some key issues about Facebook does business.

Miles O’Brien has been watching all of this closely. He’s also been working on a series for us about the problem of false news and recently got rare access inside Facebook to see how it’s grappling with those issues and others.

He joins me now from San Diego.

Miles, thanks for being here.

Let’s talk about data, data collection. It’s at the heart of their business model at Facebook. And Mark Zuckerberg was asked about that a number of times over the hearings over the last couple of days.

I want to play for you one exchange from earlier today with Congresswoman Kathy Castor of Florida and get your take on the back end.

You are collecting personal information on people who do not even have Facebook accounts. Isn’t that right?

Congresswoman, I’m not sure that — I don’t think that that’s what we’re tracking.

I don’t think that the average American really understands that today, something that fundamental, and that you’re tracking everyone’s online activities, their searches. You can track what people buy, correct?

You’re collecting that data, what people purchase online, yes or no?

In fact, you have patented applications to do just that, isn’t that correct, to collect that data?

Congresswoman, I don’t think any of those buttons share transaction data.

You watch where we go.

Senator Durbin had a funny question yesterday about where you are staying, and you didn’t want to share that. But Facebook also gathers that data about where we travel, isn’t that correct?

Congresswoman, everyone has control over how that works.

So, Miles, after two days of testimony, do we have a better understanding of how Facebook collects data?

Well, you know, Amna, that was an exchange that had a lot of us scratching our heads.

This idea that Facebook gets a lot of data from us as Facebook users, I think we all have come to learn that. And if we haven’t learned that by now after a couple of days of listening to Mark Zuckerberg, Facebook is an amazing data-gathering machine. They know an awful lot about us and can use that with great precision to make an awful lot of money.

But the idea that they’re out there in the greater Web, gathering information on people who are not on Facebook, ostensibly, according to Mark Zuckerberg, for security issues, to avoid people trying to break in, but what we really think the main driver for all of this is to grow the company.

It’s a marketing tool. If you have ever signed on to any service and they say, hey, there are some people you know who might want to be a part of this, how do they know who those people are?

And this is a data-collection technique which goes beyond Facebook, which is — makes, I think, all of us a little bit uneasy.

And you mention, of course, that people are signing up for this service. This is something people actively seek out, they agree to take part in.

I want to play another little piece of sound for you. This one is from yesterday, actually. And it goes to the point what people are actually agreeing to when they sign up to use a service like Facebook.

Let’s take a listen to this from yesterday.

Here’s what everybody’s been trying to tell you today, and I say this gently. Your user agreement sucks.

I’m going to suggest to you that you go back home and rewrite it, and tell your $1,200-an-hour lawyer — no disrespect, they’re good — but tell them you want it written in English, so the average American can understand it. That would be a start.

Senator, as someone who uses Facebook, I believe that you should have complete control over your data.

Are you willing to go back and work on giving me a greater right to erase my data?

Senator, you can already delete any of the data that’s there or delete all of your data.

Are you willing to expand that, work on expanding that?

Senator, I think we already do what you’re referring to, but certainly we’re always working on trying to make these controls easier.

So, Miles, there’s a very real issue of consent here, right, what people are agreeing to. Is the responsibility with the user or with Facebook?

Well, I think we all like to think the responsibility should be Facebook’s to inform us as to what we’re getting into. And, technically, that’s what they do. It’s just several thousand words of fine print with hypertext.

It’s an onerous document to get through. And I think we all know, in the real world, most of us just click accept and move on. I think the senator is on to a key point here. If it could be brought forth to people in simple terms, with the opportunity to opt in to sharing, as opposed to having to root through and opt out in the direction of privacy, it would be much more consumer-friendly.

This is, after all, a corporation that pride itself on a utopian view of bringing the world together. A document like that doesn’t seem like a warm, fuzzy thing.

And its size and scope is exactly why we also had the conversation around regulation in hearings in the last couple of days.

A lot of people were surprised that Mark Zuckerberg seemed to concede that he would be open to being regulated. I want to play a little bit of sound about what he had to say about regulation today.

On your point about regulation, the Internet is growing in importance around the world in people’s lives, and I think that it is inevitable that there will need to be some regulation.

So my position is not that there should be no regulation, but I also think that you have to be careful about what regulation you put in place, for a lot of the reasons that you’re saying. I think, a lot of times, regulation, by definition, puts in place rules that a company that is larger, that has resources like ours, can easily comply with, but that might be more difficult for a smaller start-up to comply with.

So I think that these are all things that need to be thought through very carefully when thinking through what rules we want to put in place.

So, Miles, there’s a lot of questions about regulations in Europe that go into place this spring. But when it comes to Facebook here in the U.S., what could regulation look like?

Well, it could be nothing, because of what you just referenced.

You know, Facebook, after all, is a global enterprise, two billion customers, bigger than any country itself. And wherever the regulation sets the high bar becomes tantamount to regulation for the world.

And Zuckerberg admitted that it will become universal, the rule of Facebook world, based on what happens in Europe on May 25, wherein they will make a series of changes that will improve user control over their own personal data, and further notifications if data is breached, that sort of thing.

So it does change the rules, and Congress doesn’t have to do anything. We should point out another thing here. There is a loophole which allows companies like Facebook to turn a blind eye to content. It was set up to allow YouTube to avoid lawsuits for copyright infringement.

And that allows Facebook to say, hey, we are not a publisher. We are not a media enterprise. We are a technology company.

This serves them well as they make this statement that they can’t control what — the content. And, really, Facebook has evolved into the public square for the planet, and perhaps it has evolved into a point where it has to take greater responsibility for the content, which is not embodied in this regulation and in this loophole.

So that might be something that Congress and others will be looking at.

And we will be looking at it as well.

Miles O’Brien, good to talk to you.