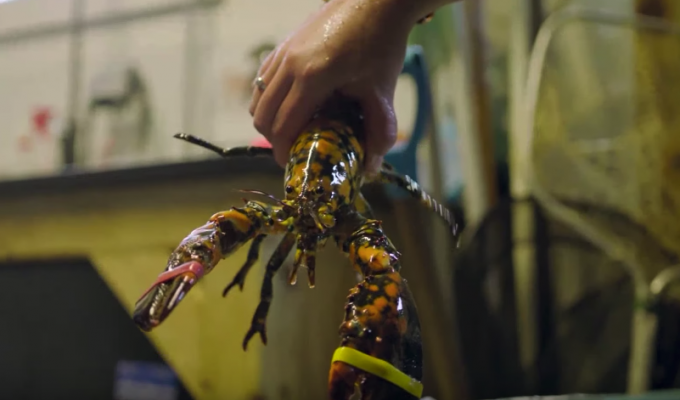 The Gulf of Maine is known for lobsters, which form the foundation of an industry critical to the state’s economy. Due to climate change, the waters off southern New England have become too warm for the temperature-sensitive crustaceans, leaving Maine as the “sweet spot” for fishing them. But the Gulf’s own rising temperatures mean the lobster boom may not last forever. PBS NewsHour science correspondent Miles O’Brien reports.

Speaking of climate change, our next story looks at the impact it’s already having, specifically in the Gulf of Maine.

The region is known for lobsters in those waters. Last week, we told you about the unexpected fallout of tariffs in the lobster business.

Tonight, Miles O’Brien explores what the warming of the oceans means for these crustaceans, the industry, and the larger ecosystem.

It is part our series on the Leading edge of Science and our contribution to Covering Climate Now, a global collaboration of more than 300 news outlets to enhance coverage of the climate story.

For Maine lobsterman Steve Train, the hard work aboard the Wild Irish Rose begins dark and early about 150 to 200 days a year.

I fish year-round. This boat can’t go without me on it. If I don’t work, my helper doesn’t work, there’s no paycheck.

He’s been setting his traps about four miles northeast of Portland for 30 years. Fewer competitors here.

I would just come out here and get away from fish over here. You catch a little less, but you are all alone. You didn’t have a problem.

In the Gulf of Maine, which spans from Cape Cod to Nova Scotia, lobster fishing has been anything but a problem for decades. In fact, warmer water caused by climate change has spurred an epic run here.

Estimated lobster abundance in the gulf rose more than 500 percent between 1985 and 2014. Meanwhile, in Southern New England, abundance decreased 78 percent from 1994 through 2014, almost a complete collapse.

Scientists say this too is the result of rising ocean temperatures caused by climate change.

We have sort of averaged really warm years.

Rhode Island is really inhospitable for lobsters. It sort of shift the optimum temperature. Now it sort of locked in on the coast of Maine, and then Maine, with a really great lobster habitat, has boomed.

So, Maine is in the sweet spot, at least for now?

Right now, yes. And then the question is, how much longer is that going to continue?

Like all cold-blooded animals, lobsters are highly temperature-sensitive. And the Gulf of Maine has warmed faster than 99 percent of the world’s oceans.

As the glaciers in Greenland melt, more freshwater flows into the North Atlantic slowing down the Labrador Current, allowing more warm water into the gulf. And that is why the water temperatures here are rising so much faster here.

So, it’s a lot like a bathtub where, if you turn down the cold tap, turn up the warm tap, you get a really, really hot bath.

It’s an extraordinary change that’s happened really quickly in this region. And so now we’re trying to watch how the system responds. We’re trying to figure out what does it mean for us and how we make decisions about the ocean.

Much is at stake. The American lobster is the most valuable single species fishery in the U.S. and Canada. Eighty percent of the U.S. catch ends up in Maine, where lobsters loom larger than life.

So the state is investing in some serious science to better understand the life and times of Homarus americanus.

Jes Waller is a lobster research biologist with the Maine Department of Marine Resources.

There’s still questions about how they grow, where they move, how they reproduce, how they find each other in the environment.

We’re still working on a lot of that. But that’s why it makes it an amazing thing to study, is because there’s really endless questions.

She is focused on lobsters in the early stages of their lives. A mother like this one can produce 10,000 eggs a year that she nurtures under her tail. Once they hatch, the larvae move toward the surface.

Finding them in the wild is like looking for a needle in a haystack.

So, even though a mom can produce 10,000 of these guys, still hard to find them?

Still hard to find them. The currents take them everywhere. Once they’re able to swim, they are really looking for the perfect environmental conditions in which to grow and settle to become those juveniles.

So, there’s just a million factors that dictate where they go and how likely we are to find them on a given day.

Only about one in 10,000 will live long enough to reach harvestable size and possibly your dinner table. The diet of an adult lobster is no secret.

Lobsters are carnivores. They feed really on other animals, and they’re horribly cannibalistic. So, they eat also their brothers and sisters pretty regularly.

But David Fields is more interested in what lobsters eat when they are tiny. He is a senior research scientist at the Bigelow Laboratory for Ocean Sciences. He spends a lot of time analyzing what is in the guts of lobster larvae.

When you open up the slurry inside of a gut, it’s a little bit difficult sometimes to identify who’s in there. They’re eating really small animals that digest and mix up pretty quickly.

So, opening them up and poking through there is a good first step, and it’s a traditional method. The second way is to pull a sample out of that and look at the DNA and match the DNA inside there to the DNA of organisms that are out in the wild.

A prime suspect in this hunt is a tiny crustacean called Calanus finmarchicus. They are a key link in the food chain in cold water ecosystems, a staple from everything from herring to endangered right whales.

Calanus are also very sensitive to rising temperatures. That might explain the mystery that fisheries ecologist and zoologist Rick Wahle is trying to sort through. He leads the University of Maine’s annual lobster settlement survey.

In recent years, he and his team have found many fewer juvenile lobsters on the seafloor. It could be the first indication a population decline is under way.

The other thing that people are thinking about is, the warming has actually expanded the acceptable habitat for the juveniles down into some deeper waters, where maybe couldn’t have survived before.

And so you might just be sort of stretching that population over a larger area.

Researchers hope all their efforts will result in better models that can lead to improved fishery management.

As it is, Maine lobstermen are extraordinarily good at self-policing their industry. They toss back small ones and the big ones. Females with eggs get special treatment. Their tails are notched, marking them as off-limits.

That lobster can’t be retained. We have to throw it back. It doesn’t have eggs now. She probably did at one point. And even if she didn’t, it doesn’t matter. We can’t keep her.

All of this helps, but lobstermen like Steve Train can’t help but wonder if the big boom is now past its peak.

We’re not getting what we used to. And it’s not like it’s off 10 percent. You know, it’s off 30 percent, 40 percent. Our dailies are off, but they were late. They hit later than they used to.

So, we have had a big change. And this year is more like a long time ago, just not what we’re used to. But everyone seems to be crying as much as I am.

For now, the models predict, over the next 30 years in the Gulf of Maine, there will be a steady decline of lobsters to pre-boom levels. After that, it’s up in the air, and up to how much carbon we keep putting in it.

If the warming continues unabated, the lobsters will move on, and so will a way of life.

For the “PBS NewsHour,” I’m Miles O’Brien in Portland, Maine.