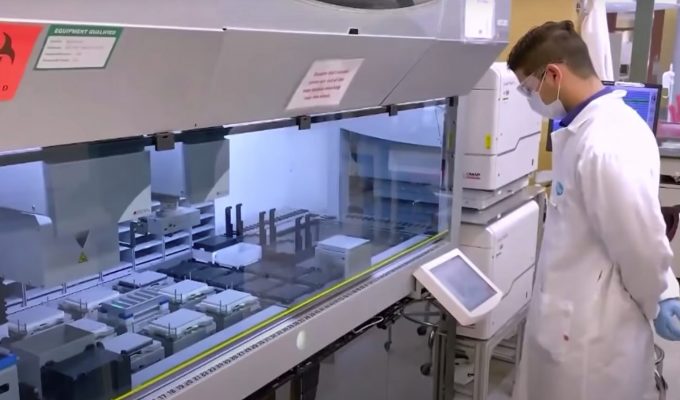 The question of when a COVID-19 vaccine might be available is perhaps the most pressing in the world. There have been a number of recent headlines on this front, including early but encouraging results from trials. And on Wednesday, the Trump administration awarded a contract to Pfizer and a German biotech firm to potentially deliver doses this year. PBS NewsHour science correspondent Miles O’Brien joins anchor Judy Woodruff to discuss.

It might be the most pressing question in the world: When will we have a COVID vaccine?

This week has seen a number of headlines on this front. And, today, the Trump administration awarded a nearly $2 billion contract to Pfizer and a German biotech firm to potentially deliver 100 million doses by the end of the year.

There have also been early, but encouraging results from other trials.

Miles O’Brien is here to help sort through it all for our reporting on the Leading Edge of science.

So, Miles, hello to you.

You have been spending a lot of time on this. Tell us, how soon is it thought that we might have a vaccine, and how much vaccine are these companies that are developing them promising?

Judy, it’s just unprecedented, when you think about it.

Here we are, about six months since the Chinese published the genetic code of the SARS-CoV-2 virus, the novel coronavirus, and, currently, there are about 140 vaccine ideas, not in human trials, and about two dozen in the midst of human trials.

Now, yesterday on Capitol Hill, representatives of three of the big pharma companies testified before Congress and indicated they are prepared to begin mass testing on humans to see if these vaccines are effective by the end of the year.

And I can tell you, no one would have predicted this six months ago.

If they’re moving this quickly, though, Miles, how do we know that they’re not cutting corners?

Well, they are cutting corners, but they say not on safety.

What they’re doing, Judy, which is kind of clever and risky, is, they’re manufacturing vaccines that they are currently testing. The idea is, if they go through the trials and they’re effective and they’re protective and they get the green light, the pump will be primed.

And if not, if they don’t work, they will just have to incinerate and just take that risk. Now, members of the Congress on that committee are concerned that there might be pressure on the FDA, political pressure, to green-light a vaccine that may not be protective enough sometime this fall, perhaps even before the election.

The bar set by the FDA is 50 percent. That means at least 50 percent of the people who are inoculated would have some defenses against this novel coronavirus.

Now, here’s a short excerpt from the committee chairman, Frank Pallone, Democrat of New Jersey — he’s chairman of the House Committee Energy and Commerce — along with Macaya Douoguih, who is with Johnson & Johnson.

I want you to kind of assume what, unfortunately, shouldn’t happen, which is, you know that the FDA is approving the drug, even though it’s only 10 percent or 20 percent effective.

Will you tell us that? Do you feel an obligation to tell us that and give us that information?

We would design our trial actually to target the efficacy that’s outlined in our target product profile.

The study would fail if it hit 10 percent. We would make those results available, but we would not feel comfortable bringing forward a product that did not — that was not found to be efficacious according to what we put forth in our protocol.

The one advantage in all of this, Judy, is the nature of science. It is the open enterprise, and transparency is what it’s all about.

And if there was an attempt to make any of this secret, it’s hard to overstate the hue and cry from researchers. And the other thing is, too, if people are going to confidently take these vaccines, you need transparency, so they understand what’s in them, and what the side effects might be.

So, Miles, what is the latest information in these peer-reviewed journals? And is there reason for optimism?

There were three papers that dropped early this week, two of them peer-reviewed in the British journal The Lancet from the Oxford-AstraZeneca team, CanSino team, and then some preliminary results from the Pfizer-BioNTech team.

And, in all cases, no serious side effects, aches and fever, that sort of thing that you might get after a vaccine, but nothing serious, nothing adverse.

And here’s the key thing. They have all generated what appears to be a pretty solid immune response, with antibodies, which in — they go after the virus itself, and T-cells, which are in our blood system, and they are designed to go after the cells that have been infected with the virus and kill them.

So, all these vaccines are in a position to go to what they call phase three trials, meaning large numbers of people, to see if they’re protective enough.

We’re talking about studies of 30,000 people or so. And that will determine if the vaccine is good enough to be released to the public.

And, Miles, when we talk about dosages that people would receive, we’re talking about two doses of a vaccine per person. Is that right?

So far, those three contenders we’re talking about and the ones that are at the later stages all, it appears, would require two doses, which, of course, complicates things. We are talking about, after all, potentially the entire planet needing it, seven billion people times two. That’s a huge supply chain issue, to say the least.

This brings us to an important point. We don’t know how long the antibodies effect, the T-cells effect, the immune response will last. There’s no shortcut on the long-term efficacy of these vaccines.

Chemist Derek Lowe is a veteran new drug investigator, and he is the editor of a very influential blog called In the Pipeline.

There is nothing in those papers, and there is no way there could be anything, because that is one of the major unsolved questions in vaccine work and in immunology in general, is, how long immune memory lasts and why it lasts longer in some cases.

We are just going to have to wait it out and keep an eye on it and say, OK, we are now recommending our booster at the two-year level, or whatever, or we may have another vaccine by then we like better.

But there is no other way now than to just wait and see. It’s frustrating, but that’s the state of the art.

And the same goes for safety, too, Judy.

There’s no way to do a shortcut on that. There could be some long-term effects of these vaccines. It’s highly unlikely, but researchers say, given the global pandemic and the emergency surrounding it, this is probably worth the risk.

So, it does sound promising.

But, Miles, what is known about how much this is going to cost and who’s going to pay for it all?

But the question is, how will the dosages be paid for at the other end? At the congressional hearing yesterday, executives from Pfizer, Moderna and Merck said they would, in fact, be seeking a profit on these vaccines.