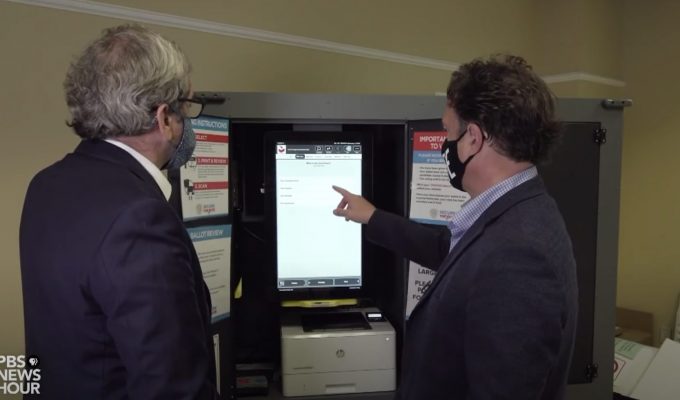 Protecting the American voting process from outside interference is a top priority this election season. But public and political opinion are divided over the best voting systems to prevent tampering. Miles O’Brien takes a look at the latest technology being used in Georgia — and whether it provides a stronger defense against meddling than the traditional paper ballot.

Protecting the voting process from outside interference is a high priority this election season.

In his latest report, Miles O’Brien looks at some of the latest technology being used in Georgia, and whether it provides a stronger defense against tampering than the traditional paper ballot.

It’s part of our ongoing Leading Edge series on science and innovation.

In Georgia, early voting turnout is high, the presidential race is a toss-up, and both Senate seats are in play. So, naturally, the political world is nervously watching what voters here will do, while, in the world of computer science, they are tensely tracking what the voting machines will do.

Georgia is kind of a petri dish.

Alex Halderman is a professor of computer science at the University of Michigan.

There’s a lot more we have to learn about Georgia’s election system. And that’s going to help inform how to better secure elections, not just in Georgia in November, but across the country for years to come.

He’s among a handful of independent election security experts getting unprecedented access to the inner workings of the state’s $107 million voting system rolled out earlier this year.

They have set up a complicated system, which is centralized, and doesn’t seem to have any safeguards.

This is the Poll Pads. On Election Day, it is used to check in voters.

Rick Barron is Fulton County’s director of registration and elections. He gave me a demo.

It tells whether we issued an absentee-by-mail ballot, whether somebody’s voted early, whether they have voted that absentee ballot, or whether they are still eligible to vote.

Once a voter is deemed eligible, the iPad activates a magnetic card, which in turn unlocks a so-called ballot marking device, or BMD OK.

This is a pretty complicated way to do something you could do with pen and paper.

There are advantages here, right?

Yes. The advantages are, it puts a true mark on the screen.

When done, the voter prints a ballot. Selections are recorded in human readable text and in a Q.R. code, which is read and counted by an optical scanner.

Georgia’s secretary of state, Brad Raffensperger, says this is more accurate than pen and paper.

The problem with pen and paper is, sometimes, you have your instructions on what you’re supposed to do, but you end up with spoiled ballots.

Sometimes, people will put an X here, but then they circle this one here, or they will make different marks on it. What did they really mean there?

Still, elections officials tell us they seldom see a hand-marked ballot where they can’t determine voter intent. In 2019, Georgia bought the devices from a Canadian company called Dominion Voting systems.

They replaced paperless machines like these made by a now defunct company called Diebold Election Systems. A federal judge forced the state to scrap the discredited devices. Election security activist Marilyn Marks was part of the lawsuit that triggered the change. But, for her, ballot-marking devices, now used widely in 14 states, are not the ideal remedy.

We need paper records that are marked by the voter, with the voter’s own hand, where we know that was recorded the way that the voter wanted it recorded.

So, she and the other plaintiffs took aim at the new voting machines. The lawsuit came into sharp focus after their chaotic debut in the June primary.

The Poll Pads took as long as 30 hours to download the voter database, displayed the wrong races, and would randomly shut down. And the power-hungry ballot-marking devices blew circuit-breakers in numerous locations.

Poll workers, many of whom had no hands-on training because of the pandemic, were often befuddled by the new technology.

We have learned a lot of lessons. We’re putting technicians in every single polling place.

We have to make sure that not only do the poll workers know how to use the equipment, but then these technicians are then going to be relied upon to fix any issues. We want to just fly under the radar and do our jobs and stay away from the news.

But election experts working for the plaintiffs in the lawsuit against the state have uncovered several troubling issues.

Alex Halderman looked closely at the Q.R. codes where the votes are encoded for the scanner.

By analyzing the structure of the Q.R. codes, I have been able to learn that there’s nothing that stops an attacker from just duplicating one, and the duplicate would count the same as the original bar code.

And in late September, another concern came to light. During testing, election workers found half the names of the 21 candidates for Senate intermittently disappeared from screens during the review phase.

I’m worried that the Georgia system is the technical equivalent to the 737 MAX. They have just made a last-minute software change that might well have unintended consequences and cause even more severe problems on Election Day.

Despite all the concerns, federal Judge Amy Totenberg decided to let the election proceed with the ballot marking device system. The secretary of state says post-election audits will bring any Q.R. code discrepancies to light.

We’re in the process of really continuing to expand the capabilities that we have, so we can audit more of the races. When we do the audit, we actually do it on the human-readable portion, and not on the Q.R. code.

Alex Halderman and his team at Michigan conducted a mock election to see if voters are likely to catch mistakes on the printouts. Only 7 percent spotted a deliberately planted error. So, double-check your ballot before you scan.