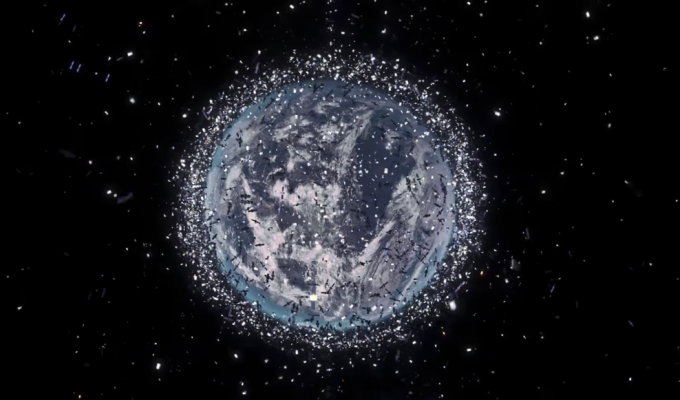 This week, aerospace engineers, scientists, and professionals gathered in Darmstadt, Germany for the 7th European Conference on Space Debris hosted by the European Space Agency (ESA). No, this is not science fiction–though the images on the website would not be out of place in the new Star Wars teaser.

Space debris is a serious issue for the aerospace industry: more than half a million splintering pieces of old satellites, rocket boosters, and other manmade equipment are orbiting our planet right now–and that’s only those that are being tracked. In uncharacteristically imprecise terms, this is what the NASA page for space debris says on the subject: “There are many millions of pieces of debris that are so small they can’t be tracked.”

Considering this space debris zips around at speeds of up to 17,500 miles per hour, even the tiniest specks of material can prove hazardous to functioning spacefaring equipment–rogue chips of paint have been known to cause damage to space shuttle windows. To avoid the nightmare scenario of an astronaut being pierced with miniscule shrapnel, the NASA flight controllers routinely move the International Space Station out of harm’s way based on warnings from U.S. Space Command, which tracks every piece of debris larger than a fist.

Obviously, this is not to mention the possibility of larger collisions, such as the one between a dead Russian satellite and a working U.S. one in 2009. Exacerbating the problem are military shows of force like the 2007 Chinese anti-satellite missile test, which broke an aging Chinese weather satellite into 3,000 additional chunks of space debris. There’s no shoulder for these damaged spacecraft to pull over on and park, and no clean up crew to clean up the resulting fragments that, in the microgravity of orbit, spew every which way after a collision.

This is what attendees of the ESA conference are worried about: space near the Earth is getting clogged up, especially with the growing rate at which we’re launching a greater number of smaller satellites.

“In all of human history, ESA’s debris chief said at the conference, about 7,000 spacecraft have left Earth. He pulled up a slide of 12,000 new satellites set to go up soon, announced by companies such as Samsung and SpaceX,” Avi Selk wrote for the Washington Post. “But these tiny satellites have big problems, according to experts at the conference. There will be lots of them, for one thing. And since they can’t navigate, they’ll keep careening through space long after they’ve stopped working and are thus more likely to collide with other things.”

As the amount of objects orbiting our planet increases, so does the likelihood for a disastrous chain reaction of collisions. Known as the Kessler syndrome, this idea of fragments from one collision causing a whole slew of other space accidents has been around since the 1970s, but is now beginning to legitimately worry the industry. If something like it were to happen, space junk would make a messy shell around our planet. We would lose many of our satellites and our door to the universe would slam shut in our collective faces.

Cleaning up space debris is a daunting challenge, and that’s in part what conferences like ESA’s aim to discuss. There are established best-practices for how best to lay dying satellites to rest, but new ideas have to be developed for the plethora of tiny satellites that are starting to go up.

Hope may be on the horizon: cleaning up space debris is the most popular potential future project for the XPRIZE Foundation, which incentivizes innovation through large cash prizes. No word yet on a cosmic vacuum cleaner, but someone should figure that out sooner rather than later.

Watch this awesome video that ESA put together for the conference below: